Sophie leading students in the School Strike 4 Climate march to Parliament in Wellington in 2019. Photo / Supplied On September 27 2019, the day of Aotearoa's School Strike for Climate, the atmosphere throughout the country was electric. One of the key people responsible for organising the nationwide event, one of several in 2019, was Wellington-based climate activist Sophie Handford who, at the time, was 18-years-old.

"Climate change puts everything that we love at risk," she says. "This moment, right now, is a defining moment in the history of all living things." Sophie was galvanised to reach out to her peers and organise the event after coming across Greta Thunburg and the Australian strike movement early last year.

"I didn't want to wait for someone else to take this on," says Sophie. "I gathered some friends from my high school and we put together a Facebook, Instagram and website to spread the message. We got people to sign up online and through this, developed a network of local organisers from all corners of Aotearoa."

Last year was huge for the now 19-year-old. Organising the strike proved to be award-winning in November, as she jointly won the supreme award at the 2019 Wellingtonian of the Year awards, along with International Muslim Association of New Zealand president Tahir Nawaz.

An even bigger milestone preceded the win: Sophie was elected to the Kapiti Coast District Council earlier that month, one of the youngest councillors in our history.

It's looking to be another stellar year for Sophie, who is back from overseas after attending an environment-focused youth leadership programme called Ship for World Youth.

Now working two jobs as the Paekakariki-Raumati ward councillor and as a support worker at the GO Club, a science and technology group for girls between the ages of 6 and 12, she has her hands full but passion is a driving force.

"I do everything I do because I cannot sit back and watch things crumble when I know that we have the power to do something about it and transform things into something beautiful."

Sophie says it was never her aim to become an elected representative but has embraced it as a way to ensure sustainable decisions are being valued. "I think one of the biggest challenges to grapple with is figuring out how we can change mindsets and create system change. At this moment, I'm trying to do this through putting pressure on political leaders but also through my own actions." 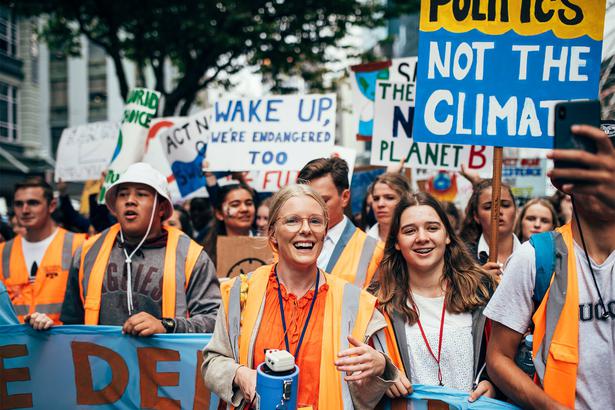 Sophie leading students in the School Strike 4 Climate march to Parliament in Wellington in 2019. Photo / Supplied

This year being election year, she's feeling especially motivated and is keen to see emissions decreasing in 2020. Driving the conversation in a positive way is crucial, she says.

"One of the most pressing issues facing young people in New Zealand today is the mental health crisis. High rates of anxiety and suicide are a huge concern and need addressing. The climate crisis has the potential to negatively impact the already high numbers, which is why I think it's important we empower people through our conversations about climate change."

READ: How To Set Up Your Own Home Composting System: All Your Questions Answered

Sophie is excited to continue working alongside other young people who inspire her, and she'll also be trying to prioritise her own health and self-care. "I think this is important for activists and for everyone actually," she says, "because it's hard to shine your torch for a cause when the torch inside of you isn't shining.”

One of her favourite ways to wind down is to swim in the ocean, so it seems nature is never far from her thoughts.

It's been a decade since former designer Doris de Pont launched the New Zealand Fashion Museum, and began shining a new light o...