Julian Fellowes’ long-awaited new series is a gritty take on life in a council block in Luton. Just kidding! The Gilded Age is, obviously, a lavish period drama featuring beautiful frocks and heavy curtains and characters who say Dynasty-esque lines such as: “I may be a bastard, Mr Thorburn, but you are a fool, and of the two I think I know which I prefer. Good day to you, sir.”

It is set in 1880s New York, and chronicles the clash between old and new money. Made primarily for a US audience on HBO, its producers — who include Downton Abbey’s Gareth Neame — are at pains to remind viewers that this is from the Downton stable. The opening scenes take us below stairs to a flustered cook and a butler very similar to Downton’s Mr Carson.

Upstairs, the imperious Agnes van Rhijn (Christine Baranski) lives with her kindly sister, Ada (Cynthia Nixon). Agnes is appalled at the newcomers moving into the grand mansion across the street: robber baron George Russell and his hyper-ambitious wife, Bertha (Morgan Spector and Carrie Coon). Meanwhile, Agnes and Ada’s penniless Pennsylvanian niece, Marian, comes to live with them after her father dies. Marian is played by Louisa Jacobson, who may have picked up some acting tips from her mother, Meryl Streep, and here makes a very strong television debut. Like us, Marian is a newcomer to this world, navigating its social mores. Agnes schools her on the class divide: “We only receive the ‘old’ people in this house. Not the new. Never the new. The old have been in charge since before the Revolution. They ruled justly until the new people invaded.”

It is handy to keep reminding oneself of this, because to 21st-century eyes there is little material difference between the new money Russells and everyone else.

They all have enormous houses and expensive attire. But there is a strict social code here, with which Fellowes is obsessed. I lost count of the times people namechecked “Mrs Astor” in breathless tones.

The show looks expensive, and if the exterior shots appear a little fake that is deliberate: this was Fifth Avenue in its earliest days, when shiny new houses were springing up as a showcase for conspicuous wealth.

The period will be familiar to anyone who knows their Henry James or Edith Wharton, and members of the cast — Nixon in particular — speak studiedly in the way that actors do in screen adaptations of those authors.

Will it be beloved, like Downton? No, because it lacks both that show’s warmth and humour. (Baranski is in a role closest to Dame Maggie Smith’s Dowager Countess, but gets none of those zinging one-liners.) Almost every character in Downton had likeable qualities, but that can be said of only a couple in The Gilded Age. 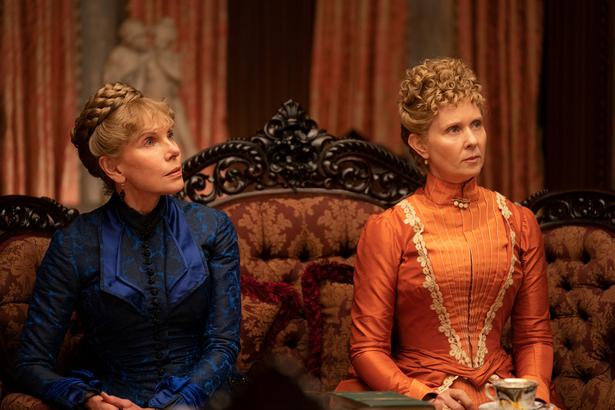 At its centre is Bertha, who is not so much social climbing as hacking up the face of New York high society with crampons and an axe. She is fixated on breaking into the top ranks, shameless in pursuit of her aim.

Perhaps this will make her a heroine to US viewers, but the British don’t like people who try too hard.

And yet, granted a sneak preview of future episodes, I found myself quite absorbed in Bertha’s mission. The Gilded Age is by no means radical — looks-wise, it could have been produced at any time during the past 40 years, and the depiction of a black woman (Denee Benton) being welcomed into the van Rhijn household while encountering barely a hint of racism is a cop-out. Thank goodness then for Bertha, whose intensity fires up every scene she’s in.

The subject matter could have lent itself to something spikier. But Fellowes specialises in comfort television; one of his great skills is marshalling people and plots into one coherent, satisfying whole. By that measure, this is his best show since Downton.

The Gilded Age is available to watch on Neon.

Television's bright star shares why she dares for darkness on screen