Kiwi pop sensation Benee is on her way to global sucess. Photo / Supplied

Seemingly out of nowhere Stella Bennett, better known as pop singer-sensation Benee, has skyrocketed to success. The 19-year-old’s breakout hit Soaked is sitting at more than 27 million streams on Spotify, she scooped up four awards at the latest New Zealand Music Awards and is about to perform a second time at Auckland’s Laneway Festival this weekend, after an energetic debut last year with only a handful of songs to her name.

READ: The Coolest Acts To Catch At Laneway Festival

“I had absolutely no idea that I was going to be a musician,” says Benee. “If I told myself a few years ago, I would flip out. With Spotify, you can see where your listeners are from and there are countries that I’ve never even heard of. I was like, ‘What the actual heck is going on?’.”

The Grey Lynn-raised singer has nurtured a skill in music from a young age; playing guitar and saxophone, singing in her school choir and tinkering away making beats on music software system Garage Band. So it is baffling that, with her effortless husky-toned voice, she hadn’t considered a career in music.

Fresh out of high school and two weeks into a communications degree at AUT, Benee realised she was on the wrong path, a time she refers to as a “quarter-life crisis”. Her break came after her four tracks on music sharing platform SoundCloud caught the attention of esteemed Kiwi producer Josh Fountain, member of Auckland band Leisure and the producer for local artists such as Mitch James, Theia, and Matthew Young.

READ: The Coolest Music Acts To Catch This Summer

“At that point, music felt like something I could give a solid shot,” recalls Benee. “If it failed I could go back to university.”

The arrival of Benee’s first EP, Fire on Marzz, followed just over half a year later.

“I was so lucky to have my first sessions with him,” says Benee. “We had a lot of demos that didn’t work out and kept experimenting. I usually brought in notes or lyrics and Josh worked away with the beat to turn it into this crazy thing.” 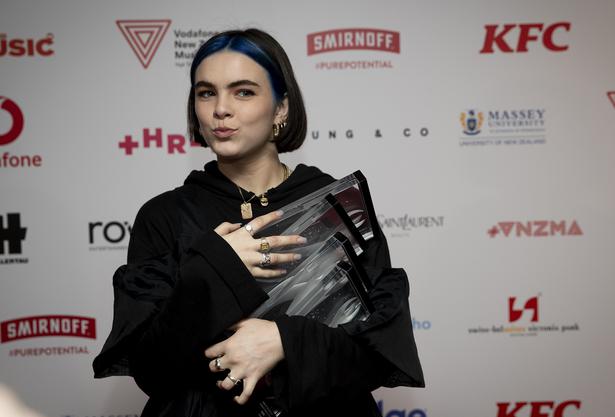 With the release of Soaked in September 2018, now a platinum single in New Zealand, the response was unprecedented. Soaked dominated local radio and was equally plugged by Australian radio stations Triple J (appearing at #58 in the Hottest 100) and the BBC Radio.

“We didn’t expect anything out of that song and it definitely opened up the doors for me and my music,” says Benee. “It’s been on this wild journey in the past year, translating it into Maori and performing at the You Are Us gig for Christchurch. There have been moments like that where I was overwhelmed with emotion and just cried feeling proud.”

She was named on prominent music website Complex as a best new artist of the month last October, has been featured in US magazine Billboard and performed a steady stream of shows across the UK, US and Europe.

Last August she went to LA to work with top local producers including Kenny Beats, Noah Breakfast and Jenna Andrews who have produced records for global pop stars including FKA Twigs, and Carly Rae Jepsen, ahead of her latest EP, Stella & Steve. The overseas stint was a valuable learning experience.

READ: Why Laneway's Snacks Blow Other Music Festival Food Stalls Out Of The Water

“I was a bit out of my comfort zone being so used to working with Josh in one studio,” admits Benee. “I had moments with other writers when I was like ‘I just want to write my own stuff!’.

“I love the idea of being honest with what I create,” she continues. “It’s the coolest thing when someone tells me how they related to my music.”
At the prospect of living overseas right now, Benee replies: “For now I want to stay at home for as long as I can. I think being away from New Zealand makes me appreciate it so much more.”

• Benee will perform at Laneway on January 27. Visit Lanewayfestival.com