An industry long dominated by men, successful women command headlines in the world of motorsport — but they shouldn’t be an exception. Someone with first-hand experience of navigating the sport is Tiffany Chittenden, who in 2007 was the first woman to with the British National Karting Championship.

Currently living in Christchurch — though work takes her to Auckland and, later this year, to the USA and Europe — she's managed to make the sport a full-time job. “I am very fortunate to make my sport my career,” Tiffany says. “Achieving success has been a struggle at times and often you are told or feel that you should quit racing and ‘get a proper job’ But I love racing and can’t think of anything better than to have made it my job also.”

Training as a coach while she competed as a driver, she is now head academy coach for KartSport NZ, is involved in Coaching Karting, and works for Downforce Auto Events & Training. “There isn’t a lot of downtime or time off but that’s why I am so lucky I love my job,” she says. “I will rarely be in the same place for more than a couple of weeks. This means I have seen a lot of the world, as well as New Zealand. I love driving in New Zealand as there are some amazing roads and drives.”

Tiffany grew up on racetracks. Both of her parents raced (her mother's family even owned a Formula One team in the 1960s) as did her siblings. “It was in the blood,” she tells Viva. At the age of 12 she joined them on the karting track, winning the Junior Championship in her first year, and racing in the United Kingdom and Europe. After some time racing cars, she returned to karts, and went on to compete at an international level — representing New Zealand three times at the World Finals and the United Kingdom once, and making headlines with her British National Karting Championship victory. 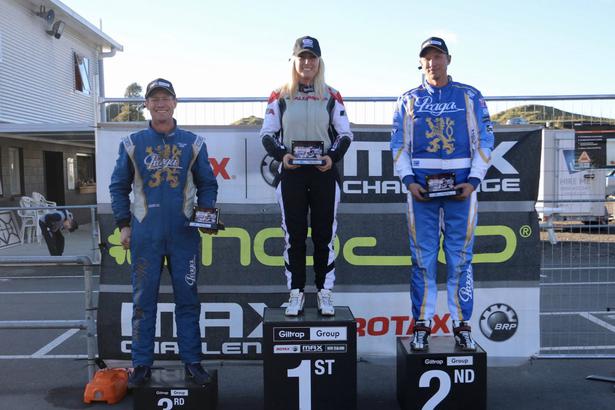 There have been speedbumps along the way. The pandemic was one, of course, but earlier in Tiffany’s career a serious accident injured her leg and caused permanent damage. “The doctors told me I wouldn’t walk again properly, let alone drive, and tried to take my driving license off me,” she reveals. “With a lot of support from my father and my race team, and a lot of physio, I actually started to drive a kart again (with special pedals) before I could walk again. I believe strongly that driving helped me walk again, whether it was muscle memory or just the fight in me not to give up.”

Women succeeding in the sport make the news as they remain a minority in the industry. Tiffany follows in the footsteps of people like New Zealand’s own Sybil Lupp a pioneering figure in motorsport. "Sybil Lupp has been a role model for all of us,” says Tiffany “She was racing as a Jaguar ambassador in the 1940s and 1950s and was the first female to own her own mechanics' garage in the country. She smashed conventions and defied expectations and has been inspirational across the generations.”

It’s this legacy that underpins Jaguar’s latest research. Competitive motorsport has long been dominated by men, much like the rest of the automotive category, and new data shows that it’s still an issue. In recently commissioned research by the luxury car brand — part of its new She Sets The Pace campaign to challenge conventions and gender stereotypes — the results revealed that sexist stereotypes endure. 55 per cent of New Zealanders believed that men drive better than women, 53 per cent think women are more interested in the style and colour of a car rather than performance, while 80 per cent had never watched women’s motorsport. 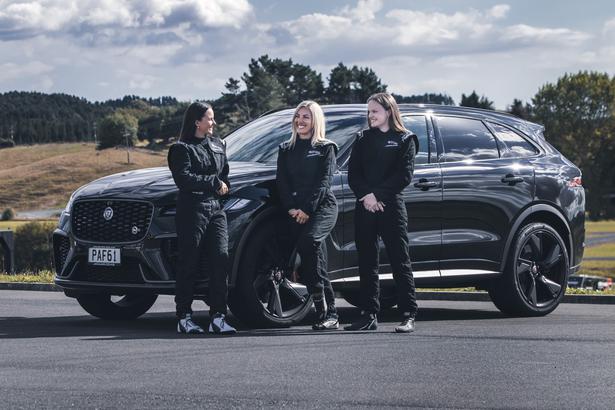 Reflecting on Jaguar’s study, Tiffany is frustrated. “An incredible 84 per cent of men still claim to be better drivers than women, which is ridiculous.” However, she’s not shocked by the research, and has experienced bias her whole career. “I am still surprised that we are still at this point in 2022,” Tiffany says. “I feel we should be further along with integrating more women into the sport and that’s why we need to encourage more young women to get into motorsport at an early age.”

These stereotypes are self-perpetuating. “It is a bit of a vicious circle,” Tiffany explains. “Without females in the sport, there won’t be females performing at the top of the sport, so then the perception is that females aren’t good at driving.” The attention and headlines women drivers experience as a novelty factor reveal the disparity. “Maybe we get more publicity when we do well, but the very fact we surprise or shock people by doing well shows that it is not balanced.”

“I don’t think I noticed [the gender bias] when I was younger,” she explains. “My Dad just treated me exactly the same as my brother when I was growing up and started racing, so I almost didn’t realise that I would be breaking any conventions.” He far Michael is one of her role models. “[He] has always been my biggest mentor. He was (and still is at 76) a great racer, but also sacrificed a lot to keep me in the sport and keep me confident and at the top of my game. I definitely owe all of my success to Dad.”

Success was something that first shone a light on the gender disparity in the sport for Tiffany. “I did notice when I started winning that people didn’t handle it the same as when a boy won,” she reveals. “Whether it was just surprise or anger, I did start to realise that things were different for me in some ways.”

READ: Why Surfing Has Been A Revelation For Cookbook & Wellbeing Author Eleanor Ozich

She wants to see the sport and wider motor industry diversify, and wishes gender bias and stereotypes weren’t even an issue. “I didn’t think of being the first woman to win,” she says of her history-making title. “I have just gone out to win and do the best job I can do and the rest is just a byproduct.”

However, Tiffany does understand the impact she can have shifting the industry. “I do know that if the future of the sport is going to change, then I need to help things change.” One thing Jaguar’s research did reveal was that there is an appetite for this. 74 per cent of New Zealanders think women are safer drivers, and 95 per cent thought there should be more women in motorsport. “There are very few role models for young girls in the sport and therefore fewer women getting into the sport. This is part of the reason I have partnered with Jaguar to help dispel the gender misconceptions Kiwis have about driving.”

Part of the partnership sees Tiffany join other successful figures in the industry, Amy Hudson and Rianna O’Meara-Hunt, on The Project to raise visibility around women in motorsport — part of the She Sets The Pace campaign.

Supporting the next generation of drivers, Tiffany coaches and manages young up-and-coming racing stars in Aotearoa — including the four current Junior NZ Champions. “I love working with them and helping them to perform at their best,” she says. “I also want to show them that motorsport can teach you a lot of lessons that will help you in everyday life. I think it is so beneficial for kids to have sport in their lives.”

It's incredibly rewarding work. “Teaching them everything I have learnt, it is almost as good as competing myself, I still feel the nerves, the excitement, and the thrill. I just hope that in the future I get to work with more girls so I can encourage them and teach them that there is no reason at all they can’t succeed in the sport.”

The tennis sensation’s fairy tale rise has now seen her become an ambassador for the luxury jeweller, and that's not where her ...