Shelf Assessment: What Do Bookshelves Reveal About You? The way you arrange your books could provide interesting insight into your personality. Picture / Getty Images

A lifestyle blogger called Laura Coleman, whose house was featured in Ideal Home magazine has been wishing she’d never revealed her tastes to the world. Ms Coleman has been vilified on social media, not because she has a stuffed bear in her front hall, or the world’s largest collection of framed butterflies, or a walk-in wardrobe that could accommodate six families.

No, Coleman’s crime is having arranged her books on her shelves, with their spines facing the wall, so as to keep the colour palette of the room a creamy, book page neutral.

The incident of the backward books, apparently a decorative trend, has evidently struck a nerve - and the haters are out in force.

This shelf hate seems to be driven by two impulses: one, outrage at disrespecting books and reducing them to shelf padding; and two, contempt for the sort of people whose homes are pristine, neutral environments, all about surface with nothing genuine behind the facade.

Poor Laura Coleman has found her shelves being held up as the epitome of style over substance and the shallowness of “lifestyle” trends. If you are the sort of person whose teeth are set on edge by the vogue for clean interior schemes lived in by people who insist their guests don’t wear bright colours (it happens) then book turning, for you, could be the last straw.

Still, singling out these shelves and their owner for death by social media does seem rather unfair. It’s true that unless Ms Coleman cunningly photographed all the books in situ, before reversing them, she would have a job locating a specific title. We can safely assume that these backward books were never intended to be read again. 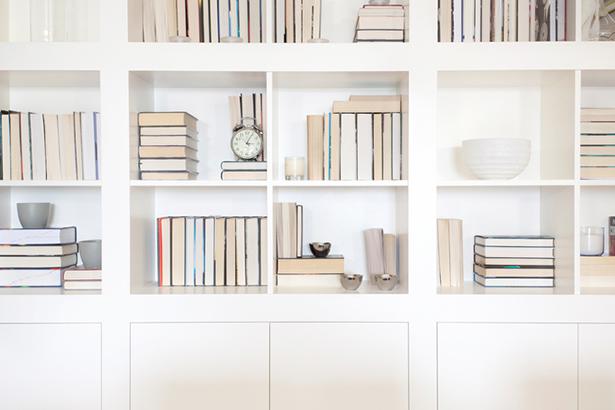 The incidence of the backward books on a bookshelf is on the rise, and it's a decorative trend that's causing a stir. Picture / Getty Images

But, in her defence, she says that these are all chick lit sorts of paperbacks which (my observation not hers!) you might otherwise leave on the train, or throw away to make way for others. Books with loud covers and titles like Maisie’s Fat Day Out, which don’t have much of a shelf life anyway, not to mention typically being bound in garish covers that clash with anyone’s colour scheme.

But, more to the point, who among us is not guilty of shelf rigging? Who doesn’t have a guilty book presentation habit? If the books on your shelves are slammed up there with no thought whatsoever for the impression they are going to give...then we would be very surprised indeed.

Come on. We’re all at it. Who hasn’t (on the night of someone we want to impress coming around) taken a quick look around the room, flinched, put away the amusing embroidered cushion and swapped How to Get a Rich Husband and Then Not Lift a Finger for Raymond Carver’s short stories or a Jonathan Franzen?

READ: How to Create an Unforgettable Table Setting

Bookshelf panic is like wardrobe panic: is this too flash, too flimsy, too dowdy and predictable? You don’t want the person you are trying to impress finding that the fridge is bare, or the bath is dirty, and you want to give a good bookshelf first impression.

That’s one aspect of shelf rigging, but most arranging tricks have zero to do with the books’ literary merit, or ease of access, and everything to do with how good they look. Some arrange their books according to size, some colour code, and some of us are concerned with giving maximum exposure to the prettier covers and (full disclosure) if the spines aren’t delivering the desired pop of colour, or a William Morris-esque print in lovely sherbet shades, then we may be tempted to place them in short piles, as on tables in a bookshop.

READ: 22 Books to Read This Summer

I’m always gutted if a book spine is black, or white, or worst of all, a bit gold, not the effect I’m looking for at all. In fact, I have been known to buy a book (Their Eyes Were Watching God by Zora Neale Hurston being a recent example) telling myself that I’ll get around to reading it one day (it’s a Virago Classic after all) but in the meantime its very appealing cover will brighten up the corner of that shelf that’s gone a bit Everyman monochrome. (Also Excellent Women by Barbara Pym, which just happens to have a fetching peach and air force blue “petal print” cover designed by the fashion designer Orla Kiely).

Just before Christmas, I bought the Penguin complete works of Jane Austen, again, entirely because of their decorative covers and, crucially spines. Shallow or reasonable? Somewhere between the two - I’d guess - and who cares either way.

Treating books as decorative objects is nothing new, let’s face it. Probably half the people who bought The River Cafe Cookbook Easy back in 2003 bought it not for the recipes but because it was like a mini bomb of modern art to display on your shelf and (which comes first is not clear) an object that instantly marked you out as someone in touch, surfing the zeitgeist.

Displaying the right books is no different, really, to buying that now ubiquitous cream and black Beni Ourain Berber rug, or a Nespresso machine. And hiding the wrong ones (which is partly what Ms Coleman was doing) is the equivalent of stripping granny’s old carved tallboy and (sacrilege) using it as a bathroom cabinet.

Shelf curating is getting more extreme as our living spaces get smaller. I can’t help fiddling the prettiest album covers to the front of the pile in the unlikely event that someone has listened to an LP and left an ugly cover facing the room.

I’m not overthinking it, but let’s just say it’s not often that Leo Sayer’s Greatest Hits makes it to the front and stays there.It’s the same with cooking ingredients, photographs, postcards, bits of junk, bottles: the only ones that get tidied up and put away are the ones that stick out like sore thumbs and offend our eyes.

Should books be exempt, above the requirement of having to look good? Absolutely, unless you want to furnish a room with them.

How to Have Fun on a Budget

20 ways to entertain yourself without a big spend