Shibuya Crossing is one of the most hectic scramble crossings in the world, with about 2500 people traversing it each time the signal changes. It’s also the meeting point for one of Airbnb’s Tokyo “Experiences”, which connect visitors with local hosts offering everything from traditional flower arranging classes, to soba noodle making, tours of kawaii shops in Harajuku or exploring historic temples. Each experience promises to immerse guests in the host’s unique worlds.

READ: Where To Shop In Tokyo: 12 Of The Best Places To Buy Clothes

Viva was offered the chance to explore the city’s central suburb Shibuya via a “Must-Do Walking Tour” with guides Shogo and Mayuka. The tour promised to touch on the traditional and modern aspects of the food, culture and history of the area and leave participants armed with dining and drinking recommendations. 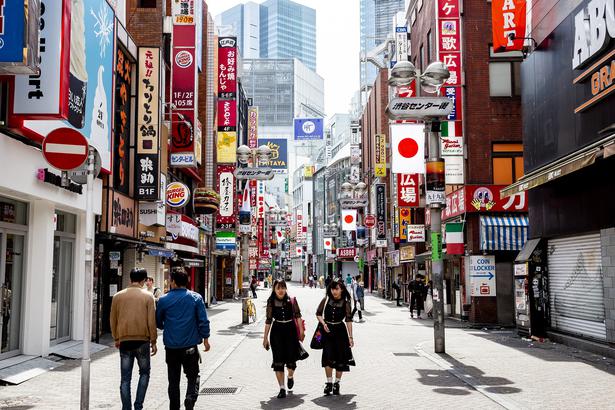 But first the tour group had to navigate that wild crossing, made all the more chaotic because Japan was celebrating Golden Week, its busiest holiday season. Shogo and Mayuka were leading the way to Nonbei Yokocho, or “Drunkard’s Alley”, a tiny alleyway of bars that have just a handful of seats inside, some of them with steep steps up to the top floor. Shogo explains that the word nonbei is slang for drunk and that these bars are notorious for people falling down the stairs after a long sesh on the beers or shochu.

Like the much bigger Golden Gai in Shinjuku, this alleyway dates back to the post-war era, and is lined with dive bars and izakayas that sit four or five people. Patrons sit elbow to elbow in these smoke-filled cupboards, and it looks fantastic, but the tour is on the move with only a moment to glimpse the fun inside. 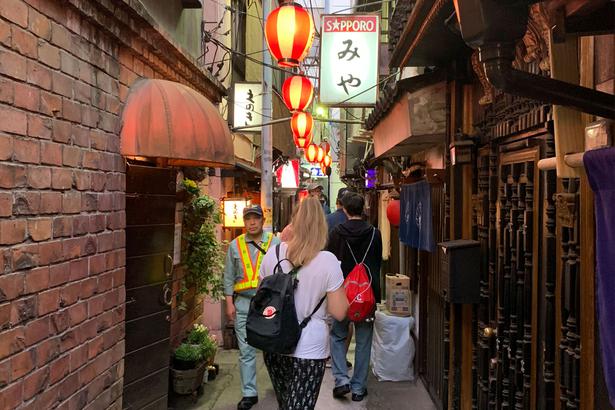 Another type of room designed for fun is provided by the city’s many karaoke bars, a Japanese staple and a popular pastime in Tokyo. Shibuya is packed with karaoke bars, including Karaoke Kan, made famous by Bill Murray and Scarlett Johansson in the movie Lost in Translation and which has long lines to get in. We pass by the multi-storey Big Echo, one of a large chain of karaoke bars where you can sing around a table in the restaurant-themed room, or pretend you’re recording an album in the live recording room.

Shogo and Mayuka lead us to a store nearby that rents karaoke outfits with everything from onesies to sequin cowboy hats and sailor suits. They explain that karaoke’s private rooms, which can be hired out for as little as $3 an hour, make the perfect place to sleep if you’ve partied too hard and missed the last train (usually 2am, with the first trains starting back up at 4am). 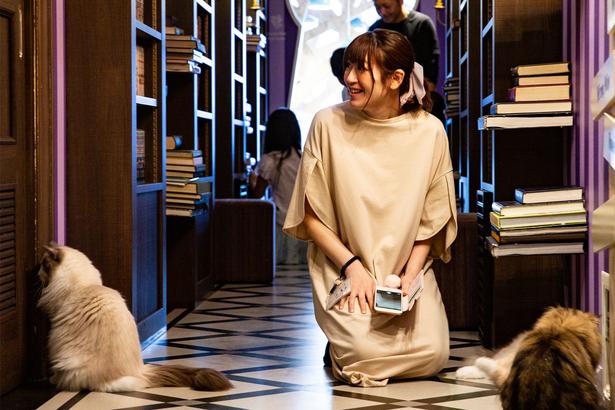 The next stop on the tour is a cat cafe, where you pay an entry fee to hang out and drink tea with a collection of cats (and sometimes dogs and monkeys), most of whom seem drugged on catnip. Cat cafes are a relatively new concept in New Zealand, but it’s a trend that quickly spread through Japan, since apartments are comparatively small and often don’t allow pets. There is a strange vibe at these cat cafes, with pure breeds like birmas, British shorthairs and cymrics adept at dodging pats and a feline smell mixed with cleaning chemicals in the air. 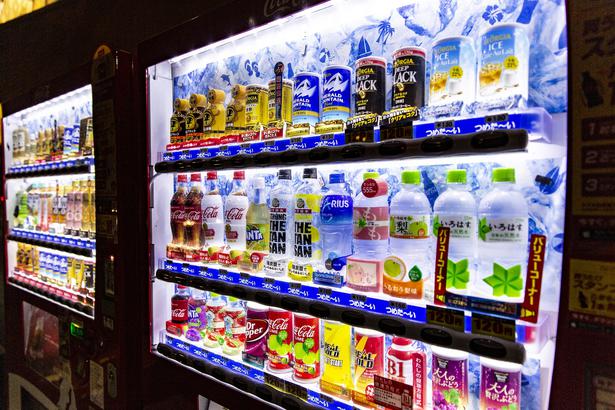 For a palate cleanser, we pause at one of the city’s vending machines, of which there are five million in Japan raking in $47 billion a year, which sell everything from cold and hot drinks, to bananas, stamps, cigarettes, pizza and even girl’s underwear (it’s a thing, Google it). These machines are everywhere in Shibuya and it’s scary to think of the amount of plastic they churn out daily. 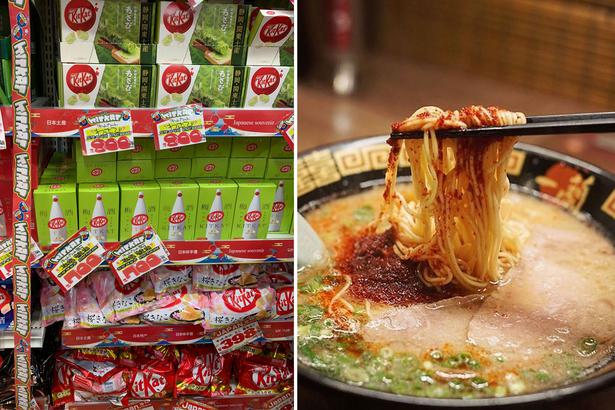 Just across the road is a Don Quijote store, another temple of consumerism with floors of beauty products, booze, toys and electronics, where we’re ushered single file through the crammed aisles on our way to the confectionery department. Shogo and Mayuka want to show us the range of 250 Kit Kats on offer, including flavours like wasabi, matcha and sake that are stockpiled by tourists. Shogo says Kit means “maybe” and kat means “win”, which roughly translates to “good fortune” and explains why these chocolate bars are so popular in Japanese culture.

For more satisfying snack options Shibuya is rife with great food. Genki Sushi takes Japanese efficiency to the next level with sushi ordered on a touch pad and delivered via a conveyor belt. Ichiran Ramen is a chain that attracts crowds of people but is well worth the wait. Kichitora Ramen is a tsukumen restaurant, meaning “dipping ramen”, where the noodles are served separately from the broth. Kurand Sake Market turns the all-you-can-eat concept on its head with all-you-can-drink sake for 3000 yen, with no time limits — you can even bring your own food. Any local will tell you that the best cheap eating is to be had around train stations. The Food Show is an incredible food market underneath Shibuya Station. This gourmet food mecca has it all — fresh fish and meat, baked goods, wine and confectionery and some of the most appealing prepared meals you’ll lay eyes on, including takoyaki, bento boxes and sushi. The tour group reluctantly climbs the stairs back up to Shibuya Square to say their farewells. If that’s just one hour’s worth of Shibuya discoveries, just imagine the possibilities.

• For more Airbnb Experiences for Tokyo, or any other city in the world, visit Airbnb.co.nz

Tokyo is synonymous with a self-assured approach to personal style that sets trends rather than follows them. Dan Ahwa takes a ...

Live Like A Local: Magazine Editor James Oliver In Tokyo

The New Order founder and editor James, who has called Tokyo home for 11 years, shares his top tips for this buzzing city