In a central London cinema, a group of adults old enough to know better watched the latest Pixar film Inside Out and they cried. At first they attempted to sob silently, but it soon became too much. The sound of weeping competed with the noise of rustling in handbags for spare tissues.

Rivers of mascara ran down the aisles. After the movie ended, a large queue formed in the ladies’ loos, where women tried to reapply faces that had crumpled under the sheer poignancy of the film. “Why do they always do this to us? Why?” wailed one mother. “I’ve only just got over the sight of Woody and Buzz almost being incinerated in Toy Story 3! Now this!”

Inside Out is the story of 11-year-old Riley, as told through the feelings in her head. Joy is the perky character voiced to perfection by Amy Poehler; Sadness is a bespectacled and dumpy girl forever chewing on her turtleneck. Disgust has a permanently arched eyebrow; Fear is highly strung, with eyes popping out of his head; Anger is a squat character dressed like Michael Douglas in Falling Down.

The premise is that these are the voices inside all of our heads, and it is their job to help Riley as she navigates through her childhood.

But when Riley’s parents force the family to move from Minnesota to the alien world of San Francisco, Joy and Sadness are forced to go on an adventure through the deepest recesses of Riley’s mind — her subconscious, her imagination and even the place where all her abstract thoughts are stored — in an attempt to save the long-term memories that are now threatened by the move.

Until Riley was uprooted, Joy had always been the star of the show; the predominant emotion in her head. But faced with such a momentous change, Sadness takes centre stage. As Joy desperately battles to make everything right in Riley’s head, she begins to learn that it just isn’t possible.

She needs to let Sadness take over. And so it is that the most unlikely of emotions saves the day, and makes everything better. The lesson we have learnt by the end is a powerful one all too unusual in the upbeat world of movies for children: it’s OK to be sad. Crucial, even. 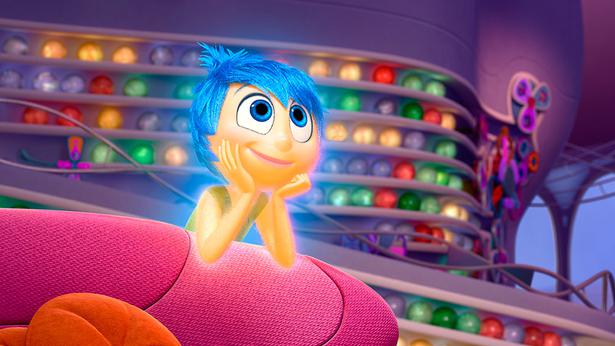 Joy, voiced by Amy Poehler, appears in a scene from Inside Out. Picture / Supplied.

Inside Out could be the most important children’s film since Bambi. This is, essentially, an animated film about mental health and it is almost unthinkable that it would have been made a decade ago (a film about a child’s brain? Have you actually lost the plot? Let’s go with something cutesy about superheroes or robots instead!)

But the very fact that the minds behind Toy Story and Finding Nemo have deemed it worthy of a movie shows you just how far we have come. I only wish it had been around when I was a child, when melancholy was seen as an emotion that needed to be banished at all costs (come to think of it, as an adult I still feel that way).

After the screening, I was lucky enough to be one of eight women invited to a small tea party hosted by Amy Poehler. The trailblazing comedian, actress, director and producer has been nominated for 15 Emmys; she has both won a Golden Globe and hosted the ceremony (three times), with her friend and fellow Saturday Night Live star Tina Fey.

Over cakes, sandwiches and champagne, she told us what a, well, joy it was to be in the film — only the second Pixar offering to have a female protagonist.

The 43-year-old Poehler is mother of two young sons and she joked about the general parental response to unhappiness in a child.

“It’s ‘please don’t cry! Be happy!’ Whereas this film says: Well, you don’t always have to be happy. And I like that it questions the importance we put on daughters to be good girls, in a way we just don’t with boys.”

The film has come in for some criticism, however, from people who think it has the potential to body-shame because Sadness is portrayed as lumpy and unfashionable while Joy is tall, thin and stylish.

“It’s a pity that the sad character is labelled as being fat, as that means that being fat is sad,” said British child psychotherapist Dilys Daws. “You could say it’s supporting the message of adverts where everybody looks slimmer than is natural, which then becomes thought of as the happy ideal. Children in general seem to think thinner is better.”

Meanwhile, child therapist Rachel Melville-Thomas said that “the Joy character is like Tinker Bell. She is relentlessly happy and as a child she is obviously the one you are drawn to. Sadness is portrayed as the party-pooper. It’s a bit simplistic.”

But I wonder if either of these experts had seen the film before being asked to comment. Because Inside Out is far from simplistic — at the end, fat, unfashionable Sadness comes through as the heroine, while Joy is left to concede the importance of the opposing emotion in Riley’s head. It is not the cool girl who wins; it is the uncool girl, with emo hair and glasses. Most importantly, the message comes across loudly that neither Joy nor Sadness could exist without the other.

Like all great animated films, Inside Out will leave its fans begging for a sequel. As Joy says in the closing line of the film, “Riley is now 13 years old. What could possibly go wrong?” So will Pixar go there and create a defining movie about puberty? Will Joy and Sadness be joined by several new characters known as Hormones? “Ooh, I’d love that,” says Poehler. “But I reckon I’d only have to do a day’s filming as Joy. She’ll definitely be a bit part in that film.”