In a world where the question ‘Who are you wearing?’ has become the new normal, we decided to ask the question ‘What are you reading?’ instead. In the first story of our regular #WIRT feature, we ask the designers behind Twenty-seven Names, Rachel Easting and Anjali Stewart, to review the books they have read recently.

Anjali: I just finished Modern Romance by Aziz Ansari and I really enjoyed it. He writes in such a comical way. I could hear his voice while reading, which was really funny. You can just imagine him shouting his jokes out on stage. In some places I think it was a little bit repetitive, but I thought it was very funny to hear about people’s use of text messages in the early stages of dating and the hilarious things that some guys seem to think are appropriate. I have just started The Luminaries by Eleanor Catton. At first I thought it was going to be really hard and wordy, and it's taken me quite a while to get into it, but 100 pages in and I am hooked. I'm really interested to see what happened on the Godspeed. 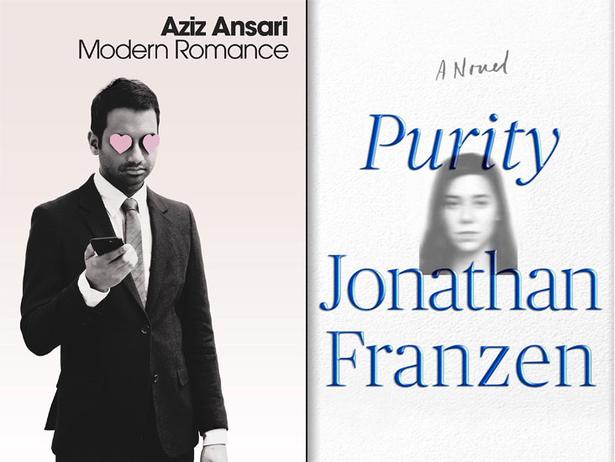 Modern Romance by Aziz Ansari and Purity by Jonathan Franzen.

Rachel: I am nearly finished Purity by Jonathan Franzen. I am loving it — which I knew I would. Freedom and The Corrections were both brilliant so I knew this would be a treat. I'm trying to read it slowly to draw out the enjoyment. One of the things I like so much about his writing is that it is such engaging reading, sentence by sentence. His tone is very funny and insightful, and even the most inane things or interactions between characters can be so amusing. I'm always wanting to read passages aloud to my partner Alex, even though he has no idea what's going on. I did actually give him a 15-minute synopsis the other night, to fill him in on everything going on because it was so crazy how the plot is so intertwined. Another thing I love about Franzen's novels is that he writes from the perspective of all the characters, so you get a chance to meet each one individually, grow to love them, and see how things are from their point of view. It's like getting special entry into the heads of the entire cast, instead of just seeing everything from one biased point of view.
I have two chapters to go, and I am yet to hear from Anabel ... I'm hoping it's next.

Book Club: How to be Both