Back in the distant, pre-paleopandemic era, a trip to New York was always a bit like the ice bucket challenge, sartorially at least.

Even at the height of one of those steaming, airless summers they always like to complain about, chic Manhattanites maintain a purposeful, unflustered air — and a lot of that comes down to their pared-back style. I always returned home feeling braced and determined to reduce my wardrobe by half.

It seemed to me that New Yorkers make a few pieces go a very long way simply by switching around their heels and accessories.

Has that approach changed through several lockdowns and what, by all accounts, was a mass exodus to the beaches of Long Island, the farms of New Jersey and the cabins of upstate New York, idylls from which many have yet to return?

Hell, no. If anything, New Yorkers have doubled down on the less is more mantra. Take Ralph Lauren’s recent runway show — his first in two years and the main reason I was there.

Old-school glamour was in abundant supply, and yet everyone exhaled that kind of effortless, pared-back look which sums up New York style at its best, even if it’s the antithesis of the way those four patron saints of the city (Carrie Bradshaw and co) dress. How do they do it? In two words: invisible grooming. Makeup, hair, nails . . . they’re all micromanaged so the chic New Yorker can look nonchalant and as if they’ve just nipped back from a beachy weekend in the Hamptons. In two more words: chic simplicity. Every single person — on the Ralph Lauren catwalk and the front row, including Anna Wintour — was in black or white. Except me. I didn’t get the memo, so I was in pale pink.

Weirdly, I didn’t feel awkward because at least it was a trouser suit, the other New York stand-by. That’s the first lesson. Have some fall-back tailoring you can dress up, down and wear for years.

Or as Ralph Lauren himself says: “I’ve always believed in timeless clothes that have no age attached to them — and, today, timeless style has to do with clothes defined by a kind of beautiful tailoring that has an ease, sophistication and modern glamour.”

Was there even a dress code memo for the show? The PR I asked was a bit hazy on the point. She thought perhaps not. It’s just that even now, when there’s so much colour on the catwalks and in the shops, New Yorkers have inordinate respect for monochrome.

A shimmery Jessica Chastain, one of Ralph’s guests of honour, in a beaded jumpsuit and tux, told me monochrome reminded her of old Hollywood. “There’s something incredibly special in the timeless elegance of wearing black. Not only does it give an effortless feel to any outfit, but it also gives me inner and outer confidence when I wear it.”

It’s one thing for a luminous, Oscar-winning, Titian-maned film star to cite the glories of black, but what about the rest of us who fear it may drain or age us? Then, lesson two is white is your friend, and with brands such as Me+Em intent on serving up smart wear (in every sense) that’s washable and crease-resistant, even a white maxi dress needn’t be off-puttingly high maintenance.

My American colleague Emily Cronin, who did time in New York before moving to London, thinks the appeal of an all-black wardrobe lies in its psychological force as much as its superficial qualities. “There’s a competence and no-nonsense subtext to black that I really love. You can really tell who the tourists are in New York. They’re the ones in colour, pattern, with this season’s trends all going on.”

New Yorkers do trends too — more than Parisians — but as Cronin says, “they pride themselves on their pin-sharp black suits, foot-long coffee cup ... and perfect manicures”.

In other words, there’s something tribal about wearing monochrome. It says you’re streamlined, disciplined, and know your own mind. And regardless of what they think, you don’t have to be a New Yorker to adopt it as your signature. While Cronin says a decade in the UK has seen her go native (florals, colour, pretty dresses), Avril Mair, the Scottish-born, London-based style director of Harper’s Bazaar and Elle UK, is known for her unfailingly black, white and khaki wardrobe.

Over the years she has honed her strategy. “Head-to-toe black is boring and unflattering, and there are different shades of black, so it isn’t true that it all goes together,” she says.

“Instead, I love the graphic simplicity of pairing black with white. It disrupts the eye so you don’t look like a solid block, and it’s impactful without any real effort. I think if the white part of an outfit is a simple T-shirt or shirt, it also allows you to wear more decadent fabrics — the kind of things you’d normally keep for evening — a lace shirt, or maybe feather-trimmed trousers. A focus on texture and embellishment keeps things interesting while a flash of white near the face is uplifting.”

Lesson three, keep an eye out for interesting fabrics (from herringbone to satin) and be ruthless about details. Sure, jewellery, tassels, fringes and feathers up the ante, but unless you’re meticulous about their quality and controlled about the amount of colour you’re piling on, it can all start to look like fancy dress.

Lesson four, monochrome doesn’t have to mean black and white. It could be navy and grey or camel and orange . . . anything that imposes an orderly boundary on the limitless and sometimes overwhelming choices out there.

And you can build in light and colour via a clear bright lipstick — and dark green or blue eyeliner, which won’t register as stagey but simply bring out the colour of your eyes. I find using powder and an eyeliner brush not just easier to apply than liquid versions, but the results are more subtle and flattering as you get older.

Lesson five — show some skin — stems from Mair’s assertion that “a restricted palette is such an easy way to look pulled together. It never feels too much, even if you’re mixing up print.”

She’s absolutely right. It also allows for a degree of cleavage and bared shoulders, a la Laetitia Casta, on the Ralph Lauren catwalk, without any danger of looking vulgar. An off-the-shoulder top or dress is an ageless, glamorous dress-up piece that looks good on everyone. 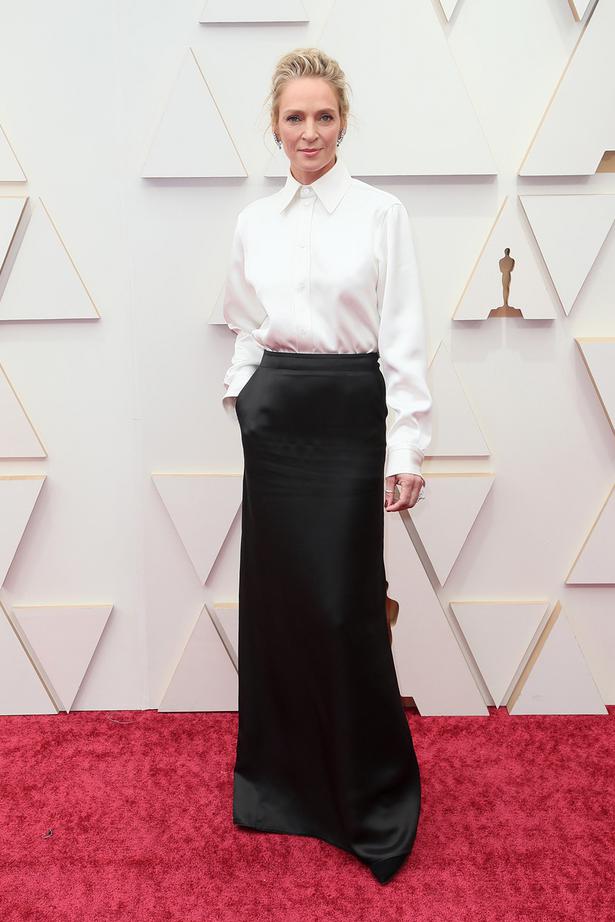 Keep patterns classic (lesson six), whether that’s a herringbone tweed or a Shetland knit. If you want a sublime example of this, Uma Thurman’s black satin Bottega Veneta fishtail skirt and white shirt at the Oscars was a salutary lesson in how the right kind of minimalism can hold its own in the face of what might, on paper, seem like superior displays of firepower.

Final lesson: just because something’s classed as a staple, it doesn’t mean you shouldn’t invest in the best version you can afford. Once you get past the basic-item-basic-price mindset, they become one of those magical wardrobe fixers you can wear anywhere while still looking and feeling like you.

A white shirt is best when it’s slightly oversized, and in a full-bodied fabric that holds its shape, or in a floppy, thick linen that drapes gracefully. Kowtow, Country Road and Cos are good sources.

So is Caitlin Crisp’s Merchant on Venice shirt, $350, and Laing’s silk shirt, $385, which will improve with wear and will never clog your wardrobe with their frivolity.

Take It Away, Tailoring: The Changing Role Of The Striking Silhouette

With more people working from the bedroom than the boardroom, Georgina Safe investigates tailoring's shifting place in a modern...

7 Stand-Out Looks To Layer-Up This Autumn

Lit Knits: 6 Local Designers Fashioning Some Of Our Most Beloved Autumn Woollens