From haute jeans to the cleavage comeback, Bethan Holt and Charlie Gowans-Eglinton share their takeaways from the front row Designer Denim
Hedi Slimane showed denim in 30 out of the 63 looks in his Celine collection — mostly these involved flared, stonewashed jeans with that wrinkling effect across the front of the hips, which I’ve always found odd. Is this a look you could achieve with a quick dash to Gap? Possibly, but be under no illusion — these will not just be any jeans, these will be ultra-flattering, precision-cut, perfect-rise jeans. And with one of his immaculate blazers, it’s a very sophisticated look.

For those of us sans snake hips, Slimane kindly created culottes and A-line midi skirts, some with a very bad taste patchwork pattern, which are bound to go from thrift shop bargain bin-worthy to the thing every street style girl is photographed in. Ripped, bleached and tie-dye denim also made an appearance at Givenchy and Dior, while Saint Laurent had cut-off knee-length denim shorts (approach with caution). So if you’re reading this wearing jeans, congratulations — you’ve got the SS20 look down pat already! — Bethan Holt 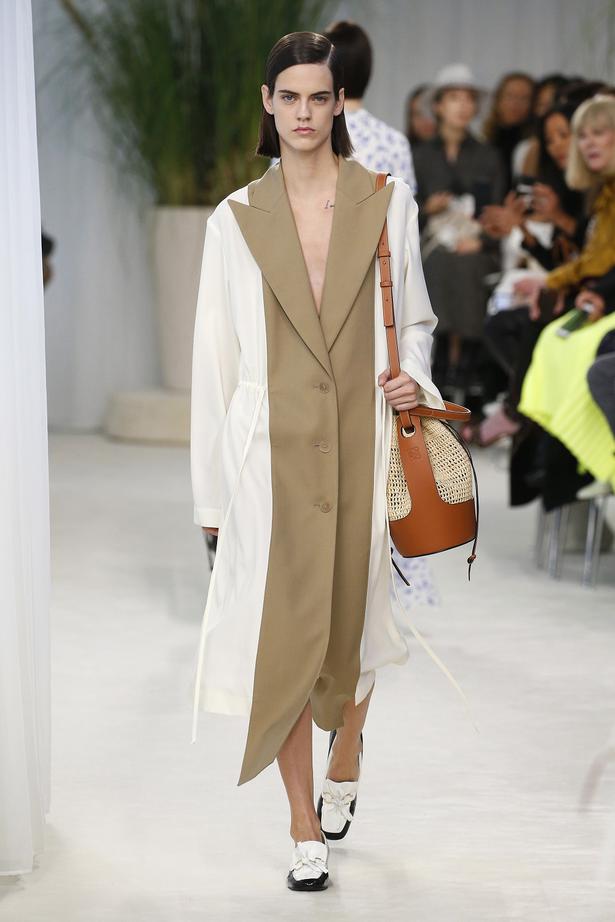 Trench dresses
The trench look is going nowhere — it’s been dug in for a few years now, and we love it so much that most editors spent their rainy Paris stint in one. And designers just keep coming up with new spins — after all, this might be one of those fabled items which you buy once and wear forever, but that doesn’t really take into account all the very slightly tweaked variations that are so tempting.

Enter Jonathan Anderson’s clever new trench/dress hybrid for Loewe which might not work for rainwear, but will be the perfect layering tool for next spring. There was a lot of crafty detailing in this collection — crochet, ribbons and ruffs — so this look was probably the most exquisitely simple and modern. You could wear the piece as an actual cover-up, maybe unbuttoned, do it the catwalk way and simply throw it on with loafers, or, if the weather’s awful, layer a trench over the top. See, endlessly useful. — Bethan Holt 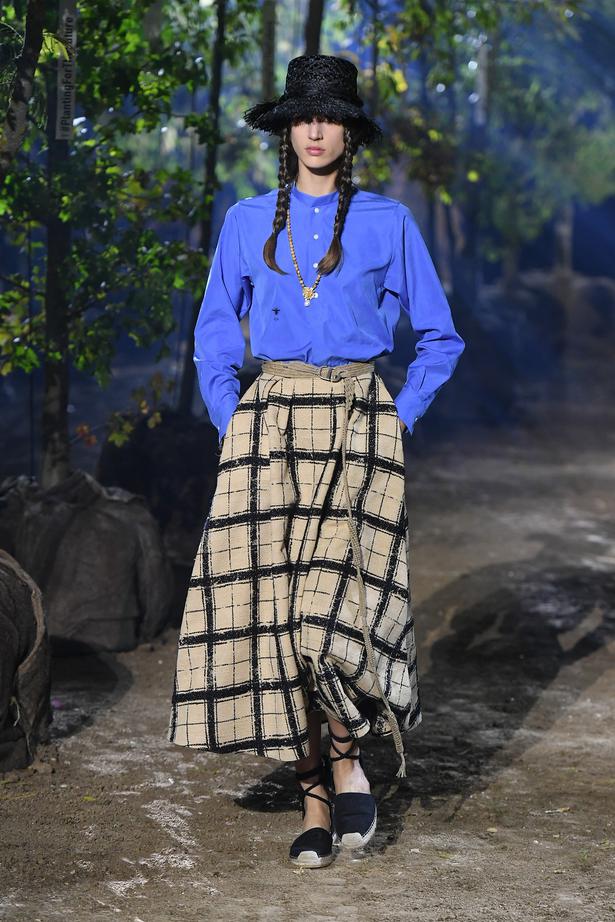 Shirts ‘n’ skirts
Fashion week now is less about introducing an entirely new concept and more about showing a subtle reimagining of familiar tropes. And so it is that it will be très au courant to wear a crisp, mannish shirt with a swooshy skirt next spring. I was lucky enough to visit the Dior atelier 24 hours before last week’s show and saw a room full of tailors running up those shirts in blue cotton, while next door the finishing touches were being put to skirts in raffia and linen — it all came together on the catwalk to create a chic gardener vibe that was quite Beatrix Potter, although the inspiration was actually Dior’s horticulturalist sister, Catherine. Stella McCartney offered the most wearable takes on shirt + skirt; her pointed collar button-up and A-line midaxi was sleekly polished while a white lace blouse and coordinating skirt gave a more laid-back option. — Bethan Holt 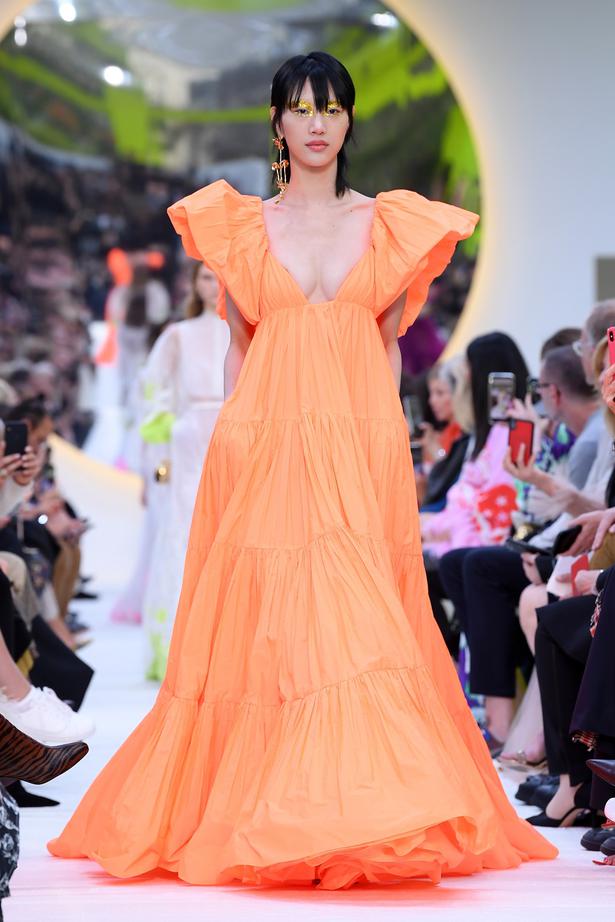 Cleavage
Yes, cleavage is back, but before you dust off your Wonderbra, there’s one crucial stipulation: this is about suggestion, not heaving Carry On bosoms. The thing with looking at low-cut dresses on the catwalk is that they never look too low-cut, as slight models have slight chests to match.

For those of us of fuller figure, avoid navel-seeking slashes: a not-too-wide V-neck, or an unbuttoned blouse (à la Celine — very French) worn with a bra that creates a natural shape, not a mountain range, and paired with loose fitting jeans and a blazer. On which note: silhouettes should be otherwise modest. See Chloé‘s barely buttoned dresses layered over trousers, and Valentino’s tiered, floor-sweeping dresses. To put it bluntly: breasts or legs, not both. — Charlie Gowans-Eglinton 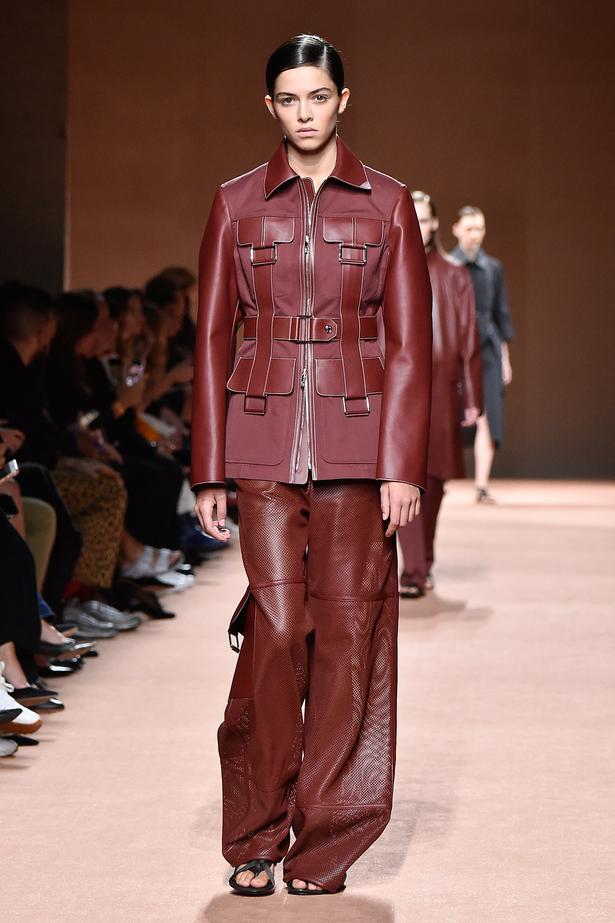 Leather — real or faux
If you want to invest in top-quality, wear-forever-and-then-bequeath-to-your-offspring leather goods, then Hermès is the one-stop shop for you. For spring, the heritage French house showed plush suedes and buttery leathers together, highlighting the textures of both; the deep tan or green car coats and utility jackets were particularly good. But if you prefer not to wear leather, then Nanushka had the answer. Slouchy camel trousers, a neat black blazer and skirt, and giant totes in milky-coffee colours all looked like leather, but were actually vegan-friendly faux. — Charlie Gowans-Eglinton 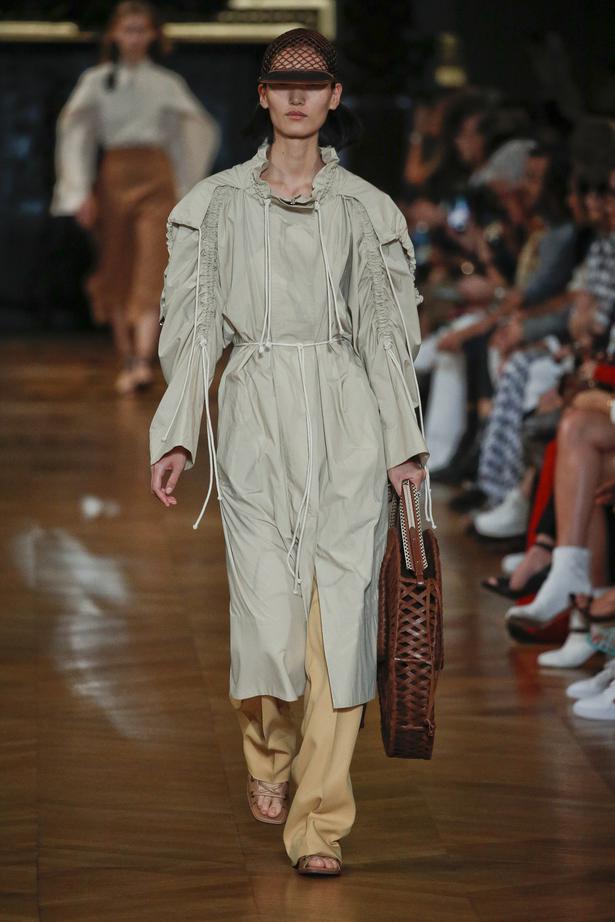 Lightweight coats
Summer coat: not an oxymoron, more a necessity in these climes. On the front row, trenches became a de facto uniform thanks to intermittent rain and mizzle: the best on the catwalk were Lacoste’s, in pistachio cotton or khaki leather. Elsewhere, Stella McCartney’s spearmint-green parachute take offered “haute cagoule” vibes for those Bond-Street-to-Ben-Nevis days, while A.P.C.‘s school uniform-ish collared swing raincoats, in tomato red, houndstooth and gingham, had a more tailored take that won’t swamp even the très petite. For dry but chilly summer days, Miu Miu offered trapeze coats and boxy cropped jackets in mint and toffee. — Charlie Gowans-Eglinton 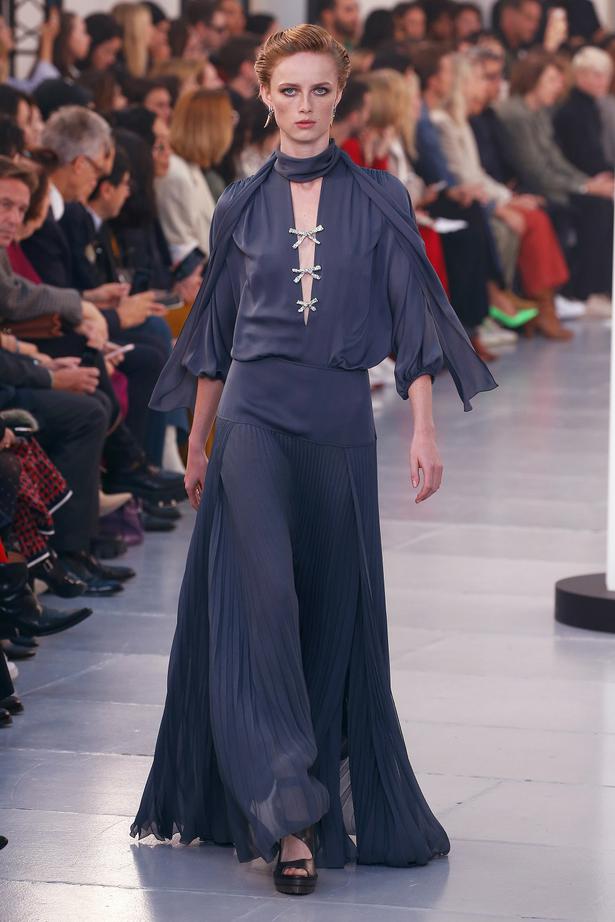 Long plus long
Modesty continues to look like the epitome of elegance, which is great for the global elite shopping these collections, many of whom conform to covered-up sartorial principles, and also wonderful for anyone who is prone to skipping leg waxes, gets a bit chilly or feels self-conscious about their upper arms. Chloé‘s Natacha Ramsay-Levi said she’d wanted to create a collection of pieces you wouldn’t want to throw away after six months, and who could possibly bear to part with her inky teal scarf blouse and pleated maxi skirt, which almost read as a languidly glamorous Thirties film star gown when worn together?

Elsewhere at Chloé, there were divine LSDs (long-sleeved dresses) in the form of flowing, featherweight balloon-sleeved maxis and Lady Di-ish diaphanous florals. Dries Van Noten (in partnership with legendary couturier Christian Lacroix) showed slouchy sweatshirts with floor-grazing tiered skirts and Altuzarra offered up shirtdresses that brushed both knuckles and ankles. The more fabric there is, the more there is to love. — Bethan Holt 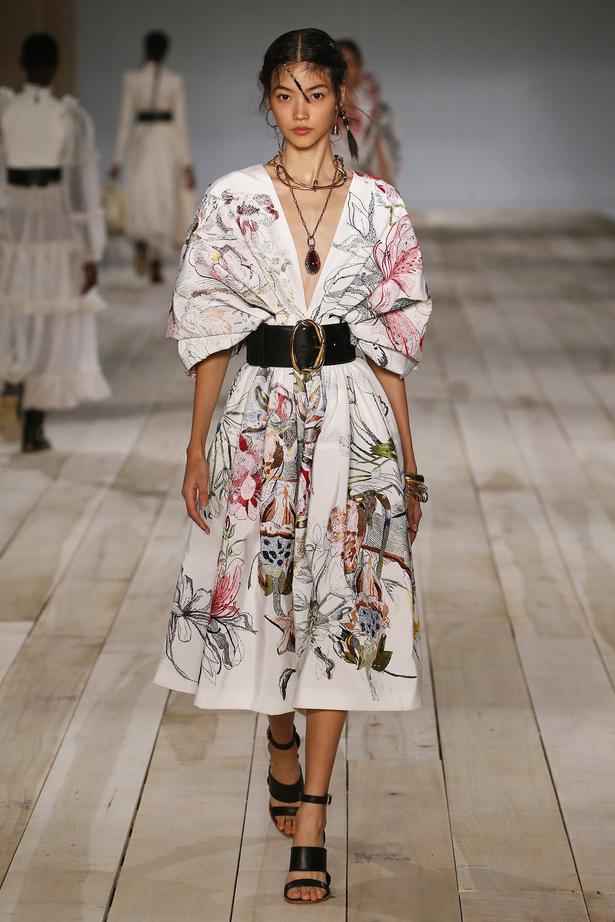 Blown-up flowers
Floral is the print to wear next spring — and last spring, and any spring as far back as any of us can remember. That doesn’t make florals bad, just a bit predictable — though in the right hands, they can still seem fresh and exciting. In Paris, those hands belonged to Sarah Burton and her team, as embroidery on some of the more spectacular of the show pieces was shared out between them, with even interns getting the chance to make their mark on these pieces of demi-couture. The resulting florals, supersized across white dresses and tailoring, each stitch like a pencil stroke, were unrecognisable from your common or garden: no wonder this is a print that eternally has legs — or rather, roots. — Charlie Gowans-Eglinton 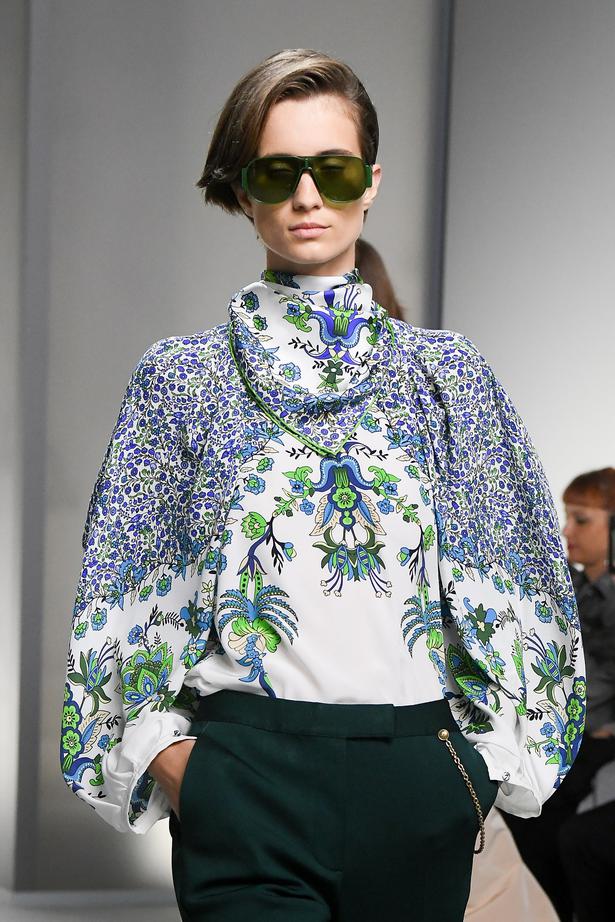 Power blouses
If this was the year of the dress, then 2020 is set to be all about the blouse. There were pussybows, Peter Pans and, at Stella McCartney, handkerchief-edged half-cape sleeved turbocharged versions. Current Elliott’s collaboration with The Vampire’s Wife (launching in November) spawned a bohemian/gothic floral iteration perfect for party dressing.

And at Givenchy, where Clare Waight Keller gave this sartorial sandwich-filling the attention it deserves, there were full D’Artagnan sleeves, covered buttons and proper weighty scarf-collars. Normally the blouse is layered, partly hidden under a jacket or jumper and competing for attention, but these were scene-stealing, standout pieces... though you still do have to wear trousers with them, obviously. — Charlie Gowans-Eglinton