Gucci's latest handbag is a sophisticated offering named after an unconventional woman. Dan Ahwa takes a closer look at the Gucci Zumi handbag

Zumi, who plays the saxophone in the Atlanta-based garage rock band Black Lips, takes a natural magpie approach to throwing on an outfit.

It’s an approach to individual style not unlike Alessandro’s own stylistic direction for Gucci - whimsical, charming and unapologetically excessive.

GALLERY: A Closer Look At The Gucci Zumi Bag

Debuting last October during Paris Fashion Week, when the label transplanted its usual show in Milan to Montmartre at the famous Le Palace night club, the Gucci Zumi bag appeared down the runway with its namesake, slung over her shoulder wearing a leather jacket and matching trousers over a black and gold bodysuit.

The contrast between Zumi’s rock n roll attitude with the bag’s startling ladylike shape re-enforced Alessandro’s unique and inclusive vision for the brand. “I constantly daydream about the Gucci show I walked in, wishing it hadn't already happened so I could do it again,” says Zumi upon the handbag’s debut.

“I was vibrating with an intense amount of anxiety and nervous excitement, which sort of felt like my heart, was pumping out glitter instead of blood, which was now twinkling through my veins. To be a participating element in this super intense, highly charged illuminated, magical moment! Like an eclipse, happening so fast.

The whole thing sort of feels like burning sparklers! They burn super hot, fast, and bright, beautiful, the illuminating everything, giving life! And then boom, it’s over. The energy from the now gone brilliant light still hums in the air.

Sometimes I play shows with my bands that can feel like that too, I don’t always get nervous when I play shows, but I like it when I do. If you can harness it, it's a useful energy boost.” 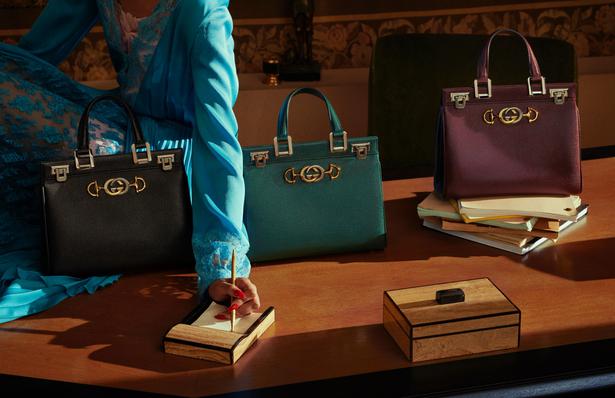 The handbag itself is far more restrained in its style. Unlike some of Gucci’s other handbag styles, Zumi is free of embellishment, monogram patterns and print -although a fun pop art inspired strawberry print makes a fun addition on some versions of the bag.

Combining two of the most historical House motifs, the Interlocking G and Horsebit hardware, a new small Zumi tote, inspired by a Gucci vintage bag from the 60s, was also presented during the spring/summer 2019 show and comes exclusively in crocodile and lizard skins.

The Zumi’s top-handle shape in grainy leather is offered in two different sizes, medium and small, and all of the bags in this style have a detachable and adjustable leather shoulder strap and a practical interior composed of a zipped compartment and a zipped pocket - perfect for anyone whose style sensibilities run the gamut from prim twin sets to denim and leather separates.

Since his debut at the house in 2015, Alessandro has transformed the House into one of the most inclusive luxury brand’s in the world, appealing to not only its traditional customer base but to a new generation of fans hankering after his more whimsical designs.

Bejewelled sneakers and graffiti versions of the classic Gucci monogram print are just some examples of design risks that have paid off. His ode to old school counterfeit goods with a unique collaboration featuring Harlem based haberdasher Dapper Dan proved to be a successful collaboration that opened up the brand o a new audience.

Alessandro’s ability to combine multiples references and creative people from all walks of life are what have made Gucci highly desired and lucrative - profits for the House doubled in 2018, with global revenue reaching approximately 8.3 billion Euros.

As for his latest muse, it’s in keeping with that successful formula of pushing the boundaries and offering a surprising mix of the traditional with the radical. “The first place I want to take Gucci Zumi is the Huntington Rose Garden tea room, and then Musso and Frank which happens to be the oldest restaurant in Los Angeles,” says Zumi.

“It’s an old haunt that was established back in 1919 it still brings out fascinating regular clients from the likes of Charlie Chaplin to even today with patrons like Kenneth Anger who is one of my heroes and also a fellow Gucci muse.

Supposedly he likes to go on Thursdays for the daily special which is the delicious chicken pot pie. You may find me there then lurking in the shadows amongst the beautiful tufted leather booths and wood paneling hopefully catching a glimpse of Kenneth when he is in his element.”