After a pit-stop return to Sydney on Friday, the Duke and Duchess of Sussex arrived in windy Wellington yesterday accompanied by the New Zealand contingent from the Invictus Games. Wearing tailored looks, Meghan selected a houndstooth print trench coat from Karen Walker. The Banks trench coat was the perfect choice as she descended from the plane, greeted by Prime Minister Jacinda Ardern.

Speaking to Viva, the designer is thrilled to see the Duchess wearing her designs for the fifth time during this current tour.

“This trench coat is one of our most beloved silhouettes” says Karen. “It first appeared, in classic tan trench coating, in one of our shows at London Fashion Week in 2004. Since then we’ve refreshed and revisited it many times and it continues to be a favourite. It’s ones of those silhouettes that works well in almost any situation, not least, stepping off a plane. Her Royal Highness looks very chic and we’re delighted that she’s chosen to wear Karen Walker once again.”

GALLERY: See Meghan's Most Stylish Moments During The Royal Tour

Ready for a windy arrival in Wellington, Meghan the coat layered over a black maternity dress from popular UK e-commerce store ASOS. This high/low mix is indicative of what we’ve come to love about Meghan’s choices so far, unafraid to mix high-end pieces with more affordable high-street separates. 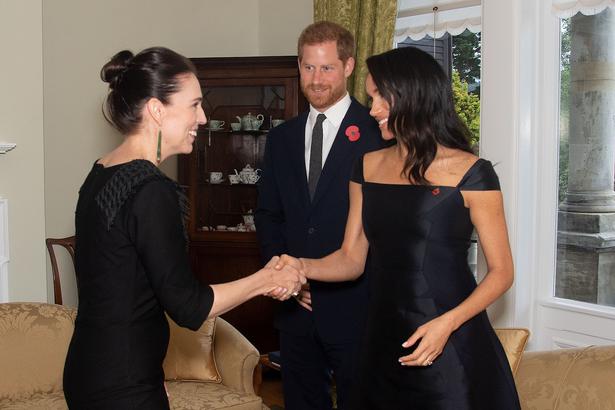 For the evening reception celebrating the 125 anniversary of women's suffrage, Meghan chose a black-capped sleeved dress by Uruguayan born, New York-based designer Gabriela Hearst. The dress is a modified version of the designer's silk wool 'Herve' dress, featuring an A-line silhouette. Her 'Tattoo' necklace was created by New Zealander Jessica McCormack (who is based in London) from a collection inspired by traditional spiral motifs found in Ta Moko. It's fitting she wore a colour associated with New Zealand as she gave a moving speech on feminism and the suffrage movement. Prince Harry selected a sharp navy dinner suit with a white shirt and wool tie.