Sharon Stone at the GQ Men of the Year awards in Berlin, 2019. Photo / Getty Images

Before you say anything, I know Sharon Stone has had her diva-esque moments over the years.

I know, too, that the leg-crossing thing in Basic Instinct is not, as proud thespian moments go, up there with Meryl’s crunch point in Sophie’s Choice, or Dame Judi’s anything. Flying into a tizzy because a female rapper released a song called Sharon Stoned, thereby attempting, in Stone’s words, to capitalise on her “extraordinary level of popularity and fame”, wasn’t her finest moment either.

The song debuted a year ago, but Chanel West Coast, the rapper in question, recently released a parodic (or was it reverential?) accompanying video, and that’s what seems to have hit a nerve with Stone, who later issued a writ against the rapper. It’s a rare misstep from an actress who generally adopts the strategy of never explaining and never complaining.

Mostly, la Shaz seems to have a sense of perspective. On stage at the German GQ Men of the Year awards in Berlin (at which she received the award for woman of the year), Stone stated that Paul Verhoeven, the director of that (in)famous leg-crossing — and uncrossing — scene, asked her to hand over her knickers before filming. Wow, 1992 seems like the dark ages, doesn’t it? Stone invited the audience to cross and uncross their legs with her. “Do you feel empowered? Maybe not,” she noted acerbically.

Intelligent, a campaigner for social justice, dog-lover and polymorphous — she’s also a producer, and sometime interior designer — she has become a source of both wit and wisdom. She also has fabulous hair, which isn’t to be underestimated. There are style lessons here for all of us.

A few geometric truths
Way back in the late Eighties — an appalling era, aesthetically speaking (no matter what Dame Joan Collins says) — Stone, with the ruthless logic of an architect, worked out the proportions and dimensions that suited her: chin(ish)-length hair; boat, V or lapelled necklines; medium-thick, arched eyebrows; classic pencil skirts and ball skirts. By 1992, which was still the Eighties to all intents and purposes, she had corralled her learnings into a look that was the only classy thing about Basic Instinct. She largely did this by ignoring most of the prevailing trends of the day and honing a roster of classics — but never to the point where they were immutable. Take trouser suits, a Stone staple for decades. Her most recent have been florals. The salient Stone lesson here is that she always looks at ease in her outfits, but also glamorous, and while her go-to at night might still be a sparkly dress, during the day it could be a luxury knit. 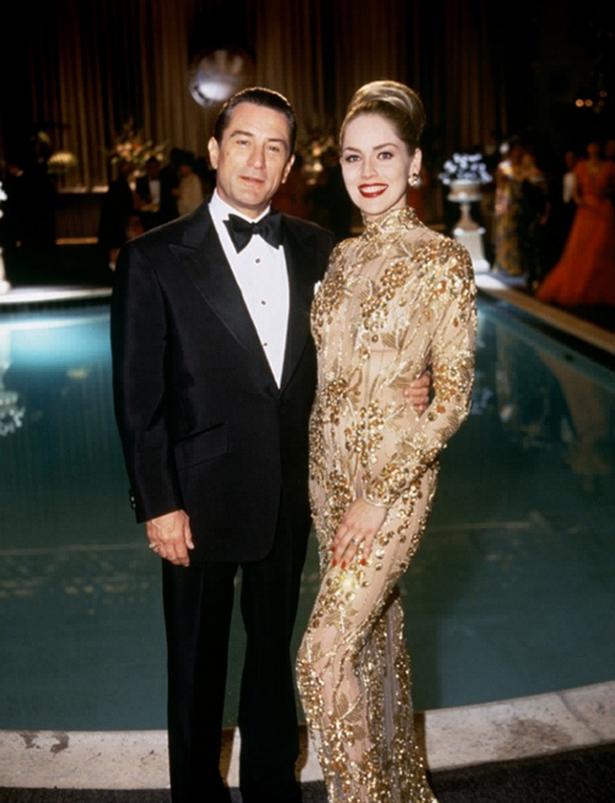 It’s all about the clavicles
Occasionally she’ll go back to basics, with a plunging dress or neckline. But mostly she’s what might be called assertively subtle. She loves a statement sweater neckline — raised, but not too severe. She loves a floppy, funnel or side-zipped collar that isn’t too tight to be flipped down — anything that shows a glimpse of shoulder, the part of the body least susceptible to ageing. Search stores like Cos and Zara for your own floppy turtleneck — perfect for framing the jawline.

The same old. But different
The clothes and colours she wears today — tailored trousers, both skinny and wider; silky blouses; drapey jackets; pearl-greys, creams, soft but strong jewel tones — are the same(ish) as those she wore 30 years ago. Note the “ish”. Everything is in that ish. Shapes, length and even diameters have been tweaked. Fabrics especially. She’s always loved tailoring, but nowadays she might try it in a glossy leather, or playful pattern. Textures are soft, fluffy or sheeny, the better to bounce light on to her skin. The hair is less puffy, the red lipstick more sheer, the cheekbone blush more blended, the shoes updated (nothing influences the tempo, tone and topicality of an outfit more effectively than shoes). Don’t be held to ransom by your past
Just because you’ve done things a certain way for the past 30 years, or become known for a particular signature, you don’t have to be imprisoned by it. Stone had her share of Golden Razzie nominations for worst actress, but was nominated for an Oscar for Casino in 1996. According to a recent issue of Architectural Digest, she now co-runs an interiors consultancy. The idea of telling Stone you don’t like the Farrow & Ball she chose for the kitchen may make you quake, but that’s not the point. She’s best known for being Sharon Stone (1.7 million Instagram followers and counting), rather than a specific trade. Take a leaf from Stone and don’t let your job, town or income define you. When it comes to style and appearance, it’s never too late to change. Always hated your teeth? This is the moment to blow some budget on a new smile. Suspect your hair’s holding you back? Sack the hairstylist and find one worthy of you, even if it means getting on a train and travelling. Don’t be afraid to approach strangers whose style you admire and ask them for the appropriate addresses. They’ll always be flattered, and you could learn something useful. But don’t trash your past either. Every mistake, every detour taught you something.

Keep it simple
Buttery blonde bob, glowy skin with a biscuit tan, pristine, scrupulously flossed teeth... these are not exactly ground-breaking beauty ideas, which is why they work. No zany experiments for Stone. “When I have to go to something, I’ll run upstairs, throw on some lipstick and sunglasses and [my friends] are like, ‘Oh you just turned into Sharon Stone’,” she says. She claimed in one Instagram post only to use one product in her regular skin care routine — an Avon moisturiser, morning and night. She’s figured out that it’s enough work keeping hair and body in top working order, without complicating things with fussy extras. She loves a good highlighting powder with plenty of light-reflecting particles.

If you’ve got it, nurture that muscle memory
Not everyone can get away with wearing as little material as Stone did at the aforementioned GQ awards, regardless of their age. But Stone has a well-honed, self-critical eye, and she’s clearly passed her own test. Nor does she take her natural assets for granted — she works out every day. She also knows that rules about appropriate dressing change as part of the social flux. It’s never a bad idea to question the countless little shibboleths that could be holding you back from enjoying your clothes, or looking relevant. Static fashion is a form of stasis, and how we choose to dress is part of the way we communicate with the world. At the very least, challenge yourself to take one step out of your style comfort zone every year. Wear the dress — don’t let it wear you
While other actresses fall over themselves to work with edgy designers in the belief that it will confer an aura of indie-film quirkiness (Jennifer Lawrence literally fell over, twice, defeated by the unwieldy trains of her Raf Simons for Dior ballgowns), Stone knows there’s no such thing as “intellectual” clothes. Her biggest style moments came not from wearing outlandish statements but timeless favourites — a shirt, a satin skirt. Her turn at the Oscars in a button-down cotton shirt from the Gap and a Vera Wang lilac satin ball skirt was an unprecedented marriage of high-low fashion, and all mediated by Stone herself, sans stylist. It resonated so powerfully not because it looked avant-garde — it didn’t — but because it had something to say to millions of women about pragmatic, relatable glamour. That seemed far more radical than anything the self-styled “conceptual fashion” set was doing.

Soft serenity on the surface, granite Stone below
She may be all about soft, pearly colours and shimmery, luxurious textures on the surface, but you don’t get to look this way in your sixties without hard work and discipline. She avoids gluten, alcohol and junk food and goes to the gym most days. “Just don’t make it joyless” is her mantra. “Do what you like to do, but do it every day. I love to dance and I dance hard,” she says. Stone has also always looked good in gym-inspired gear — the kind that looks good all day, even when you’re mooching about in your Hollywood villa, à la Ernest Leoty. Pricey, but in California, you can wear those bralets and leggings with a cashmere boyfriend cardi all day long.