"I don’t miss the travel, that’s for sure,” Alexa Chung tells me from her cosy open-plan kitchen (part industrial-lite brick walls, part #cottagecore) in Dalston, east London. “I’ve been imagining going back to real life and it seems unfathomable.”

We’re talking, inevitably, over Zoom and for someone who says she couldn’t sleep for weeks until she stopped watching the news, she’s disconcertingly radiant. Later I have to check how old she is – 36. That make-up we are here to discuss must be extraordinary.

To recap, pre-lockdown, real life for Alexa involved whizzing to and from New York, where she used to live, as well as hopping on and off planes to work on various fashion projects. There is her own eponymous fashion line, with which she is properly, fully involved – “like every day, designing – even more so now that I’ve got a bit more time” – and there’s Next in Fashion, the Netflix talent show for designers which, back in January, she co-hosted with Tan France, the silvery-haired schnauzer-in-human-form breakout star of Queer Eye.

READ: The Message Behind The Duchess of Cambridge's Lockdown Style Formula

There’s also her new ambassadorship for Code8, a niche, British make-up brand whose peachy blusher (which she also uses on her lids) and Universal Lip Glazé (it’s a non-sticky orange gloss that seems to suit everyone), she tells me, are responsible for her dewy appearance. Her endometriosis (a painful condition that affects the ovaries and Fallopian tubes) means she gets a recurring spot on her chin but, she says, Code8’s Radiate Beauty Balm, a tinted moisturiser and then some, provides the necessary cover and gleam even though it’s light. 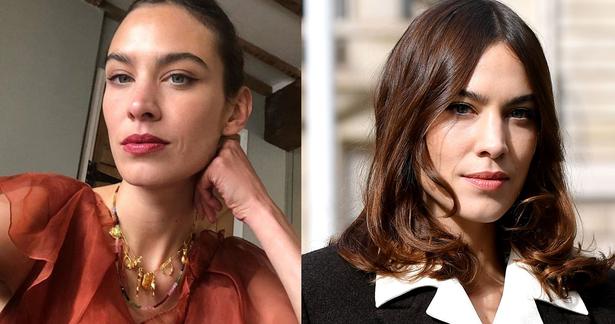 BEAUTY ICON: Not only a fashion favourite, Alexa's beauty approach is both glamurous and natural. Photos / @alexachung, Getty Images.

There was a time when Alexa seemed to endorse a gazillion brands. Often, they’d co-opted her image without her necessarily reaping financial benefits (apart from the attics full of clothes she now has). These days, she’s older and choosier.

#Ad Thrilled to announce I’m the new beauty ambassador for the brilliant @code8beauty. As someone who takes a fuss-free approach to my daily beauty routine, it’s a pleasure to work alongside a brand who believes in foolproof and easy to use products. This fool is most pleased. #beautydecoded #code8beauty

However, excellent as Code8’s products are (the custom-blended lipsticks have featured previously on these pages), I feel I should point out her other devastatingly good beauty essential. At the start of lockdown, she invested in a big fat tripod ring light from Amazon, which now lives behind her camera, flooding the Alexa cheekbones with glowy light. After our conversation, I immediately order a £24 tabletop version. It’s a game-changer.

What she isn’t is predictable. While millions have happily expanded into elasticated joggers recently, her go-to items have been: a floor-length peachy gown (“when you don’t go out much you don’t have to think about the practicalities so much”), a navy cardigan from her own line, the broderie anglaise blouse she has on today, a pair of moss-green ballet shoes from Ballet Beautiful (her normal go-to exercise routine, although during lockdown she has been doing Zoom workouts, endless squats and Dyna Bands, orchestrated by her friend Pixi Geldof) and some safari shorts, which she had to have after rewatching Out of Africa.

READ: How Alexa Chung Made Style her Business

“Ordering a roasting tin from John Lewis, that was another achievement,” she says. I’m picturing her doing a particularly stylish domestic goddess turn around her boyfriend Orson Fry of the band Soundtown, or as the tabloids prefer to call him, “Alexa’s toyboy” (he’s 24), as she serves up the traditional roasts and banana breads she’s become obsessed with making. But she has eschewed keeping a diary. “It would be so boring to read.”

“It has got a bit housewife-y dream, “ she says of her current style. “I’ve been very influenced by film during lockdown. I really had to hunt down those safari shorts. No one was doing them, but I thought some label has to have designed them by mistake. And Maxmara was the one”. This is a somewhat different interpretation of Out of Africa from Melania Trump’s more literal take on a trip to, yes, Africa, during which she wore an Alexa Chung suit. Alexa doesn’t roll her eyes, as some designers might at being associated with the First Lady. “Good on her for really loving fashion,” she says.

WATCH: Alexa Chung Learns How To Do A Ballet Workout

Chung is very thin and very beautiful and most of us couldn’t pull off most of what she wears. But the illusion that we just might look like she does in an old Barbour, or a second-hand schoolboy blazer is enough to keep 3.9 million of her Instagram followers hooked, even, or perhaps especially, during lockdown. Unlike many celebrities, chastened by the howls of disgust that greeted their early cack-handed social media dialogues (take Sam Smith or Ellen DeGeneres declaiming their sorrow at being incarcerated in their sprawling mansions for instance), Chung hasn’t resorted to posting twee homilies, relying instead on her core brand values of humour and topicality. The closest she got to a winge was a picture of her in her newly tidied office entitled, “Chairman of the Bored”.

She genuinely loves what she calls “the performative side of dressing and making up”. Lockdown hasn’t changed that. “For me, clothes have always been about nostalgia, and that’s truer than ever now,” she says. “This has really tested the limits of who we’re dressing for.”

Opinion: Why It's Okay To Achieve Nothing During Lockdown

If you’re struggling to answer the question: ‘What did you do in lockdown’?, then join Janetta Mackay in deciding it’s time to ...