The new collection of apparel from Allbirds will debut with an innovative t-shirt. Photo / Supplied The San Francisco headquartered company, co-founded by former All White Tim Brown, is gearing up to launch a clothing line of T-shirts, jackets, jumpers and knitwear, to add to its growing footwear, socks and underwear business. It will initially launch its clothing line in New Zealand with a range of T-shirts.

Earlier this year, Allbirds completed a $100 million capital raise as part of its plans to launch into new product categories and expand its portfolio of 21 bricks-and-mortar stores.

It has spent the past two years working on material innovation for its apparel, including developing a yarn spun with chitosan, a fibre derived from crushed snow crab shells found in Newfoundland in Canada.
Its TrinoXO™ Tee T-shirts are said to require fewer washes and have a 20 per cent lower carbon footprint compared a standard polyester T-shirt.

Talking to the Herald exclusively, Brown said the expansion into mainstream apparel meant the company had brought its R&D team over from its footwear division and hired additional staff to lead the clothing design.

"Making shoes and making apparel is completely different; there's design talent, production talent, new supply chains; and we were not just looking for a new factory, we're looking for the ability to meet our ethical and environmental standards, which are quite rigorous, and that takes a lot of time," Brown told the Herald.

Allbirds focuses on carbon as metric to judge its success and is on a mission to create footwear and apparel with the lowest-possible carbon output. It spends a large chunk of its time developing sustainable fibres that can be utilised throughout the textile industry. The TrinoXO™ Tee has been developed with a yarn spun with chitosan, a fibre derived from crushed snow crab shells. Photo / Supplied

The company found its feet in 2016 using New Zealand merino wool and sugar cane to make its shoes, and sold its one-millionth pair of sneakers just 14 months after launch.

Initially, Brown said he questioned whether the world "needed another T-shirt" but said Allbirds' innovative material that it had trademarked was the answer to that.

"We're not moving away from footwear - it's still the vast majority of our business, we've still got a lot to learn there, but we're developing pretty deep expertise in that space - but with the addition of socks and underwear, we started to imagine the possibilities of taking the brand further."

Brown said Allbirds would continue to invest in infrastructure to build a sustainable supply chain that enabled it to make products with net-zero or close to zero carbon as possible.

The company launched its first running shoe during the middle of the Covid-19 pandemic, and while the outbreak had an adverse effect on the business, Brown said it was in a strong financial position and was continuing with its plans to open more stores.

READ: The Year Of Innovation & Influence For Billion-Dollar Brand Allbirds

"The business has been resilient and I think we've had the good fortune of being a vertically-integrated brand with a vast majority of our sales in a digital e-commerce context. We were luckier than many going into it and we've seen the business weather the storm really well."

Allbirds uses certified carbon offsets in the short term to pay to make the business, every part of the supply chain, and every employee's trip to work, zero-carbon.
The company has essentially imposed a tax on itself for carbon it emits to drive down its footprint. It also incentivises its executives - through bonuses - that find new ways to reduce the firm's carbon footprint and more efficient ways to make the products.

"Hopefully others will join us in this idea of transparency and sharing information and our materials will become the new normal so we can tackle climate change with greater speed."

READ: All The Highlights From The Club Viva x Allbirds Event

'Business needs to do better'

Sustainability is a word that gets thrown around a lot, Brown says.

He believes the private sector is not doing enough to combat climate change - or to operate as a sustainable enterprise.

"We've got to get carbon emissions under control, and one of the beauties in this very dark time of Covid is we've seen a global community rise up and tackle this problem ... It gives you a little bit of hope because the same level of collaboration and partnership and urgency is going to be required to tackle climate change," Brown said. 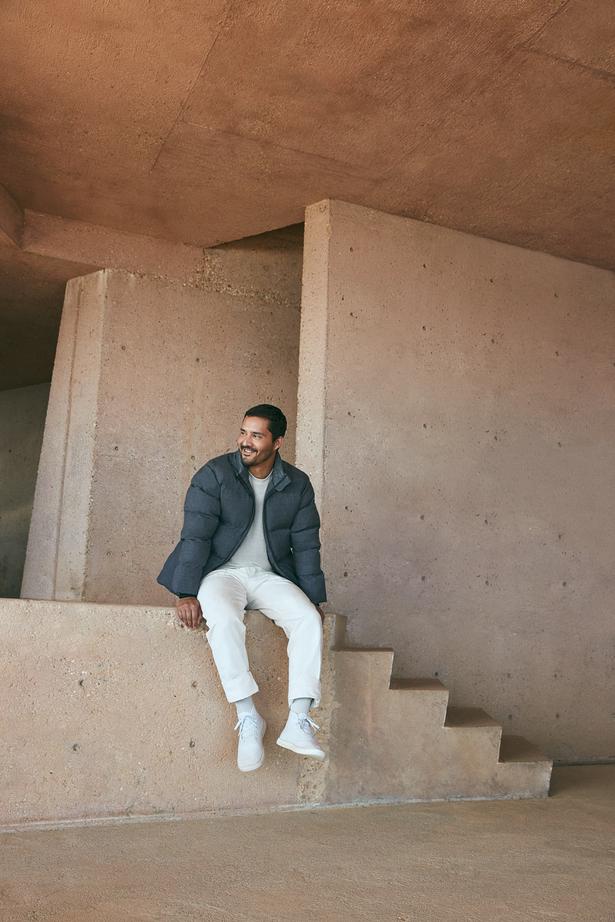 A puffer jacket is on the radar from Allbirds' new apparel line. Photo / Supplied

"Every business can and should be measuring their carbon footprint, using offsets as a short-term measure and then innovating to drive down that number down. Businesses that prepare that now are going to win in the long run.

READ: Has Tackling The Pandemic Meant Dropping The Ball On Plastic Pollution?

"This problem is so urgent, and while it's fantastic to see the business roundtable come together and redefine the idea of stakeholder capitalism, and many businesses and countries much bigger than ours make meaningful and important pledges for 2040 or 2050, what can we do right now?"

Brown said he hoped that other businesses followed Allbirds' lead in its race to drive down carbon emissions and develop sustainable materials and manufacturing processes.

"We're disclosing our emissions and they're greater than zero and therefore that's not good enough, so we've got to work harder. And I would hope that other businesses see this and are encouraged to understand and share it.

"In the same way that calories aren't the whole answer to being healthy and well, they are a data point that helps consumers make healthier decisions. Hopefully our carbon number initiative will do the same."

In May, Allbirds teamed up with Adidas, the world's second-largest sportswear manufacturer, to reduce 700 metric tons of carbon dioxide emitted by the footwear industry by innovating their manufacturing processes and exploring new technologies and renewable materials.

The pair have planned to develop a sports performance shoe with the lowest-ever carbon footprint.

The sportswear behemoth and the environmentally-minded start-up plan to develop a sport performance shoe with the lowest ever c...