Meet The Footballer Behind Allbirds, The Billion-Dollar Footwear Brand

Leonardo DiCaprio may be an investor in $2 billion woollen shoe company Allbirds, but he isn't on first-name terms yet with the company's New Zealand co-founder.

Tim Brown, the former All Whites captain who is now co-chief executive of San Francisco-based Allbirds, says DiCaprio stumbled across the company himself.

"I wouldn't say he's a friend, that might be overplaying it," says Brown, laughing.

"He's one of the pre-eminent environmental spokespeople and he found the brand rather organically ... through one of his cousins, randomly enough, and he has become an investor and backed us, which has been pretty neat."

Though the size of DiCaprio's investment isn't known, it hasn't gone unnoticed. The star made his backing public knowledge when he told his 18.9 million Twitter followers.

"[DiCaprio] is selective in the companies he backs so it was pretty cool to be able to get that across the line," Brown says.

"Hopefully, we can continue to use him to help tell [our] story."

At $2b, Allbirds' value has been assessed at twice that of space powerhouse Rocket Lab and way more than merino clothing company Icebreaker, which was valued at $288m when it sold in April. That valuation follows Allbirds' announcement last month that it had raised US$50m ($72.5m), a price which would value the entire company at US$1.4b ($2.03b).

Brown dreamed up the idea behind Allbirds in Wellington in 2009, when he was playing professional football for the Wellington Phoenix.

"This business was born as a curiosity project ... and was really a reaction to the free shoes I used to get as an athlete — from one of the major sportswear companies that shall not be named — in the belief it was very hard to find simple sneakers," the 37-year-old says.

Brown harboured the idea of a simple shoe for a long time before partnering with San Francisco local, long-time friend and Allbirds co-founder Joey Zwillinger in 2015.

The pair had met through their wives, who were room-mates in college. Together, they set out to create a simple trainer that wouldn't harm the environment.

"This was a bad idea for a long time before it was a good one," Brown laughs.

Allbirds launched in March 2016 and in its first 14 months, the business sold only one pair of shoes.

Brown says being eco-friendly and sustainable was "non-negotiable" and the reason he and Zwillinger founded the company in the first place.

"We think of Allbirds as a sustainable raw material innovation company more than a footwear company or wool company. People don't buy sustainable products, they buy great products, so we've tried to focus on great design and making shoes that are comfortable, with a view to work backwards ... to make the shoes as sustainable as possible.

"Sometimes when you hear the word sustainability, certainly in fashion, you assume you are paying more for something that is less good. There's a perception issue, and it requires a bit of a re-think for businesses and brands to [curb] that."

Allbirds uses materials that aren't common in the footwear industry: wool, a eucalyptus fibre and a by-product of sugar cane. 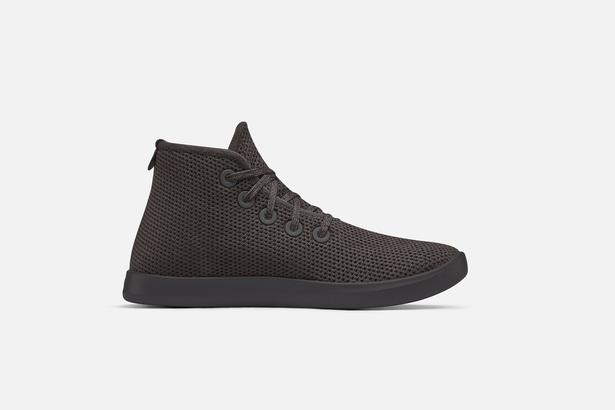 Allbirds' 'Tree Topper' shoes are the first range to use its SweetFoam sole derived from sugar cane. Photo / Supplied

On Thursday it released its first trainer — the "Tree topper" — that features its SweetFoam™ sole, derived from sugar cane.

Allbirds began developing the carbon-negative ethylene-vinyl acetate foam, derived from sugar cane sourced from southern Brazil, in 2016, and hopes the invention will revolutionise the global footwear industry, which churns out an estimated 25 billion pairs of shoes a year.

"The cool part about it is, we made the materials open-source - so it's available for the rest of the footwear industry to use, which is not traditionally how the footwear world operates," he says.

"[Sustainability] is not something we're going to solve as an individual company; it's more a collective movement."

Brown has worn hundreds of shoe prototypes, and says the first designs looked like "something you wear when you have a medical problem".

READ: The Luxury Label Made Behind Bars

Fast forward two and a half years, and Allbirds has a range of seven shoe models, including a jandal. In March the company sold its millionth pair.

The company now has a team of 170 people based in San Francisco. Head designer Jamie McLellan is an Aucklander.

"I read about the challenges of the wool industry in a magazine in New Zealand when I was playing soccer, which kicked off this whole idea," Brown says.

"New Zealand used to have 80-odd million sheep in the 80s and now it's less than 30 million and no one's growing up dreaming about being a sheep farmer ... [it is a] remarkable fibre which has done a pretty poor job of marketing itself."

Retail stores are a big part of Allbirds strategy — but not a chain of stores in every city in every market.

The retailer has flagship stores in San Francisco, New York and most recently in Covent Garden, London, which opened last month. "It will be select retail stores in important markets," Brown says. "I don't think this is a Starbucks story ... it is about the intersection between online and offline business.

"The largest part of our business is online but we're finding offline retail stores are really important places to tell the story and teach people about our materials."

Brown says the US stores have been successful and he hopes to open a New Zealand store soon, though he can't say when or where.

"The dream is to do a store in New Zealand one day soon, so we're working hard on that. I'm from Wellington and it's got a special place in my heart; Auckland is probably the biggest city, so who knows — we'll see if I can exert my influence."

Allbirds is also looking to Asia, including China, for international expansion.

Brown was born in Ascot, England, and moved to New Zealand aged 3. His father is English and his mother a Kiwi.

Brown attended Wellington College and had a short stint at Victoria University, where he studied architecture before accepting a football scholarship to the University of Cincinnati.

He retired from professional football after 10 years, following the 2010 World Cup, to go to the London School of Economics to do a masters degree in international management.

It was at there the idea for Allbirds became serious.

"I had a window of time to sort of take this idea that was very much a prototype and see if it was a business," he says.

"If I didn't have that time, I probably wouldn't have [started] it."

Now based in San Francisco with his American wife and 14-month-old daughter, Brown gets back to New Zealand every year for a holiday, and at every opportunity he gets.

Three cheers for the Tree Toppers! ???????????? Our newest style combines all three of our natural material innovations: breezy tree fabric, cozy wool lining, and a bouncy SweetFoam™ sole made from sugar. Head to one of our stores or to our website and say “high”! ???? #weareallbirds

This week, he's back to give a talk at an enterprise bootcamp — a two-day seminar for entrepreneurs using natural products who want to break into the US market, and will catch up with his friend and fellow wool advocate Jeremy Moon, founder of Icebreaker.

"Talking to some of the farmers down south that make our fibre, wool is having a moment, certainly in the States ... There's enormous potential for the wool industry to continue to grow and do great things in different categories."

There's no better time to be a merino wool farmer, he says.

"The synthetics industry is being challenged as the singular way to make fashionable products. I think wool has worked out how to tell its story a lot better and part of that is the South Island, the prettiest part of the world that you could imagine."

"Many Americans have never been to New Zealand and don't know where it is, but love it nevertheless, and I think there's an enormously big opportunity for businesses or brands to go there and tell the story of a part of the world that looks after the environment and cares about the way products are made.

"The core of what Allbirds is, is sustainable material innovation, and we want to double down on trying to find new ways to make better products because we believe there is a real problem to solve within the fashion and footwear industry."

This article originally appeared on Nzherald.co.nz