Are You Ready For The 'Woke' Red Carpet Season?

As awards season heats up, Luciana Bellini looks at how the stars may shine a spotlight on their social conscience Awards season used to be a time when Hollywood celebrities could put on an expensive gown and enjoy a spot of backslapping and partying in full glare of an adoring public. But Harvey Weinstein spoilt all of that.

Now, it is obligatory that attendees also use their moment on the red carpet to wear their “wokeness” — how conscious they are about pressing social issues — on their designer sleeves.

In the wake of the Weinstein scandal and the rise of the MeToo hashtag, last year’s Golden Globes even implemented a statement-making, all-black dress code

READ: Opinion: Wearing Black Is No Way To Take A Stand On The Red Carpet

Celebrities at the 2018 Academy Awards, Baftas and Grammys followed suit, showing their support for the cause by wearing special Time’s Up pins and white roses.

And woe betide anyone who didn’t get the memo. When actress Blanca Blanco decided to attend last year’s Globes in a risqué crimson gown, within hours she was trending on Twitter for the wrong reasons, and even received death threats. 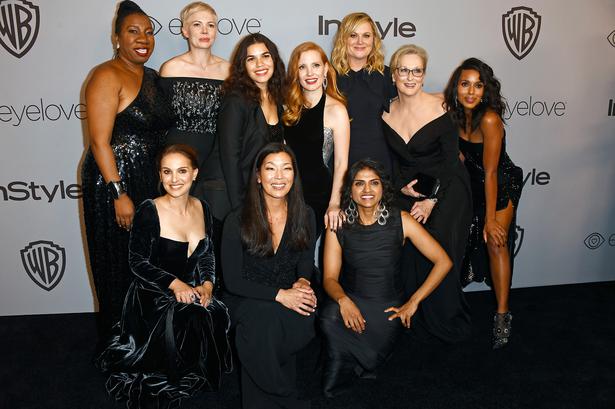 Actors and activists together at the Warner Bros. Pictures and InStyle Golden Globes after party 2018. Picture / Getty Images

But if 2018 was the year that red-carpet dressing got political, just wait till the Baftas in London tonight — and the 91st Academy Awards in a fortnight’s time. With no official-or-unofficial dress code for either, celebrity attendees are said to be opting for crazily colourful gowns.

When it comes to virtue signalling, there are new ways in Tinseltown. The fact this year’s Oscars will be without an official presenter for the first time in 30 years because organisers couldn’t find one “woke” enough is a signifier of just how high the stakes have become. Last month, comedian Kevin Hart was forced to give up the coveted role after a number of old tweets resurfaced in which he reportedly expressed homophobic slurs.

So what is in store this awards season? Early indications came last month, when The Handmaid’s Tale star Elisabeth Moss arrived at the Golden Globes and used it to launch Red Carpet Advocacy. Known as RAD, the philanthropic initiative asks for charitable donations from designers worn on the red carpets; in Moss’s case, every brand she chose — dress by Christian Dior haute couture, heels by Tamara Mellon — made donations to the American Civil Liberties Union.

Though the process is simple — the stylist and celebrity pick out their red-carpet look as usual, RAD approaches the chosen brands for a donation to a charity of the star’s choice, and when their clothes get discussed, during red carpet interviews, in magazine features and on social media, so does the donation — it’s one that could yet change the face of event dressing.

“Celebrities need to be very careful now, especially with things like fur,” says Swennen. “I remember when People for the Ethical Treatment of Animals (Peta) would flour-bomb people like Kim Kardashian. Nobody wants that type of backlash anymore. Now the red carpet is a space for celebrities to speak out, and everyone’s taking a stand.”

For Swennen’s clients, that means ditching anything that might not pass ethical muster. “My clients won’t wear coral, they won’t wear non-ethically sourced diamonds. It’s something I’m having to constantly ask designers these days. If the feathers on the dress aren’t ethically sourced, don’t bother sending it.

”Not only is the red carpet becoming more ethical, it’s no longer accepted that fashion houses can refuse to dress stars just because they don’t conform to the size-zero norm. Take Melissa McCarthy, who has spoken previously about how no designer would dress her for the 2012 Oscars: “I asked five or six designers — very high-level ones, who make lots of dresses for people — and they all said no.”

Fast-forward to today, and she’s Oscar-nominated again, this time for Best Actress, and everything’s changed. “McCarthy is an A-lister,” says Irene Albright, former stylist and owner of the Albright Fashion Library. “She’s not going to have to scrounge for a gown.”

Set in a mansion up in the Hollywood Hills, complete with a huge crystal chandelier in the hallway and an outdoor pool with amazing views over the city, the Albright Fashion Library is an insider’s secret, somewhere top stylists and celebrities go when they want something different for the red carpet. In addition to their archive of more than 7,000 items of vintagewear, it spends $2 million USD a year on acquiring new pieces for loan.

Albright has noticed subtle shifts in red-carpet tastes. “We definitely have to cater to plus-size clients more often now, and I always get in a range of sizes for that reason,” she says. “I’m mindful to have pieces to loan to older stars, too; I’d never dress a woman over a certain age in a sleeveless gown.”

She adds that more and more people are asking for ethical and vegan fashion now, meaning that some start won’t consider brands that use leather or fur in their collections.

“They prefer to engage emotionally with brands which have a clear social agenda. Our intention is to modernise the carpet and make it socially relevant.”

As well as working with Moss at the Globes, RAD partnered with stars such as Mandy Moore and Patricia Arquette at this year’s Screen Actors Guild Awards, donating to Unicef and Give Love, a clean water charity, respectively.

They are also teaming up with singer Camila Cabello at this year's Grammy Awards to support Save the Children, and have been working with an “undisclosed actress” ahead of tonight’s Baftas.

But whatever you wear, starlets, be warned: the red carpets are on red alert.