The Australian designer talks through his latest collection, longevity in fashion and what's keeping him inspired For Christopher Esber's spring 2020 collection, he's branched out into evening-wear but done his way. Photo / Supplied

“I think when things start to feel a bit stupid, and fashion and fussy, I just don’t like it,” the Australian fashion designer says of his design process. “It’s a weird feeling I get, like ‘ooh, it’s too fashion’ – like it’s a bit too try-hard, too trendy. Then I just pull it back a bit.”

For those familiar with Christopher’s clothing, it would come as no surprise that he harbours such sentiments. Since founding his eponymous womenswear label in 2010, he has built an internationally successful brand on his understanding that timeless, sophisticated and elevated pieces are what we’ll keep coming back for – not momentary, and therefore passing, trends.

Informed by his background in menswear, Christopher Esber collections are anchored by their designer’s love of tailoring, juxtaposed with effortless fluidity and quietly sensual details, and his particular brand of relaxed elegance has found fans in celebrities like Solange Knowles, Zendaya, and Emily Ratajkowski.

His latest collection in stores, spring 2020, expands on these parallels.

“Generally the first thing I draw is the suit and the feel of the season within a blazer and trouser,” he explains, speaking from his workroom in Sydney. “What’s newer has been the more feminine, dreamy, ethereal elements that work really well with those more aggressive, masculine shapes.”

Auckland boutique Muse is New Zealand’s exclusive stockist for the brand, with a selection of the new season styles available now. Owner Olivia Vincent Healy met Christopher six years ago, and fell in love with his design sensibility. 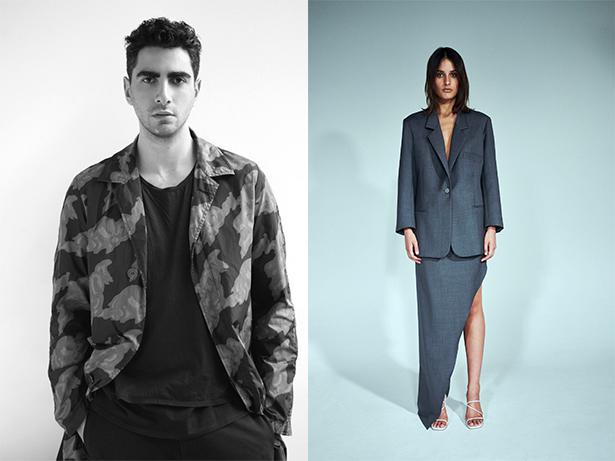 “I've loved watching his brand evolve, his tailoring is impeccable and I can honestly say that half my customer base own a pair of his bias-cut trousers - nothing compares,” she enthuses. “The bias cut is so flattering on all body shapes, they elongate the leg, don’t crease and the tiny bit of elastic around the waistband makes them so comfortable, genius.”

Christopher praises Olivia and her team’s ability to select pieces the Muse customer always loves. These include some of the brand’s signature knitwear. Functional and versatile, Christopher Esber’s convertible knitwear is designed to deconstruct with adjustable buttons; a dress becomes a top, sleeves can button off or be semi-undone to reveal an unexpected flash of skin.

There’s always a deconstructed element, whether it’s a blazer sliced open at the sides, or an open back on an otherwise demure dress. “It’s that idea of release – something that’s so structured is then unraveled or undone to add a bit of ethereal mood to it.”

READ: The Jacket Is This Decade's Most Important Wardrobe Staple

It’s this combination that makes women feel good in Christopher Esber’s clothes – no one wants to feel like they’ve tried too hard. “You want it a bit more effortless and like 'oh I just threw this together' - it's more charming. Everyone wants to be that girl.”

One of Christopher’s personal favourites from the new collection brought a flurry of fresh attention to the brand when it was worn by American actor Zendaya to an awards show late last year: the crystal tie cocoon dress. Featuring a clean, one-strapped neckline with a ruched puff skirt and an interweaving crystal detail through the torso, it’s eveningwear done in the designer’s own way. From left: The Deconstruct skivvy in green multi, $550 from Muse. Actor Zendaya in the Crystal Tie Cocoon Dress, $3450, from Muse. Photos / Supplied

“We've always done that casual elevated thing - like the knitwear and the tailoring's always had a softer relaxed element,” says Christopher. “Relaxed is probably the best way I can describe the brand, because when we do eveningwear or when we do knitwear, there's always this undone relaxed element to it.”

Having abstained from diving fully into the more formal realm until now, it was important to Christopher to hold on to his nonchalant vibe, which comes through in the clean silhouette of the gown – despite the crystals and full-length skirt.

Adding footwear to the fold a year and a half ago has also been important for the label. “It’s definitely been a great way for people to really understand the brand. I find the choice you make in footwear is really what defines the woman and where she’s going.”

Being able to finish off the look and visually communicate how the brand intends it to be worn helps people understand the overall ethos, says Christopher.

‘Clever’ would also be a good descriptor for Christopher’s designs, mirroring the man himself and his 360 degree understanding of the business of fashion. In speaking to him, I can tell Christopher thoughtfully considers things from all angles. He might have a well-honed aesthetic, but tunnel vision it is not.

“I think it's that notion of not running before you can walk,” muses the designer. Understanding each aspect of the business from press to production, growing the wholesale division and partnering with retailers has all been necessary for achieving longevity in a notoriously challenging industry.

“I still work with accounts that I worked with from the first collection. It’s [about] really understanding each customer base, and what they’re looking for.”

This year, just as Christopher is celebrating a decade with the brand, everything has changed – drastically. He’s up for the challenge, though.

“It's definitely been interesting. We've been looking at what we've been doing as a business,” he says. “There are so many collections we're doing a year - you're constantly on this wheel, running to the next one. It's a bit of a luxury in a way to have time to slow down and rethink things, and how we operate.”

One of the conclusions the team has come to since the pandemic struck is they’re going to produce less, creating smaller collections and releasing two to three a year, as opposed to the previous standard of at least four.

It’s an adjustment that many in the fashion industry are looking to make, as the relentless cycle of newness reaches an unsustainable peak.

“A crisis like this puts a lot of things into perspective.”

Outside of rethinking his business strategy, Christopher has taken up a new hobby and has been spending this extra downtime learning about the world of fragrance.

“I’ve always had a very fond interest in fragrance, creating scents and that sort of thing so I’m actually doing an online course at the moment,” he says.

He’ll try his hand creating perfumes for close friends before seriously considering it as a next step for the brand. “I could be really bad at it, so if they don’t have allergic reactions it might be the next fragrance for the brand,” laughs Christopher. “I mean, I don’t know but I think it’s just something fun to play around with.”

If this ever eventuates, we’re sure many women (and men) would jump at the chance to embrace yet another expression of Christopher Esber’s talent.

This Exhibition Of Two Australian Design Icons Is Fashion Paradise

'Jenny Kee and Linda Jackson: Step Into Paradise' is an explosion of couture, colour and cockatoos

Meet The Designers Behind Aje, The Australian Fashion Label To Know

As they open their first international store at Westfield Newmarket today, designers Edwina Forest and Adrian Norris share the ...