Among the ceremony and splendour of Paris’s Palais Royal, olive trees daintily bristling in the warm June breeze, blood-curdling screams are ringing out across the courtyards and cloisters, as if the revolutionaries had come for those pampered, pompadoured heads once more.

Except the bloody overtures are of a more 21st century pandemonium; this time King Kanye, and his modern day (but just as decorously adorned) Marie Antoinette, Kim Kardashian, arrived for the Louis Vuitton SS19 menswear show, the debut collection from Virgil Abloh, West’s friend and collaborator. They were greeted with the kind of frenzied scenes that make the French Revolution look like a mix up over the madeleines at Angelina’s.

But then again, there was a potent air of expectation hanging over the Paris men’s fashion week merry-go-round that closed on Sunday, and one that will eventually have an effect on how men dress from Saint Germain to St Albans. Two noble houses — veritable French dynasties — were going head to head, hoisting their flags and issuing a battle cry to herald a new era in men’s style. Vuitton welcomed Virgil Abloh’s first, streetwear-infused offering, while across in the 4th arrondissement Dior (we’re calling it Dior Men now, not Dior Homme) debuted the first collection from Kim Jones, the British designer who left Vuitton in January in a game of menswear musical chairs.

And oh what a circus, oh what a show both affairs were. Vuitton created a Pride coloured rainbow on a catwalk running the entire length of the historic palace’s gardens. It was a democratic celebration of inclusivity and diversity, with 3,000 gleeful fashion students decked in complementing bright hued T-shirts, a live band that veered from hip hop to jazz and Chadwick Boseman, Kylie Jenner, Rhianna and Alexander Skarsgård nestled alongside the two Special Ks. And as if to highlight their point of difference, Kim Jones chose the exact antithesis of this set up for his grand reveal (rumoured to be the most costly to date for any Dior men’s show); a tightly tiered, circular amphitheatre with a giant cartoon structure, by pop culture artist Kaws, made of 70,000 roses (a favourite of Monsieur Dior) in the middle, clutching a rendering of Dior’s dog Bobby. Bobby looked on as Kate Moss, Victoria Beckham, Naomi Campbell and Bella Hadid took in Jones’s modern rendering of light, airy men’s couture. Two very different approaches, but both underlining the fantastical fanfare that now surrounds men’s fashion.

These aren’t scenes that would have happened 10, or even five, years ago, but men’s fashion has accelerated at lightning speed. According to the British Fashion Council, sales of menswear are expected to grow by 11 per cent between 2018 and 2022 to reach sales of £17.1 billion (approx. $33 billion NZD), closing the gap between womenswear and menswear for the first time.

Men are spending more on their wardrobes, and the fashion houses are clamouring to give them more choice. The show of force behind these two “moments” (for fashion is all about creating a “moment”) was designed to underline the full might of what houses like Vuitton and Dior, both of which are part of the LVMH luxury conglomerate owned by Bernard Arnault, can do. And the offerings from each showed two very different interpretations of what luxury means, and how men dress now. 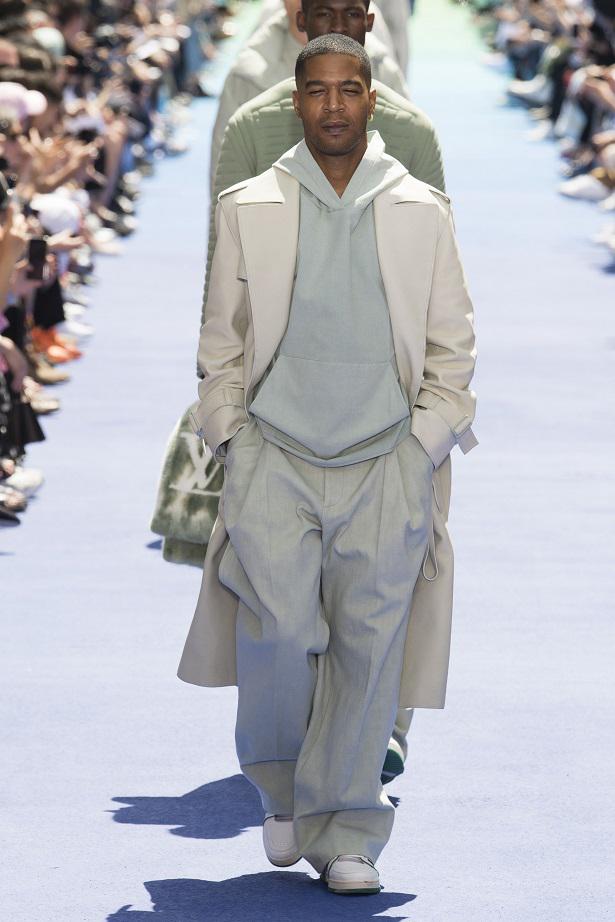 Eyebrows were raised when Virgil Abloh was announced as Louis Vuitton’s new head of menswear. A designer with no formal training, sometime DJ and occasional furniture designer, the Illinois native had found fame through his cult streetwear label Off-White and his kinship with Kanye West, and ridden the crest of the tsunami of streetwear clothes that have been aped across the men’s fashion landscape in recent years. That is, tricky looking trainers, slouchy hoodies your teenage nephew might wear, baggy puffas and jogging bottoms re-packaged and re-worked into luxury items, with a cult following behind when and where they “drop”, as seen at NY skater label Supreme, who last year collaborated with Vuitton.

Abloh’s debut kept true to his casual, sporty DNA, with silver ponchos, vivid parkas and bomber jackets embroidered in images of Dorothy from the Wizard of Oz, that other dreamer from the Midwest. And while the Paris gentleman who once bought his crocodile briefcase at Vuitton might choke on his macaroons, Abloh perhaps speaks to a man who longs to dress like a millennial but has the budget of a High Net Worth individual. Certainly, the demigods of Silicon Valley are now way more likely to don sock trainers (strange hybrids of both) than a tired old tie.

Over at Dior, Kim Jones swung to the other end of the spectrum and spoke to another kind of man entirely; creating a series of outfits erupting with florals, a porcelain design inspired by chinaware in Monsieur Dior’s house, and a pattern using a couture technique where feathers are hand dyed and teased into shapes then layered over with vinyl, a masterclass in the kind of skill the Dior atelier can lay claim to. It also pointed, in a climate where casual wear is king, to a focus on specialness and creating rare and beautifully made clothes.

Will it parlay into what you will find yourself wearing next spring? In a literal way, no. But it might signal a swing away from sporty ease to a more grown up sophistication. It’s telling that Sarah Burton at Alexander McQueen took this route at her Paris menswear show too, with beautifully embroidered suits and razor sharp, exquisitely cut tailoring.

Talking of which, it’s no secret that the poor old suit has had a rough time. Men are no longer engaging with the full kit and caboodle of tailoring anymore; instead of a matching jacket and trousers, with a shirt, tie and “proper” shoes, you’re just as likely to see a blazer with chinos, a sweatshirt and trainers or trousers with a T-shirt; the rise of streetwear in effect, with sales on the decline. 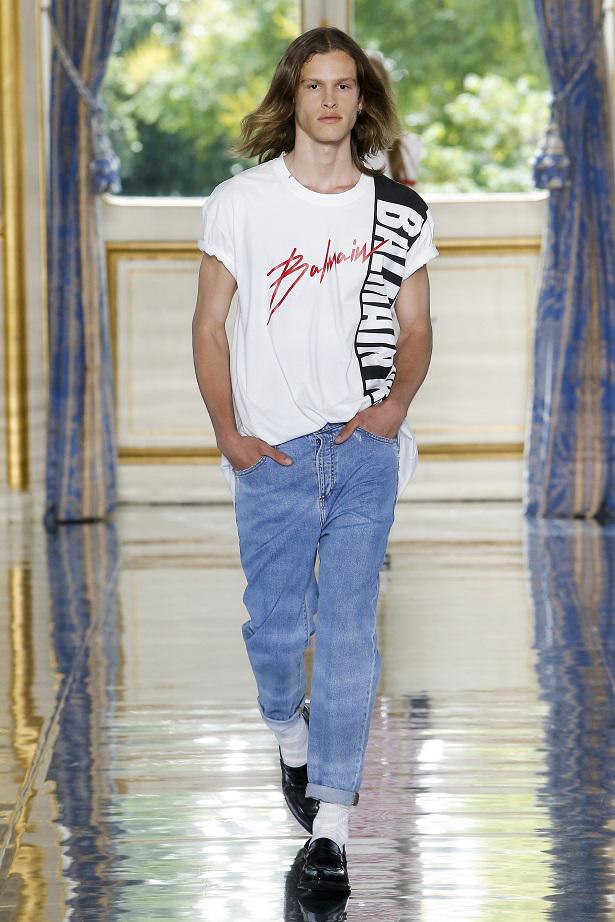 Which is why designers are tampering with the template: Vuitton and Dior’s response was offer a more fluid, airy cut; Abloh’s pristine lightweight, cream suits came fastened on the side with cut away panels, while Kim Jones tasked tailors at Dior with creating a suit that draped across the torso with a single button on the hip, in a soft, fluid silhouette.

Both iterations looked modern; it’s telling that throughout the entire menswear circuit, in January and June, I can’t recall seeing a single tie. Who wants a trussed up two piece your grandfather would wear when you can cruise by the Seine in one of Jones’s soft, breezy numbers.

Of course, that’s the mythic ideal, the story that fashion brands seduce us with to part with our cash, but the reality in what that means for your wardrobe is that tailoring will ease up, sportswear will continue to dominate and a new focus on special, handcrafted clothes will perhaps take pole position too. And those are welcome concepts whether you’re a Parisian gentilhomme or a Primrose Hill 40 something.

Alexander McQueen
This standout show contrasted exacting, severe tailoring with artistic exuberance. John Deakin’s images of sketched faces were rendered in beaded embroidery across a coat and suit, with a coat and blazer streaked with a “brush stroke” of hand-sewn 3D threads.

Lanvin
Lucas Ossendrijver used the term “blown up” to describe the lightness that infused his collection, with puffs and clouds of fabric. He adapted garments to form two kinds in one; T-shirts that ape the appearance of a shirt at the back, jackets with waistcoat inlays and beautiful, deliberately crumpled knitwear. 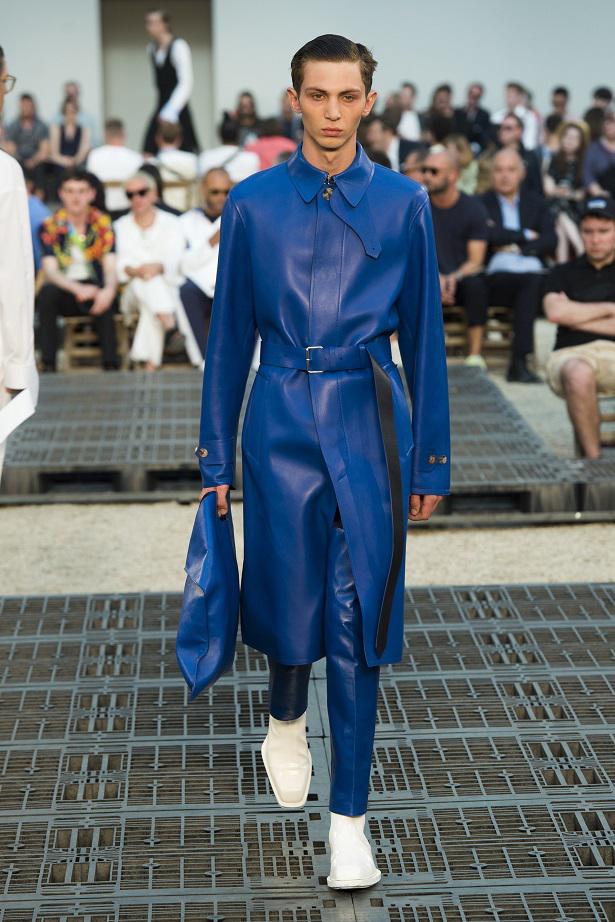 Paul Smith
Smith chose to highlight the fact that, for almost 50 years, he has been at the forefront of British tailoring. He married traditional plaids and windowpane checks with track tops and blousy trousers, alongside a series of pastel hued blazers and trousers that lightened the mood considerably for spring.

Dunhill
Mark Weston at Dunhill hit his stride showcasing the house’s exacting tailoring and skill in leather craft. The cut on nipped-in jackets and trousers was sharp and lean, with supple leather in fawn and moss on jackets and trench coats, alongside the latter in silk that hit a spring note.

Hermes
While other houses grapple with how to apply casualness to extreme luxury, Veronique Nichanian can rest easy. The designer showed this with drawstring trousers in rich, burnished tones and cashmere sweaters in a fragmented graphic print.

Take it to the streets. A well balanced winter wardrobe consists of equal parts smart and casual. Stay current with these upbea...