David Beckham was in fashion hot water for wearing them with red socks recently. Frances McDormand had the most talked-about outfit of the night at the Oscars by wearing them. They were an essential component of Kate Moss’ 90s insouciant-chic uniform. You and your school geography teacher have probably worn them.

Yes, it’s Birkenstock, the king of the ugly shoe crowd. Historically renowned as the world’s comfiest, most practical and least elegant sandals, the chunky footbed style — of which 25 million were produced last year — has its roots in 18th century Germany and has always been resolutely, self-consciously, defiantly not fashionable.

“The normal reaction of the old Birkenstock company [to being in fashion] was always: ‘Oh, we’re a bit annoyed about all this rubbish coming.’ They were focused on their business and helping people to get good health for their feet. It’s really very narrow-minded,” explains Oliver Reichert, the brand’s chief executive, who is the personification of an imagined Birkenstock-wearer — a tall, hirsute Viking wearing Mayari sandals in a muddy shade of mocha.

His love for Birkenstocks began when they were the only shoes that fitted him as a 13-year-old boy with size 47 feet. 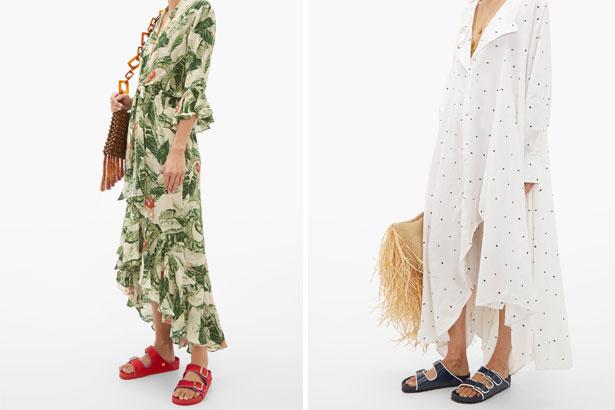 I am talking to Reichert on the terrace of a very (you may think) un-Birkenstock location, the ultra-fabulous Il Pellicano hotel on the Mediterranean coast of Italy, two hours north of Rome. It’s a destination that has been memorialised in glamorous shots of its jet-set clientele lazing on its terrace by American photographer Slim Aarons. Opened in 1965, it’s Instagram gold from an era before mobile phones even existed. So why is Reichert here?

The top line is that Birkenstock is ready to be fashionable — or perhaps he would prefer to call it “culturally relevant”. The brand has just introduced its 1774 branch, in time for the European spring/summer 2019, and aims to explore collaborations that take the shoes beyond the core designs. Valentino, the avant-garde designer Rick Owens and now Il Pellicano hotel are among the collection’s first partnerships.

“1774 is much more than just fashion,” Reichert believes. “It is a project that is alongside the regular business [which rakes in $800 million a year], to build a bridge to the outside world, which could be architects, fashion people, normal people, artists, tribes, any kind of organisation. It’s too limiting to push it into a fashion corner. It’s not enough, because Birkenstock is not a fashion brand. It is an orthopaedic shoe brand. I know it’s ugly to listen to, but that’s the truth.”

Reichert is adamant that a deep love for the company is essential in its collaborators, “otherwise go to a sneaker company or something”. Birkenstock may not want to be put in a fashion box, but fashion loves Birkenstock. Most famous, perhaps, was trend soothsayer Phoebe Philo’s reinterpretation of the Arizona style for her Celine spring/summer 2013 show — the fur-lined version she showed became a much-aped cult classic.

Another tastemaker fan is Marie-Louise Scio, the ultra-chic chief executive and creative director of the Pellicano Hotels Group. The Birkenstock hook-up was her idea. “I’ve been an avid Birkenstock-wearer for 20 years. Everyone made fun of me when I started wearing them; the perception of Birkenstock was different 20 years ago versus today,” she says, admitting that she owns at least 25 pairs. “I’ve wanted to do a collaboration for three years. I live in the hotels all summer, but I couldn’t wear them too much because I needed something a bit more formal, slightly more elegant.” The insinuation is that normal Birkenstocks are not quite polished enough. This collection, comprising seven takes on the Arizona style, melds the comfy ease and chunkiness of a Birkenstock with a Pellicano-worthy luxe finish; there’s an £80 cobalt version of the EVA style that made up 15 per cent of Birkenstock’s output last year, with nautical white buckles. The other styles come in at £310 and include a mustard with white piping (echoing the hotel’s famous towels), a gorgeous oatmeal raffia and a black satin with gold buckles, which will be stocked exclusively on Matchesfashion.com.

Of course, it was Frances McDormand who blazed a trail for the Birkenstock as this year’s chicest dressed-up shoe option when she teamed her Valentino gown with a pair of yellow Arizonas from the 1774 offering at the Oscars.

Reichert is delighted: “What she did is exactly what every woman or man in the world should do; do what you believe in. We are proud to have such a person brave enough to stand against all the pressure coming from this industry that you have to be sexy. Just guess how many millions were spent for this night, how many people were doing stuff for the nicest dress or the nicest jewellery — but everybody else disappeared, beaten by yellow Birkenstock.”

• Available to pre-order on Matchesfashion.com. Launches worldwide on June 15