I can still recall the first time I set foot inside a Toms store. It was the brand’s flagship space on the achingly hip Abbot Kinney Boulevard in Venice Beach, designed by L.A-based design studio Commune Design.

The smell of roasted coffee lingered, while wooden tables and chairs dotted around reinforced the communal aspect of the business. Languorous, tanned Californians hung about, some reading about conscious travelling, others conversing with like-minded, socially conscious customers. A meticulously dishevelled singer-songwriter performed, while the shady outdoor area with a patch of grass and deck chairs provided some much-needed respite from the beating L.A. heat.

“In a digital world, physical spaces are important,” explains Blake Mycoskie, the gregarious LA-based founder and ‘chief shoe giver’ of Toms. “I wanted to create community outposts. I don’t even like to call them stores. They’re really about identifying communities where there are other like-minded people who have an interest in the Toms mythology — using business to help save lives. It’s an opportunity to stop and have community by creating an experience, rather than just selling stuff.”

They do sell stuff: sunglasses and tote bags, but mostly shoes. It’s what Toms, a brand that has pioneered the one-for-one business model, is known for. Blake founded the company in 2006, with the first 250 pairs of shoes based on the classic Argentinian style known as Alpargatas: a simple slip-on canvas shoe with a rubber sole Argentinian farmers have been wearing for more than a hundred years.

What started as a small project out of Blake’s apartment ended up attracting plenty of attention from retailers. Toms hit its stride in the mid-noughties, a time where there was nothing else like it in the market. Fashion became increasingly democratic, and the high-low aesthetic gained momentum. The effects of 9/11 lingered in the psyche of everyday Americans, and the full weight of the global recession was only around the corner.

People wanted to look and feel good about what they were purchasing, in a time that saw the return of new-age philosophies on the back of Hollywood’s obsession with Kabbalah and hybrid versions of yoga. What better place to sell the idea of self-improvement than a town as self-aware as Los Angeles?

“The fashion world gets a bad reputation for being cut-throat and materialistic. So when we entered the market, it resonated with people in that world, especially media and retailers. We eventually began stocking at Bergdorf Goodman’s where our shoes would be in the same department as a pair of $1000 Louboutin heels from Paris, so it was a really interesting time for us to enter the market,” says Blake, on the phone from Sydney.

READ: Meet the founders of Eat My Lunch 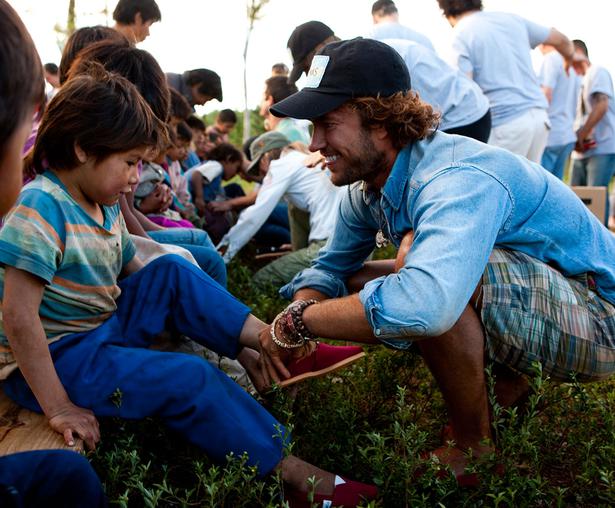 “There was a real move in the US from a fashion perspective to not wear a single brand from head to toe. I’d see girls walking down the street wearing a Chanel jacket, jeans and a pair of Toms.”

The Texan-born entrepreneur, who recently spent a family holiday with his wife Heather Lang and son Summit, fly-fishing in Poronui and visiting Queenstown, is optimistic but reflective about the future of the brand. This year Toms turns 10, and Blake will also be celebrating his 40th birthday.

“When I look back, I’m super-grateful. I write in my journal every day and being on vacation has helped me have time to think. I had no idea when I started the business that it would become what it has become. We give in about 60 countries now, and we’re continuously developing ways to make a difference.”

Expanding the original premise of giving back, the brand recently re-worked its “one for one” motto into a broader slogan that captures its evolution over the past 10 years: “For one, Another”.

The company’s evolution has transformed Blake’s life, and made him an entrepreneurial superstar. The company thrives on its philanthropic endeavours, but it’s a model that has made Blake millions. In 2014, Forbes reported that investment firm Bain Capital had acquired 50 per cent of the Toms business, with Blake retaining the remaining 50 per cent.

It’s a profit that will no doubt continue to grow. The product has also evolved, going against the idea that ethical fashion isn’t fashionable. Its design department now has access to resources that help give its products the technical finesse that rivals some of its high-fashion contemporaries.

“The truth is, the most successful, balanced people I have met in the world are the ones that are doing something they are deeply passionate about,” says Blake. “They’re not just doing it because of the money.”

The company has paved the way for businesses adopting a one-for-one philosophy and putting people ahead of money, such as Auckland-based Eat My Lunch, which gives a free lunch to a Kiwi kid in need for every lunch sold. It’s these businesses that Blake wants to get behind, announcing in November that the company would launch an investment fund aimed at emerging for-profit start-ups that have a social consciousness imbued within its bylaws.

“This is about us wanting to help the next generation of entrepreneurs to start socially responsible businesses by sharing more information,” he says, having put $100 million of his own money into the fund. “So far, we’ve invested in about 10 companies from diverse sectors such as groceries, environmental waste, apparel and even an art company that represents homeless people by using their talents and getting them off the street.”

The Toms empire has, however, had its share of criticism over the years. Sceptics have called out the company for its superficial approach to making consumers feel good about themselves rather than getting to the root of the problem, plus the lack of employment opportunities for the countries Toms focuses aid towards. In an interview with the Huffington Post in 2013, Blake gave a surprising response to critics who were arguing that the most effective way to eradicate poverty was to create more employment opportunities.

“There really is a lot you can learn from the critics. You can either try to debate them and fight them or you can embrace them, and that’s what we’re trying to do.” Toms now has a factory and hired locals in Kenya, and “responsible and sustainable” factories in Ethiopia and Haiti.

The brand disarms its critics in other ways too, particularly through its more glamorous endorsements via celebrity fans such as Ben Affleck, Bradley Cooper, Emma Stone and Charlize Theron (who has collaborated with Toms on limited-edition styles to help the Charlize Theron Africa Outreach Project, which works to keep African youth safe from HIV/Aids).

There have been numerous fashion collaborations, including with Ralph Lauren, the Olsen twins’ luxury brand The Row and stylist Tabitha Simmons. The ultimate seal of approval however came from Anna Wintour at the beginning of the brand’s trajectory.

“The very first story that was ever written about Toms was in Vogue, and Anna has been a huge supporter ever since,” says Blake. “That first story introduced me to so many of our key retailers and partners, and so many other people in the fashion world.”

The business world has also taken note. In 2014 Blake was invited by Sir Richard Branson to join a distinguished group of business leaders as part of The B Team, a not-for-profit initiative that includes Branson, B team co-founder and director of luxury goods conglomerate Kering, Jochen Zeitz, Kering CEO and chairman François-Henri Pinault, and President and CEO of the United Nations Foundation Kathy Calvin. 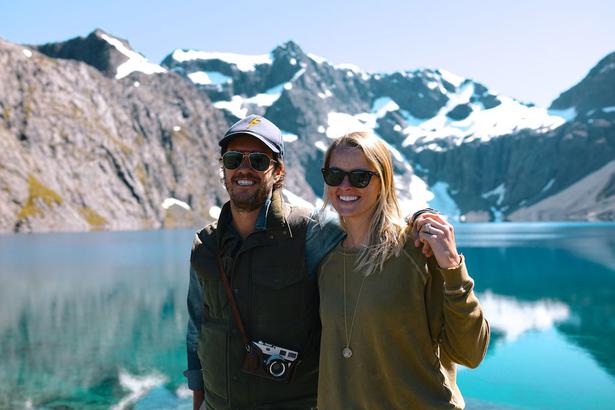 Blake and wife Heather on holiday in Queenstown. Picture / Supplied.

“I was deeply honoured to be asked to be a part of the team and I think I can bring a different perspective to the other business leaders,” explains Blake, who is the youngest member on the team. “I can also learn a great deal from people who have been down the road before me, from their mistakes and successes. What’s inspiring is the business leaders like Paul Poleman at Unilever who are still learning and using this stage in their life and in their business to really have more impact from a societal standpoint.”

And as for the next generation? “It’s really important to not take a job for the money,” advises Blake. “It’s a cliche, but it really is true that people need to follow their passions.” But does Blake ever have time to unwind from the responsibility of being so responsible? “I’ve started meditating, but I mostly relax by doing something active. If I’m sitting on a beach, within 15 minutes my mind is thinking about something else. That’s why this New Zealand trip was great for me.”

He is also a firm believer in taking at least one family vacation a year to “experience somewhere new together as a family”, an idea not too far from his approach to navigating the often volatile nature of running a global, multi-million dollar business.

“The journey really is the destination. Some the best memories in my life are the early days of Toms when we weren’t sure if it was going to work.

“There are certain things that success brings and one of them is the lack of that hardship and sincerity. I felt so alive that time, even though I was scared and wasn’t sure what was going to happen. My dad always told me, no matter what you do in life you’ll always look back and have the best memories of the times when it was the toughest. It’s about enjoying being present and making the most of the journey along the way.”