If the role of a stylist is to simply hunt and gather outfits for a money-rich, time-poor client, then Law Roach has gone above and beyond. Under his watch, Céline Dion, the stadium-filling singer who had stuck to an often unexciting, occasionally cheesy sense of style since she wore that backwards white tuxedo and tilted hat to the Grammys in 1998, has become Vogue’s unlikely new darling - at the age of 49.

The phenomenon was crystallised at last month’s Paris Couture Week, where Dion sat front row next to Anna Wintour, US Vogue’s editor-in-chief, and was shot for the title wearing outfits by Chanel, Dior and Giambattista Valli - a first for the Québécois artist, who released her first single 22 years ago.

While it may have looked like a sudden introduction to the fashion world, Dion and Roach have actually been planning the ascent for a year, testing the water in acid yellow Balenciaga dresses for day and sculptural gowns by Christian Siriano on the red carpet. Last summer, just a few months into working with her new image-maker, Dion attended her debut couture show and enjoyed the experience so much that she gave designer Valli a spontaneous standing ovation. The typically po-faced fashion crowd couldn’t help but raise a smile.

Then came the look that catapulted Dion into the echelons of high fashion consciousness: a fresh from the catwalk Titanic emblazoned jumper by white-hot label Vetements. This from the woman who, lest we forget, sang the film’s epic theme tune, My Heart Will Go On, 20 years ago.

“I thought that she might think it was cheesy and tacky,” laughs Roach of the moment, which promptly went viral. “But she said ‘I want to wear it right now!’ ”

The frivolity and sense of irony behind that Vetements Titanic look is indeed exactly what Dion wanted from Roach and her new-found fashion habit - a distraction after one of the most difficult years of her life. In January 2016, Dion’s husband of 22 years and manager of 33, René Angélil, passed away after suffering from cancer; two days later, she lost her brother Daniel Dion to the same disease.

“I’m a firm believer that things happen when they are supposed to and I think that us partnering up when we did and having an amazing time was meant to be,” Roach says of Dion hiring him a few months after. “She was dealing with, and I’m sure she is still dealing with, the death of her husband and her brother. She was going through a lot of tragedy and, as she puts it, the dresses and the bags and these lighter moments have helped her with her recovery.” 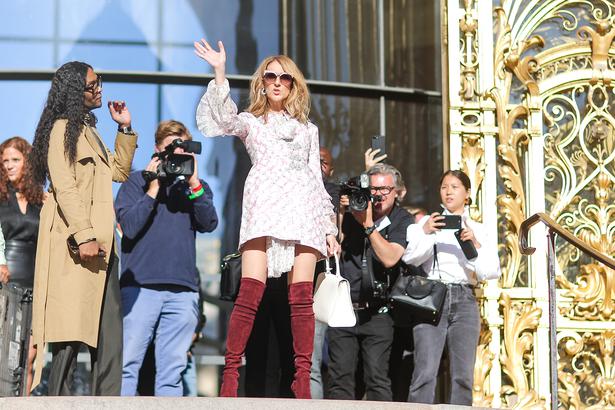 Celine Dion and her stylist Law Roach (in coat), outside the Giambattista Valli couture show in Paris. Picture / Getty

Dion found Roach via Google after admiring his work for another client - 20 year-old Disney star Zendaya. “Céline she has two young boys, so she watched Zendaya’s Disney show, then she started to see her on the cover of magazines and realised it was the same girl,” explains Roach. “She liked her style and started to research her, and that led her to me.”

Roach’s ageless, sophisticated approach to dressing his young client appealed to Dion, despite a 30-year age difference between the two.

Perhaps because of her powerhouse voice, or her teenage fame, Dion has always struck a serious figure, seeming mature beyond her years.

“She’s always been this girl though. The world just hadn’t noticed yet,” Roach says. “People knew her as the voice and this legendary pop icon, but she’s letting you see another side to her now. She’s reminding us all that fashion is something to be enjoyed rather than feared.”

The timing of this year’s round of couture shows coincided with the French leg of Dion’s world tour, calling for a wardrobe of epic proportions that operated out of a special dressing suite at her hotel, the five-star Royal Monceau.

“The clothes you see are all her own; she comes to this room to get dressed every day,” Roach says of the picture of their boutique-like workshop, stacked with rows of shoes and Hermès bags, that went viral on social media.

“She comes down in the morning, we greet each other, and then, based on her mood, we’ll choose her outfit for the day.”

On stage, the singer has always worn bespoke pieces, commissioning ateliers to adapt runway looks to include Velcro panels so that her ribcage can expand, and embed metal shanks into shoes for extra support. But off-duty is where she has really upped the ante, showing herself to be a fearless trier of trends, from the beautiful (an Alexander McQueen gown) to the bizarre (an all-white Ralph and Russo caped suit).

“I can literally bring Céline any silhouette, any colour, and she will want to see it on,” says Roach. “Some things just don’t work, that’s the nature of fashion, but she’s never afraid to find out.”

Which is exactly what’s so appealing about Celine Dion’s sudden fashionable-ness.

Modelling couture looks straight from the catwalks in a video for US Vogue, Dion preens, sings and eats a cream cake in one bite, wearing a Giambattista Valli tulle gown that will have taken hundreds of hours to hand cut. It’s refreshing to see anyone revelling in that exclusive, fantasy fashion world - not least a woman in her 40s.

Confidence, Roach says, is all that he ever wants his clients to feel. “My feeling is that women should be able to wear whatever they want. I don’t think it’s fair for people like myself, supposed authorities, to say that if you’re this age, or this shape, then you should only wear this. Whatever it is, if it makes you feel beautiful and confident and secure, then you should wear it.”

And if it’s a sequinned Chanel bowler hat, worn on a clipper bombing down the Seine, then all the better...