For a long time, the fashion designer Christian Siriano has been known to the wider public for a series of expressions — catchphrases you could call them — that he hasn’t actually used for about eight years. It was part of the curse that comes with winning a reality show when you are a brash 21-year-old with nothing to lose, and until this summer it seemed doubtful Siriano would ever be able to shake it off. But then, one afternoon in June, he was browsing Twitter when he spotted a Tweet from Ghostbusters actor Leslie Jones.

“It’s so funny how there are no designers wanting to help me with a premiere dress for the movie,” Jones had written. “Hmmm, that will change and I remember everything.”

Change it did, thanks to Siriano, who immediately jumped in with an offer to design Jones a red-carpet gown. He had barely two weeks in which to do so. For the actor it was a rare bright spot at a time when she was being deluged by a series of hateful, often racist, tweets that briefly drove her to abandon Twitter altogether.

“With Leslie it was really important to make sure the dress was quite classic because everything else was so strange — everything was such a social media thing,” recalls Siriano. “So I felt it was important that the dress wasn’t weird.” The simple but striking red gown he made for Jones won rave reviews and turned the duo into fast friends. But it was another dress that cemented his growing reputation as a designer.

At the Democratic convention in July, Michelle Obama stepped on to the stage to give her barn-storming speech, wearing an elegant Siriano-designed cobalt blue number — the second dress she’d worn by the designer in the space of a month (the first was for a funeral for police officers killed in Dallas). Twenty-five million people were watching the First Lady on TV that night, and many millions more would see her speech the following day in news clips and online.

It was a moment in which you could feel fashion’s centre of gravity shift in Siriano’s direction. A subsequent New York Times story heralded him as a designer who had built his career on “catering to women regardless of age or size”, characterising the First Lady’s choice as a rebuff to Trump’s misogyny. It may also have been a subtle dig at the bigger fashion houses that have found themselves out of sync with the times, unable to kick the habit of sending skinny white girls down the runway, and grasping for relevance in an era of social media that has exposed fashion’s shibboleths to unwelcome scrutiny. Siriano, who is so plugged into social media that he once designed a dress composed of Tweets, is seizing his moment.

A few days after meeting Siriano at his New York studio I see the influence of his younger self in a random publicist’s pitch in my inbox, subject line: “Young Designer Debuts Edgy New Line”. My hand hovers over the delete button, but I keep reading: “Ready to set the fashion world on fire with his new clothing line HOT ME$$, fierce designer Matt Sarafa has an aesthetic all his own and is a rising talent to keep an eye on.” It’s classic PR guff, but oddly familiar. Sarafa’s aesthetic might be all his own, but his language comes straight from season four of the American reality show, Project Runway, when Siriano — then 21 — claimed top prize, along the way dropping “fierce” and “hot mess” and “hot tranny mess” with absurd frequency.

Project Runway, which bills itself as “a search for the next big fashion designer”, turned Siriano into a household name, lampooned by Amy Poehler on Saturday Night Live, and featured in a cameo on Ugly Betty. But it’s what happened after he won Project Runway in 2008 that makes him an anomaly: Siriano became a bona fide fashion designer — the first and only success story from a show now entering its 15th season. This was not supposed to happen. The fashion industry is dementedly precious about entree to its gilded chambers, and not inclined to look favourably on designers who cut their teeth making gowns out of candy wrappers and stitching costumes for female wrestlers (both challenges Siriano had to master). When he applied to join the prestigious Council of Fashion Designers of America in 2011, Siriano was turned down. 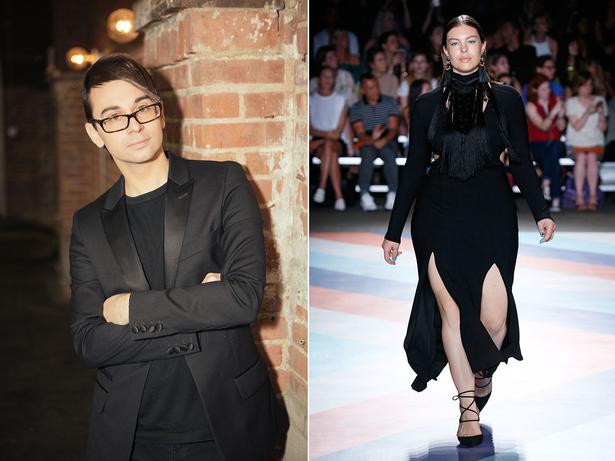 As it happens, the cold shoulder may have been a blessing, liberating the young designer from expectations and hype. Left to his own devices, he had to follow the money, designing a successful shoe line for Payless and selling some of his pieces directly from his Instagram account. This September he launched a second collection with the plus-size clothes store, Lane Bryant, making him one of the few designers who can comfortably dress his own mother. “I grew up with a mom who is a size 16, and a sister who is a size 0, so I never thought that wasn’t normal — I just assumed you had to dress everybody.”

Inclusivity, not exclusivity, is what consumers are now looking for. With celebrities like Lena Dunham and Amy Schumer skewering the industry’s notions of beauty, and identity politics at fever pitch, the more versatile and accommodating a designer can be, the better. When Siriano sent plus-size models — including New Zealand-born model Georgia Pratt — down the runway for his most recent show at New York Fashion Week, he was loudly cheered on by front row celebrities including Christina Hendricks and Pamela Anderson. It didn’t go unnoticed that his models were also diverse. Of course, other designers like Isaac Mizrahi have been advocating body diversity in fashion for years, but in these feverish times actions and words can be quickly amplified.

“Women’s empowerment in general is having a moment right now, and it’s a perfect time to put it out there,” Siriano says. Those might be principles speaking, but it’s good business, too. How many of those $995 blue cobalt dresses has he sold since Michelle Obama’s convention appearance? Siriano giggles.

When I visited Siriano at his studio, he was prepping for his SS17 show. He had a mood board covered in photos of Jackie O in Capri, his current inspiration, and the explanation for the raffia sunhats, shoes and sunglasses in orange that would shortly be gliding down his runway. Was there a name for that particular shade? “We’re calling it tangerine,” he replied. “It came from an awning umbrella stripe.”

Although he started his career as a somewhat fanciful designer, today he is in high demand for well-constructed evening and bridal wear. “We have a huge client base in Nashville,” he says at one point. He muses some more. “A lot of our business is in the Middle East, and they wear black tie to everything.”

Siriano credits his sister with inspiring him to become a designer. “She was a ballet dancer and I loved being in her world, backstage with the costumes and hair and makeup, just seeing people transform.” He recalls asking his mother to let him use her sewing machine and making a “lacy-fringed long gown”, his very first piece. “I’d never made anything, and I just figured it out.” A job at 13 as an assistant in a hair salon in his native city of Annapolis, Maryland, put him in the company of women and gay men who allowed him to be himself.

Before he started work at the salon he says his style was “very preppy”, but soon afterwards he began wearing mesh shirts and sequin pants. His parents, seeing the direction things were heading in, let him enrol at the Baltimore School for the Arts — which sounds much like being on the set of Fame every day. He says dancers really did dance on the lunch tables as part of their audition. “It’s an amazing, unbelievable place and you were surrounded [by] such talented people,” he remembers.

It’s rather charming to hear that Siriano had no idea who Vivienne Westwood was when he scored an internship with the designer while studying at the American InterContinental University in London. Nor had he heard of Alexander McQueen, who he interned with for six months after Westwood.

READ: Why Joy is Back in Fashion

“I think my second day Naomi Campbell was doing her fitting, but I didn’t know who she was,” he says. “I didn’t know who anyone was — I just knew I liked to make clothes.” Both studios, it turned out, were more creative and rewarding than working at Marc Jacobs, where he secured a paid internship after returning to the US. He quit after less than a week. “I photocopied fabric for three days in a row,” he says. “It was horrible — I never went back.”

By that stage he’d had his audition for Project Runway, and was binge-watching old episodes to work out what it was all about. “I knew about it but I hadn’t seen it because I’d been in London for four years,” he says. “We watched Sex and the City because it was what all the American students watched at the time.”

Although vindicated by his newly found acclaim, Siriano is self-evidently not the same camera-loving prima donna he seemed during Project Runway. Quietly spoken, with a tendency to start sentences that quickly trail off, he has long abandoned his signature catchphrases. Asked what advice he might now add to his 2009 book, Fierce Style: How to Be Your Most Fabulous Self, he replies, “Burn it, it’s the worst book.”

A few years ago Siriano applied again for the Council for Fashion Designers of America and was accepted, ironically in large part thanks to a recommendation from Michael Kors, one of the three Project Runway judges who appeared the season that Siriano won. It seems Runway is hard to escape.

When his publicist forwarded his bio, mention of the show was conspicuously absent. “That’s because it’s a given,” Siriano explains, not entirely convincingly. “It’s like Julia Roberts always being described as the Pretty Woman actress.” Would he be where he is now without Runway? “I don’t think it would be the same, I have to admit,” he says. “But getting the customer to come back season after season has nothing to do with anything. The clothes have to be good, that’s all it is.”