Claudia Schiffer's birthday celebrations are ongoing - online, in any case.

The German supermodel, who turned 50 last week, has been tagged in hundreds of tributes from fans and friends on Instagram.

Designers including Dolce & Gabbana and Donatella Versace have launched new products in her honour. 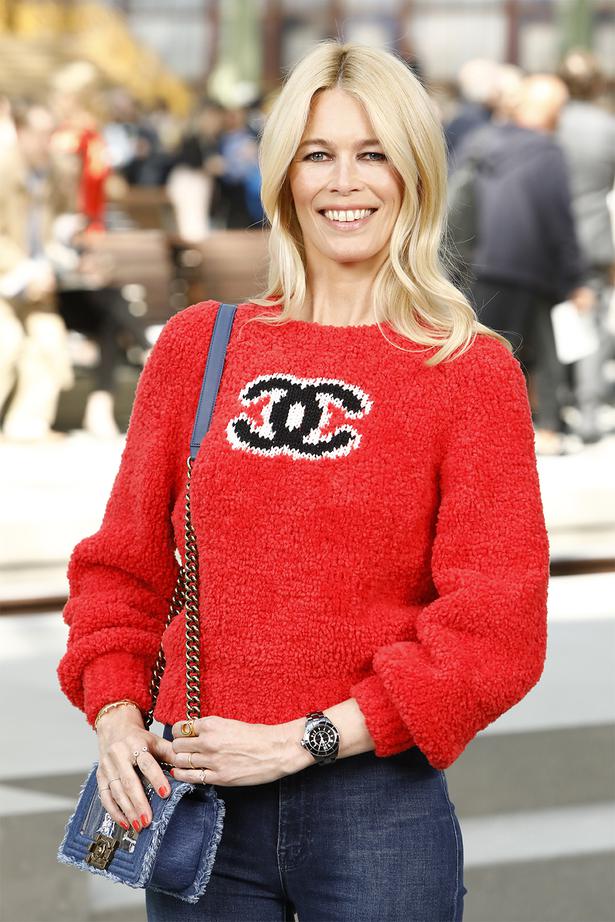 At the Chanel cruise 2020 show in May. Photo / Photo by Julien M. Hekimian for Getty Images.

What does 50 look like now? She's having dessert for breakfast in her Oxfordshire kitchen, wearing an electric blue, sheer crochet dress.

"There's a reason we have cakes on our birthdays and I feel the same way about getting older each year," Schiffer muses. "I believe you can be youthful and beautiful at any age. Personally, I have always enjoyed getting older, as it comes with more confidence.”

Schiffer is the last of the original supermodels to reach her 50s. The stars of the late 80s — Schiffer, Cindy Crawford, Helena Christensen, Christy Turlington and Naomi Campbell — are the first generation of models to work for three decades non-stop.

READ: How To Update Your Style At Every Age

The celebrity status they achieved at their peak has proved to be long-lasting, helping them to stay relevant and in demand.

But there has also been an awakening of sorts in the advertising world; women of all ages buy fashion and beauty products, and like to see themselves reflected in the media.

"I think the fashion and beauty industry increasingly understands this and is catering more for all generations," Schiffer says, noting that the industries have also expanded exponentially since she started her career in 1987, meaning there is more work than ever for all models. Schiffer is still the face of Chanel's J12 watch, decades after Karl Lagerfeld first invited her on to his catwalk.

She models and designs for Etre Cecile, Bamford, Bordallo Pinheiro and others — a supermodel can pick and choose projects and cross disciplines like the best influencers these days.

Schiffer was always the sensible supermodel — the Bardot-esque blonde bombshell with brains who had been on track to study law, like her father, until she was spotted by a scout in a Dusseldorf disco in 1987.

"I thought it was a joke," she remembers of the moment the agent approached her. "In a few weeks, I found myself in Paris and the rest is history."

Her big break came when she was cast in Ellen von Unwerth's Guess jeans campaign in 1989, launching her career in America, but the association with the denim market made it more difficult to crack the Parisian couture scene. Until Lagerfeld at Chanel took a chance on her, that was.

"Karl Lagerfeld, in particular, taught me about fashion but also about longevity in fashion," she explains. "And he made me understand the power of confidence and being yourself. Because he was one of the most powerful people in the fashion industry, for him to be supporting me — for him to be saying, 'You are the one' — that makes for an amazing seal of approval when you are very young and just finding your feet."

Unlike many 90s models, Schiffer always operated with a business-like strategy. She understood that modelling jobs could be linked, like stepping stones.

"It's important to know what you want and where you want to be," she says.

"I made a long-term plan and I never gave up. I take pride in my reputation for professionalism; working hard, being punctual, polite and disciplined are all important traits to me."

She did, however, make an exception for Versace's 2017 show, which marked 20 years since her friend, Gianni Versace, was murdered — and received a standing ovation from the typically poised fashion crowd for the effort.

She has graced more than 1000 solo magazine covers in total — apparently a world record.

Over 30 years of modelling, Schiffer has amassed a museum-worthy wardrobe.

READ: 12 Stylish People On Instagram Who Prove Age Is Irrelevant

Her day-to-day style now is more relaxed than her birthday pictures might suggest — Vogue hailed her "the original queen of school-run style", thanks to the way the paparazzi used to consistently tail her on the morning school drop-off to see what vintage flare jeans or new power blazer she was wearing.

Her eldest son, Caspar, is now 17 and daughters Clementine and Cosima are 15 and 10 respectively. She has been married to Rocketman director Matthew Vaughn since 2002.

Schiffer's supposed "mum style" is as appealing as any outfit she wore in her 20s. "I do have an extensive archive wardrobe," she explains.

"I draw on it for inspiration for my design collaborations and I still wear old favourites. I find it difficult to part with things. Each piece is a memory, so I want my daughters to wear everything that I have and it feels good to give them a legacy."

Legacy-defining items include a hand-painted Chanel bag given to her by Lagerfeld, a Versace metallic mini-dress "from one of Gianni's 90s collections" and Schiffer's bespoke Valentino wedding dress — though she doesn't get that last one out for the waiting street-style photographers.

"Denim is also a real daytime staple for me and I have a pair of dungarees, which are particularly special from the autumn-winter 1993 Chanel collection. I was photographed in them by Karl for the advertising campaign — we were shooting in Munich. We were both so happy to be back in our home country and we enjoyed eating our favourite German delicacies and trying to get the rest of the crew to partake. I remember us also using old-fashioned sayings like 'Morgenstund hat Gold im Mund' — its literal translation is, 'The morning hour has gold in its mouth.' It's one of the ways Germans stress the importance of getting up early to get a head start on the day."

Schiffer says that she is profoundly content in Oxfordshire, and relishes the fact that she can dip in and out of the glamorous fashion jobs she loves, before retreating back to the countryside with her family.

"When I started to have kids, I tried to be as healthy as possible and by doing so I feel my best today in my body and in myself overall," she says of her lifestyle.

"I work out by doing something different every day — from tennis or a yoga class, to a 15-minute abs class online or walking on the treadmill for an hour while watching a movie."

She credits a list of different organic skincare products from Bamford, as well as Epsom bath salts and the meditation app Calm as the secrets to her ageless beauty — a question which every supermodel gets asked repeatedly, no matter what their age.

But, in typical Schiffer pragmatism, there is a caveat to the response. "It's important to not be influenced by others on what beauty is," she stresses.

"I don't compare myself to anyone else. No one is perfect, everyone is different. Beauty is a subjective thing."

The latest addition to the Viva family, this inspiring new magazine is available around the country