Cleo Wade shot to fame with her Instagram poetry in 2014. Picture / Liza Voloshin When New York magazine named Cleo Wade the Millennial Oprah, it came as no surprise to her hundreds of thousands of Instagram followers. The 28-year-old artist and poet is swiftly — and stylishly — establishing herself as a voice for her generation.

When Viva spoke to her over the phone from her apartment in the East Village, New York, she’d just received an advance copy of her first book, Heart Talk: Poetic Wisdom for a Better Life, which translates her wildly popular Instagram account (currently sitting at 334,000 followers) into print form.

Launched in 2014, her posts feature bite-sized affirmations and poems that are handwritten, typed and watercoloured. “We make the world safer when we speak up” is one message, “Be kind. It shapes the world” is another.

Wade’s musings stand out at a time when feel-good fluff saturates social media. To her fans, her brand of inspirational quotes cuts through because she actively participates in the message she’s sharing, using her platform to engage in politics and supporting causes close to her heart. Being young, beautiful and effortlessly cool doesn’t hurt her cause either.

The paperback debut compiles more than 200 scrapbook-like pages of original new poems, handwritten notes and what she refers to as kitchen table conversation. “It’s the advice I would give if we were sitting together at my house talking about love and life.” The book is to be used more as a companion, she says. “You can keep it with you in the moments when you feel most alone or heartbroken or confused.” Right before she went to print, she decided to make tiny notes in the margins of her favourite pages, encouraging her readers to do the same.

“I wanted to write something to inspire little shifts needed to make a bigger impact,” says Wade of her broader intention for Heart Talk. “Life is so overwhelming. People are just looking for these ‘press pause’ moments so they can go on with their day, without being in a constant state of fear or exhaustion.”

Self-care is an important theme of her work, although she’s quick to point out it takes more than a few mantras. “It is a practice. It is something you work on. We live in a time where people are selling or telling you what to do for self-care but it’s different for everyone.” Even the relentlessly positive Wade admits to having bad days. “There’s no shame in that. We shouldn’t think that there’s too much for us to do to not have the luxury of feelings. If we don’t feel our feelings and have self-care then we are in a constant reactive state.”

While her lifestyle may be aided by social media, which means promoting and modelling for brands such as Nike, Ugg and Armani one day, and hosting dinners for the likes of Jimmy Choo the next, it’s activism that forms a large part of Wade’s personal brand. She is a regular contributor to W magazine and Teen Vogue, and the New York Times recently featured a new poem of hers, which prompted people to get involved in their community. At TedWomen last year, she delivered a speech on choosing love and acceptance in a time when both seem in short supply, leaving her audience with the takeaway: “The world will say to you, ‘Be a better person’. Do not be afraid to say, ‘Yes’.”

Femininity and feminism are topics she frequently talks about but says they’re only one part of her message. Race and the LGBTQI+ community, among other issues, are addressed too. “Gloria Steinem said it best: Issues are linked and not ranked. We don’t live single issues. We can’t have single issue conversations.” For anyone that has the privilege of a voice, Wade says give it to those not being heard. “I think leadership doesn’t come from a space of talking about yourself. Leadership comes from a space of letting everyone else share their stories. In my poetry, I try to tell those stories that are being overlooked.”

The New Orleans native has been heavily influenced by her mother and father. Wade’s mother, a chef, would invite girlfriends around after work to sip wine and talk late into the evening. “Those are my earliest memories of her. Always being surrounded by a tribe of women,” she says. “To learn the value of that so young has been crucial to everything I build now as a woman in my life.” She credits her father, a photographer, with her compassionate nature — and her love of fashion. “He is, like…style. He wears a three-piece suit, tie and sunglasses every day.” Wade says being raised by such free-spirited parents was central to who she is today, along with her colourful and extraverted upbringing in New Orleans. “The city really was my third parent. It’s such a vibrant and expressive place. Everyone comes together to dance in the streets.”

Her interest in writing was first sparked at age five after a summer camp about poetry. She’s since used words to navigate life and connect with others. “When someone names something that is going on inside of you, we realise our experiences are shared. You are able to identify and heal.” The move to New York after high school was an obvious one for Wade, who dreamed of pursuing a career in fashion. “It was the most daring and brave decision I ever made,” she says. A few years later she was drawn back to her typewriter and notebooks and launched her Instagram. “The rest,” she says, “is kind of history.”

Her achievements so far are something she could never have imagined as a young girl growing up in Louisiana. And labels “Instagram poet” have an effect, she says. “I don’t know that I ever deserved the expectations of being a poet in 2018. It wasn’t something that anyone thought I could do. It was a string of my girlfriends that told me I could. That true belief in myself made me feel it was even possible.” The New Orleans native tries to tell stories that are being overlooked. Picture / Liza Voloshin

As Wade’s profile grows — she sits front row at fashion shows and pops up in Vogue and Page Six — the limelight has inevitably attracted sceptics. Any critics, however, are shrugged off. “Whether it’s positive or negative, at the end of every day I just put my head down and do the work. If the highs mean everything to you then one nitpicking comment will make you feel like you can’t go on. It’s just a slippery slope, so I stay off it all together.”

Wade says she’s not the media maven people assume she is. “I literally just take a photo of my notebook, put a black and white filter on it, up the contrast and I’m out the door.” She chooses Instagram for its visual aesthetic but surprisingly stays clear of using it for anything else, along with all other social media. “It’s a function for me rather than a distraction. Social media is not a space where I would go to feel lesser than, or that I wasn’t doing enough. All the things that I think people really struggle with on the platform.”

Wade’s sense of self is clear and desirable — a little piece of wisdom she wrote for Heart Talk is always in her mind: “Don’t wait on anybody to tell you what you’re worth. Be the first one in the room to know your value.” 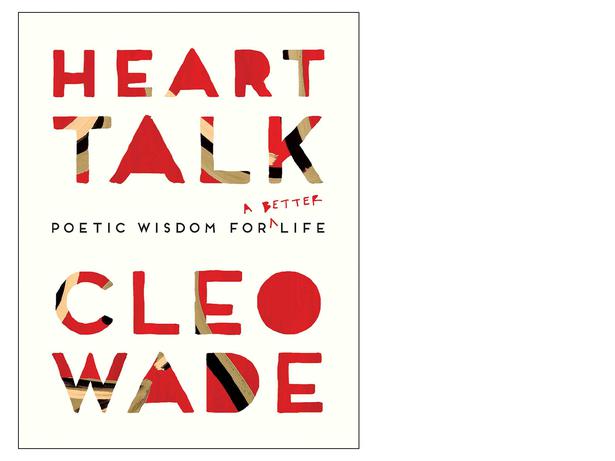