Would you Wear a Corset? They were a staple garment of the Victorian upper classes, and seen by some as a symbol of an oppressive desire to control and stifle the female form to suit the male gaze. But more than a century later, corsets are making a comeback, suiting the spirit of a very different age.

Reclaimed most notably by high fashion’s feminist designer Miuccia Prada, as part of her Fall 2016 collection last year, corsets have become the biggest look in the street-style universe this season. Punk, of course, got here first in the 1970s, with its overtly sexual — and anti-establishment — take, as Vivienne Westwood famously brought corsets to the runway. And when Madonna wore a Jean-Paul Gaultier conical-busted corset on her 1990 Blond Ambition tour, she was making a case for it as a symbol of female sexual empowerment.

What feels new and potentially feminist about some of the current corset variations is their lack of adherence to traditional ideals of the female form, to “sexiness”, or any notion of what the so-called male gaze might usually choose to linger on.

Kim Kardashian was an early adopter: she was most recently spotted wearing a corset teamed with tracksuit bottoms and a puffer jacket. Now they have reached the high street, too — stocked from Glassons to Witchery, Zara and Topshop. Local designers including Georgia Alice and Ruby have featured corsets or corset style belts in recent collections. And they are big business. Sian Ryan, head of design at Asos, says recent sales have been “amazing”, with the corset belt proving particularly popular.

It may seem an unlikely trend, especially given the current spotlight on feminism, both on and off the catwalk, but this last bastion of fashion is undergoing a very modern retelling. Designers aren’t doing the whole whale-boned thing, but corset belts, T-shirts with corsets overlaid, shirts with corset lacing, or those awful 1990s corset bags we thought were long gone, are very much in. Garments such as Kitri’s lace-up-sleeve shirts are playing with the look, if not the cinching. And Rihanna’s Fenty x Puma collection features pink trousers with laced-up slits down the side, another nod to the corsetry aesthetic. 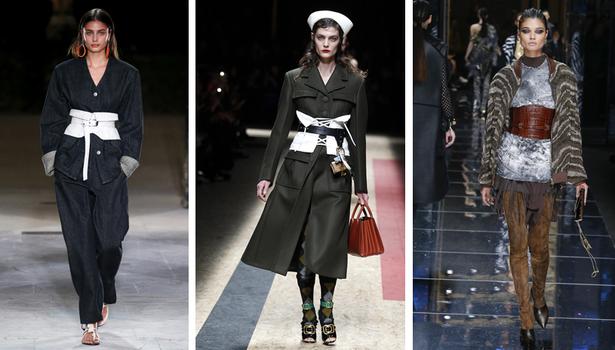 The new corset on the runway, at Isabel Marant, Prada and Balmain. Pictures / Getty, Supplied

But can the garment ever fully shake off its patriarchal trappings? It seems unlikely. However, as with the reclamation of pink by modern feminism, might it be possible for the symbolism of the corset to be subverted and given a more feminist-friendly narrative?

Valerie Steele, a fashion historian and author of The Corset: A Cultural History, thinks it can: “The meaning of any item of clothing is not embedded in the clothing itself; it’s something we create and are constantly renegotiating.”

But for the corset to come to represent something other than fainting Victorians will take a powerful rebranding. Kardashian-esque waist-training aside, the rigid, rib-crunching undergarment of the 18th and 19th centuries has given way to softer fabrics and looser fits. Street-style star Natasha Goldenberg wears hers on a sweater or over a dress or fitted coat.

Sofie Valkiers wears hers over black leather or a gingham dress, or pairs it “with a simple turtleneck and cropped trousers”. Valkiers says what first attracted her to the corset was a very modern preoccupation. “The trend is perfect for adding a sophisticated touch to oversized clothes.”

Corsets fit, loosely, with the shape that has dominated the catwalks this season — a sort of softened hourglass, where waists can be fitted but are certainly not cinched. At the Prada Fall 2016 show that jump-started fashion’s current fascination, fabric corset belts were worn over chunky overcoats, or wonky and loosely laced adorning oversized shirts.

Madonna’s version was a distant cousin of the garment designed “to be respectable or look upper class”, says Steele. “It was seen as a kind of defiant wearing of taboo clothes … It was sort of saying f*** you, I’m a sexual being.”

Of course, one person’s two fingers up to the patriarchy is another’s “pandering to male sexual fantasies”. But underwear as outerwear caught on and grew to be something as likely to be seen in your local shopping centre as on stage.

Some of this season’s street-style stars are keenly aware of the corset’s “sexy” side. There is, says Goldenberg, “nothing sexier”. And yet it was Prada’s almost anti-sexy version that inspired her to wear it. “When Miuccia Prada showed us how to wear the sexiest thing in all of fashion history with socks, chunky sweaters, big coats and massive boots — that’s when I fell in love with it.”

And for Steele, it boils down to choice. From Madonna’s raunch to Prada’s more reined-in approach. “The point is that it’s not something that others are deciding for us any more.

“You don’t have the pressure of society, or your mum, or grandma saying you’ve got to wear a corset or people will be shocked. It’s like, I’m doing this myself — say it’s a mistake if you want, but it’s my choice.”

See every look from the latest Prada menswear show in Milan

The Return of Sexy Dressing

From figure-hugging corsets to sensual slips, the definition of sexy is open for interpretation

View More
Christmas Gift Guide: The Best Gourmet Gifts For Food-Lovers
Christmas Gift Guide: The Best Presents For The Conscious Shopper
Christmas Gift Guide: The Best Investment Pieces For The Discerning Shopper
20 Tableware Pieces For Stylish Holiday Entertaining
Park Yourself Outdoors With These Lovely Picnic Essentials
6 Local Makers To Have On Your Fashion Radar
15 Looks From London Fashion Week That Brought The Drama
22 Looks From New York Fashion Week That Made Us Swoon
The Coolest Red Carpet Looks At The Emmy Awards 2021
The Coolest Looks From The Met Gala 2021
Everything We’ll Be Adding To Cart When Charlotte Tilbury Makeup Arrives In Aotearoa
The Coolest Met Gala Looks of All Time
From Pistachio To Sage: Crisp Green Looks For Dopamine Dressing
Cushy Hoodies, Jumpers & Trackpants To #StayHome In Style
A Star Is Born: Cinematic Hairstyles To Try At Home
The Latest Looks From Copenhagen Fashion Week
12 Stunning Raincoats To Keep The Rain At Bay
16 Great Cardigans For The Changing Seasons
Strut Your Stuff With These Sensational Winter Boots
Looking Back At Miss Crabb's Greatest Hits
16 Cosy Accessories To Help You Stay Warm This Winter
iD International Emerging Designer Awards 2021: Meet Your 43 Finalists
Cosy Coats, Bags & Boots For Every Occasion
Our Favourite Looks From London Fashion Week Autumn/Winter 2021
Vivienne Westwood's Sweatshop-Free Stitches
The Coolest Looks from the SAG Awards 2018
The Coolest Looks from the SAG Awards Red Carpet 2019
The Coolest Red Carpet Looks At The Grammy Awards 2021
Playful Autumn Fashion That Pays Homage To The Glamorous 1920s
The Coolest Looks From The MTV Video Music Awards 2020
Every Look From Prada Menswear Autumn/Winter 2021 (And Everything We Loved The Most)
Every Look From Prada's Spring/Summer 2021 Collection
New Zealand Herald