Behind the scenes during the filming of 'Cousins'. Photo / Supplied

Sacha Teuila Young is fast becoming one of Aotearoa’s leading costume designers for film and television. With an extensive CV across commercial, editorial, video and television projects (including as a finalist for Best Costume Design for her work on 2019’s Dancing with the Stars), her foray into film is remarkably very recent; first as a costume supervisor on the comedic hit The Breaker Upperers (2017) and then as the designer on 2019’s Baby Done.

Since then, Sacha has been in high demand; landing the costume designer role on the acclaimed new feature film Cousins as well as a host of new productions in the wings. Ensemble can attest that she’s also one of the nicest people working in fashion.

Following on from her conversation with the film’s co-directors Ainsley Gardiner and Briar Grace Smith, Litia Tuiburelevu spoke to Sacha about her experience working on Cousins, the significance of fashion to enrich visual storytelling and her advice to budding costume designers.

Litia: Firstly, a big congratulations for your work on Cousins. It’s an incredible film and obviously the costume plays such a significant role in telling each character’s story. Could you tell me about how you came to be the costume designer?

Sacha: I’ve been in various costume related roles for the past seven or so years, and more recently came into doing costume supervisor and design work for film. I worked as a costume supervisor on the New Zealand comedy The Breaker Upperers [also starring Cousins actor Ana Scotney and co-produced by Cousins' co-director Ainsley Gardiner] and then Baby Done, which were both contemporary in a fashion sense.

After that, my name was put forward to be the costume designer on Cousins (filmed in 2019, released 2021). Sacha hanging out in one of the most important things for any costume designer: the costume van. Photo / Supplied

At the time I was working as the Head of Costume on Dancing with the Stars so it was a very full-on time in my life given the turnaround for game-show television.

Part of the job ‘application’, I guess you could call it, was presenting Briar and Ainsley with a vision board. I had a very small window of time to put the vision board together, but I had such a strong idea of how I wanted to approach the project that I got it done and, thankfully, was selected!

Litia: Could you explain your thought process for that, and where you sourced your inspiration?

Sacha: As part of the application I was sent a copy of Briar’s script to work from. I was immediately taken by the story. In fact, the first time I read it I was brought to tears. I literally had, like, a physical reaction to the material.

Although I’m Sāmoan and Cousins is specifically a Māori story, it still resonated at a deeply human level. There’s a real sadness to it but simultaneously hope and triumph. It’s an incredibly special story, especially knowing its history from the novel to the screen. ?

Litia: What images were on your vision board?

Sacha: The structure is oriented around the three cousins in the film — Mata, Makareta and Missy — and how I could visually channel their individual stories through costume.

From reading the script, I envisioned each character as a natural element. Makareta as earth, Mata as water and Missy as fire. That was the starting point for the colours, textures and outfits to draw from.

I selected the various images from contemporary fashion magazines and runway shows, as well archival photos of Māori post WWII. These were anchored by images of nature. 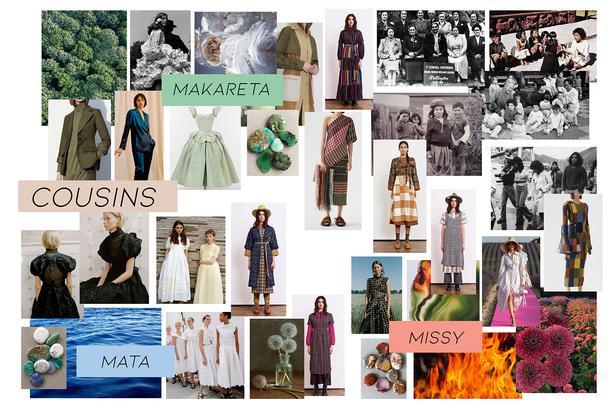 Sacha's original vision board for the costumes in 'Cousins'. Photo / Supplied

The natural elements informed the key colours for each character; deep green, blues and reds/oranges as which also worked as quick visual clues for the audience.

We were very intentional about signposting where we were in the story given the film jumps between timelines and doesn’t subtitle what decade it’s in. The vision board really carried me throughout the entire filming process.

Litia: When it came to actually pulling the looks together, did you and your team make them from scratch or hire them out?

Sacha: Given the size of the cast, the costume team was actually very small. There wasn’t a huge amount of lead up time and once principal production began it was all go. The team (Sally Gray, Margi Drodrolagi and Lucy Cuthbert) and I would try to source, hire and buy as much as we could.

Some of the more significant costumes — such as the red, blue and green dresses worn by the three young cousins in the opening scene — were handmade.

Ainsley and Briar had a clear vision for certain costume elements, too, such as Mata’s green coat that we see across the film.

I was so grateful for my wonderful team and their expertise in sourcing various period pieces. This was my first ‘period’ drama as I’ve worked predominantly on contemporary film and television projects. Sally knew the Wellington scene really well and was the ‘go-to’ for sourcing various looks. We also hired several period pieces from Wanganui’s Amdram theatre — it was cool to support local business.

Litia: The lush cinematography, courtesy of Director of Photography Raymond Edwards, really brought the costumes to life. How did it feel seeing your work on screen for the first time?

Sacha: Raymond was incredible to work with. We were both the same age at the time of shooting and it was almost like we were the young kids on the block. Even so, it was great how much the directors trusted us with our roles. 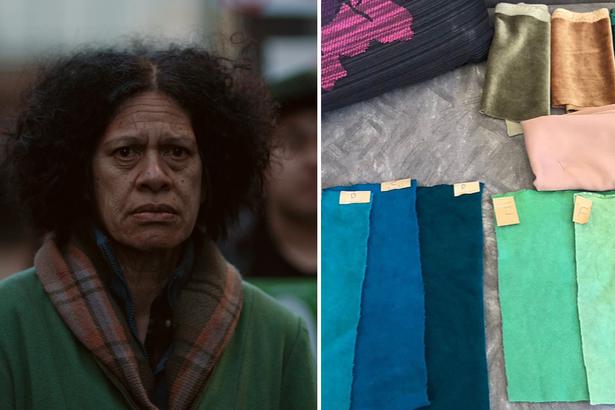 Swatches from Mata’s green coat (left), and the coat featured in the film. Photos / Supplied

I wasn’t physically on set during the shoots so I’d have to watch the rushes (the unedited, raw visual and sound footage from the day's shooting) at the end of each day. Even though I was viewing the raw footage, I was in awe of how the story was being captured. It’s really a testament to both Raymond and the directors’ abilities.

Litia: Did you have any favourite looks from the film?

Sacha: The team had so much fun pulling the outfits together to help tell each character’s story. It was great working on a project that spanned different decades allowing the opportunity to source different looks and do something different with the cast.

For me, I loved working on Makareta’s look when she was a 20-something law student at University in the 1970s. She really embodied that ‘mod’ look with her A-line midi dresses, gloves, head scarves and bold patterns. It was a cool and exciting era both for fashion and indigenous activism.

Sally also had a lot of fun with Mrs. Parkinson (Mata’s caregiver), using costume to emphasise her menacing, overbearing nature.

Litia: Any advice for budding costume designers wanting to work in the film and television industry?

Sacha: It might sound a bit cliche, but like any job, experience is essential. I’d advise reaching out to those working in the industry and trying to make connections in any way you can. Thankfully New Zealand is a small place where everyone kinda knows everyone. Behind the scenes during the filming of 'Cousins'. Photo / Supplied

Don’t be scared to cold call, cold email, or cold message someone! There are actually so many opportunities once you put yourself out there, just starting with smaller projects and working your way up.

Litia: Having now worked on Cousins, and with a slew of other film and television projects in the works, do you have a dream costume job?

Sacha: I’m really enjoying the different opportunities I’ve gotten with film and television since working on Cousins. I really enjoy the challenge of contemporary fashion and finding new ways to bring characters to life through costume.

I don’t have a ‘dream project’ per se, I just want to be involved in anything that has a quality story behind it. Like on Head High for example (now in production for season 2) I’m getting to work on a story where we’re seeing a brown family as the leads for a prime-time New Zealand drama.

Cousins will always be such a special experience for me. The cast, crew and my team are all amazing. It was a beautiful opportunity.

The 1991 jam was a plea to 'Akona Te Reo', or learn the language, with a music video featuring early 90s NZ fashion