From punk and grunge to the red carpet, the designer talks about the evolution of this iconic English brand For me it was the 90s. I lived in a squat in London, was going to see lots of bands and working in the music industry. Dr. Martens were my footwear of choice.

They worked perfectly with my wardrobe (sourced mainly from Camden Market — did I say it was the 90s and grunge ruled?); they were perfect for tramping around the dirty streets and holding my ground on the Tube.

I went through many incarnations of shoes and eight-hole boots (anything higher was far too staunch), loving the innate sense of rebel they brought to a young woman trying to find her identity far from home. They captured a time and spirit in my life that I will always treasure.

For the brand’s new global creative director, Darren McKoy, it was growing up in Sheffield, the north England city he describes as predominantly working class, where football and music were the subcultures that reigned supreme.

“Being from a Black Caribbean family,” he explains down the phone from his London home, “there was always gospel church music and then later ska and reggae. And I played a lot of football. So in terms of subcultures and connectivity, these were important to me getting into the fashion scene."

"My first Dr. Martens were actually school shoes. You know, that working-class mentality where you buy shoes that will last. That was my mum. Also, one of my uncles was a skinhead, so he wore DMs as well.”

Darren’s love of music and football and being part of the local club scene led to his first jobs working in retail, where he developed a growing curiosity around product design and development. It went on to study retail marketing and management at nearby Leeds.

From there he has never looked back. His career has been on a trajectory working for global brands such as Adidas (Originals), The North Face (Off-Mountain) and Asics Tiger Onitsuka. In 2015 he joined Dr. Martens, where he has developed and acted on a philosophy: “Make good stuff, evoke an emotional response, respect brand heritage.”

When the brand celebrated its 60th anniversary, he was part of the 1460 Remastered Collection which included 12 collaborations with leading streetwear brands and fashion designers including Raf Simons and Marc Jacobs. 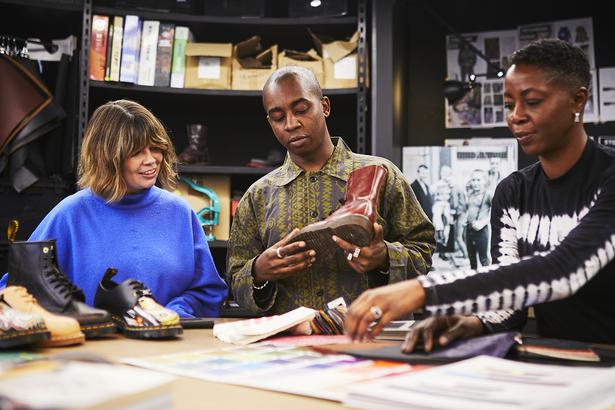 In 2015 Darren joined Dr. Martens, where he has developed and acted on a philosophy: “Make good stuff, evoke an emotional response, respect brand heritage.”Photo / Supplied

Coming from a product design background, he is not your typical creative director. When it comes to designing footwear for a global market there is a lot to consider.

“We look at consumer targets and we look at the creative muses or the tribes that have adopted the brand over the years. We’ve crossed many different decades of rebellious self-expression. We have all these cultural touchpoints, which is quite unique, and the key is to keep evolving and connecting with new people, with new collections.”

Staying ahead of the game is paramount. Darren or “DMac”, as he is known, has spent the day with his immediate team working on their creative strategy for 2024.

“It was an intense session. The focus is all about evolution, so it’s about coming up with the framework and the ideology and making sure we align. It’s about keeping an open forum. It was a really productive day.”

With borders now open for travel Darren plans to visit and engage with different markets around the world – from Paris to the States to Asia – and be on the constant lookout for inspiration.

Reading, listening to music, connecting with subcultures, hanging out with friends and colleagues all feed his creativity.

And, as with all modern brands, collaborations are key. For its latest release this week, Dr. Martens has combined its London vibes with Pleasures, an LA streetwear brand renowned for its musical connections from 70s punk to 90s Riot Grrrl.

The designers have riffed on the slacker grunge vibe of the 90s by turning a shoe into a relaxed and comfy slide with a slingback.

“Whether it’s sandals for summer or boots for winter, it’s all about spinning the icons in a new way and incorporating the designs with new technologies and innovations.”

Lit Knits: 6 Local Designers Fashioning Some Of Our Most Beloved Autumn Woollens

She cut her teeth at Proenza Schouler and Tory Burch. Now she makes shirts and shoes everyone wants

Meet The Footballer Behind This Billion-Dollar Footwear Brand