Anya Hindmarch, founder of the eponymous luxury handbag brand, tells Graham Ruddick that the new chief executive — a Kiwi — has paved the way for growth — and family time.

Imagine running your own business for 25 years and then deciding that actually the best way to grow it was to fire yourself. That is what Anya Hindmarch did.

The fashion designer founded her own business at the age of 19 in 1987 after she discovered a leather bag she liked on a trip to Italy. She was inspired to launch her own range of accessories and opened a store on the first floor of a building in Walton St in Kensington and Chelsea.

Her brand then became one of the most established luxury names in the UK, with handbags renowned for their quirkiness and also their quality.

However, in 2011, she reached a tipping point. Hindmarch decided that if her company was going to become more than a niche handbag brand, she needed help.

So she fired herself as chief executive and brought in Kiwi James McArthur, who used to run Harrods and was a vice-president at Gucci, to run the company.

"It was a really big deal for me," she recalls at her company's offices in Battersea. "It was something I thought long and hard about, but I got to the point where I really needed it. I remember sitting at lunch on a Sunday with my children incredibly keen to see me. I was so panicky about the idea of going to lunch because I was trying to catch up for the week. That is not healthy for anyone. It was getting too much.

"It was important for me to find someone with similar values. James is a father of four and understands about managing people."

McArthur, who is sitting beside Hindmarch, adds: "It was an incredibly brave move."

With McArthur appointed chief executive, Hindmarch became chairman and was able to focus on her role as chief creative officer. "We got to a stage where we had 56, 58 stores, when I felt it was time to make a change," she adds.

"I was spread quite thinly over the creative role, which I started with and loved, but also running the business role, which I also love.

"I was trying to decide which way to go, but ultimately I am not an expert at growing a business and actually the creative role is not as easy to fill. So I made the big decision to fire myself and to hire a very seasoned pro."

One of the first decisions Hindmarch and McArthur oversaw was the sale of a minority stake in the business to private Qatari investors. Mayhoola For Investment now owns just over 38 per cent of Anya Hindmarch, although the founder still owns the majority of the shares.

Hindmarch and McArthur are driving through a "replumbing" of the business, with investment in IT and technology, and have agreed to take full control of Anya Hindmarch in Japan, which had been run by franchisees. This was a significant move because Japan accounts for 35 per cent of Anya Hindmarch sales. "The idea of taking back Japan, with me doing the creative and chief executive role, would have been beyond my bandwidth," Hindmarch says. 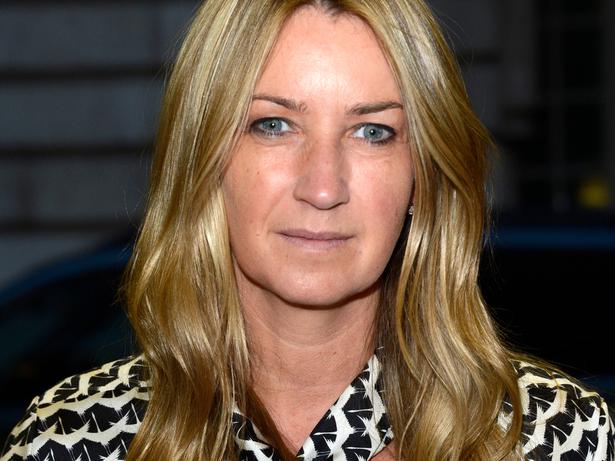 The changes at Anya Hindmarch provide an interesting comparison with events at Burberry, where Christopher Bailey has assumed the chief executive and chief creative officer roles. The FTSE 100 company suffered a revolt by shareholders about how much it was paying Bailey, and the City is uneasy about his dual role.

"He is a really good friend of mine," says Hindmarch. "I think he is absolutely brilliant and I am going to say no more on the matter."

It is clear, however, that Hindmarch, who has five children, now feels she has more time on her hands to focus on the creative aspect of the business.

Whereas McArthur arrives in the office at 7am to get started on the business issues, Hindmarch is, in her own words, still eating porridge at home.

On the creative aspect of her role, she states: "I was on it 100 per cent before and I am probably on it 150 per cent now if that makes sense.

"That has always been my first love. It's fair to say I never took my eye off the ball, I couldn't. But I think the fact is that we are spread over lots of different countries and trying to get into the corners of all those places is really hard. It's enabled me to spend more time there. It gives us more manpower."

The fashion world believes Hindmarch is now producing some of her finest work.
Items in her new collection have already sold out three times over before their official launch, prompting company meetings about how to boost supplies.

Recent highlights for Hindmarch have included bags featuring the logos of food brands, such as Tony the Tiger from Kellogg's Frosties, and a metal bag, based on a packet of crisps, that is priced at £995 ($1970).

Despite her achievements, Hindmarch is disarmingly self-deprecating.

"It sounds childish, my work doesn't it?" she says after describing the metal bag.

"It is really complicated to make. We wanted to do a bag that was quite simple, modern art and was a take on a crisp packet. It is a really complex bit of engineering. You have to photograph it and 3D model it and then you make the mould - 10 different moulds per bag."

The bag has proved a big hit, literally. It reached headlines around the world after the sister of singer Beyonce was caught on CCTV hitting the singer's husband Jay-Z with it.

"That is the actual bag," says McArthur, pointing to the gold version on the table that Hindmarch has been using as a prop.

"That's probably why it's a little broken then," the designer replies, checking it over.

"I am not very excited by celebrities. It's the craftsmen who drive me, they are the absolute celebrities in my book. But of course it makes it reasonably iconic."

These days Hindmarch herself is a celebrity. She was awarded an MBE in 2009 and is a role model for women looking to break into business.

Hindmarch launched her business despite being dyslexic and having not been particularly academic at school.

"Role model is a terrifying thought ... I think I need to be more grown up for that," she says.

"But in terms of inspiring people to start businesses, I really care about business, the arts, and the creative industries, which I think traditionally have been maligned. I think now there is much more of a voice. We are talking about the creative industries being a really serious sector. It is not just frilly, it is proper nuts-and-bolts business."

Hindmarch offers advice to other female entrepreneurs through her position as a non-executive director of the British Fashion Council.

"I think being an entrepreneur and being a woman is a nice natural fit. You tend to get a lot of female entrepreneurs because you can be flexible with your time and work late and sort out children from school if you need to.

"I think women in traditional sectors have found it really hard. You can't pretend you are a man. You can't miss a carol concert. These are important things to do."

Hindmarch, however, is firmly against the idea of quotas to boost the number of women on FTSE boards.

"As a woman, I would be really frustrated to be picked for a job just because I wore a skirt. That would be deeply annoying."

Hindmarch has been known to engage with the political world. She is a trade ambassador for the Government, but has also donated to the Conservatives in the past and hosted a fundraiser in 2008.

However, despite a general election looming, she says there are no plans to do the same again.

"It's not something I particularly want to linger on," Hindmarch says, appearing agitated for the first time. "It is not something that I think is relevant to what we are talking about. But [the reason for not being involved] is simply just bandwidth, being spread so thinly."

Hindmarch may not have the time to help the Conservatives anymore, but her company is certainly reaping the benefits of its founder spending more time on developing metal crisp packets.