Azure skies, terracotta rooftops, sun-kissed buildings — the rural township of Felguerias on the outskirts of the Porto district in Portugal may be several thousand kilometres from Auckland, but it’s here Kiwi menswear designer Samuel Hickey settled on the production for his new menswear brand Samuel Joseph, debuting today with a focus on the perfect linen shirt proudly designed in New Zealand.

After spending two years in London working as a product developer at menswear lifestyle brand Original Penguin (the brand sits under the Perry Ellis International umbrella alongside other menswear stalwarts such as Farah Menswear and Callaway Golf), Samuel’s return home to launch his brand, alongside brother and business partner Noah Hickey, was an easy decision to make. “I wouldn’t really consider starting elsewhere,” the 28-year-old says.

“New Zealand has so much going on, and it’s great to come home and connect with friends and family.”

With roots firmly here, sourcing the right factory to bring his designs to life proved challenging, Samuel looked all over the world for a factory that shared his values of quality craftsmanship.

“After talking to some of my ex-colleagues back in London, we knew some good contacts for shirts in Portugal, and I ended up contacting about four factories. The one I am now using blew me away; they really understand the business of making quality shirts. My contact on the ground is also a third generation in the family-run business, and I knew immediately I could rely on them.”

Samuel’s own experience working as a designer for Huffer prior to living in the UK was another pivotal moment in his career, having been hired straight out of graduating from a degree in fashion design at AUT in 2010 — a degree his father David is currently studying. 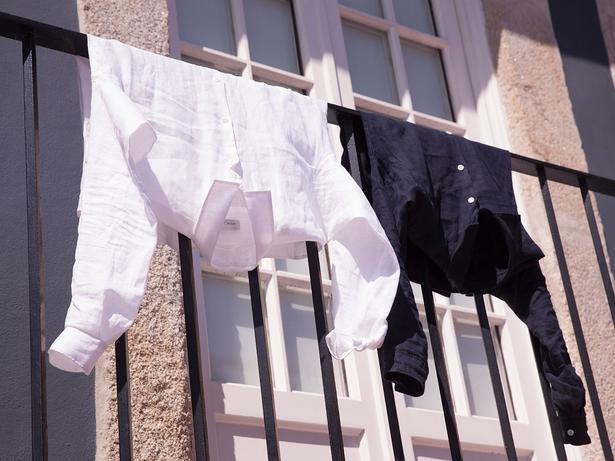 “It’s pretty cool to see Dad follow in my footsteps,” says Samuel, laughing. “He loves it. Growing up, there was always a sewing machine set up at home. My parents still have quite a cool studio.

Although I don’t necessarily reflect on it, in some way subconsciously, being surrounded by that has given me the drive to go and make it myself.”

As consumers are being bombarded daily with new product from brands, Samuel is one of a new wave of designers looking to slow the pace by zeroing in on one product offering and doing it well, before branching out into other categories.

“I gained all this amazing experience in London, and I got to see different structures, ways of distribution, licensing. All these components opened my eyes to how men like to shop,” he says.

“I’d be looking at various reports each month and would see the behavioural patterns of how men like to buy clothes. Guys like to purchase the same thing but in different variation whether it was a new fabric or colour. The simpler product sold really well, and it drove me to question how I like to shop and dress, and interpret that in my own way.”

Inspiration also came from the effort made by the standards of dress Samuel observed in Europe. “What I noticed about UK men in particular, was they made an effort to dress up, grooming also a key part of their daily routine,” he says.

“You’d see a builder with a clean fade barber’s cut or kids down the street wearing full Palace and Supreme skatewear with their hair done — they’d all make an effort to embody the culture they identified with. I found that really inspiring, and while you wouldn’t necessarily see that here, it was good for me to see and prompted me to think outside the box when it came to what I wanted Samuel Joseph to represent.”

“It’s not normally a colour I’d usually wear but it’s had so much great feedback already.” The colours also lend themselves to versatility and aren’t restricted to gender, a reflection on the changing way men and women are dressing right now.

The brand is also setting the agenda from the beginning with a sleek website housing the first collection, and a film to mark the launch directed by friend and creative Tim Lambourne, which chronicles the shirt-making process in Felguerias.

This sits alongside a carefully curated social media presence run by the designer himself. “I wanted to keep it as organic as possible, and I like to think it captures the life of who Samuel Joseph is. Rolling out a film like this helps convey that message quicker.”

• The Samuel Joseph collection is available from today from Samueljoseph.co.nz, and is available to purchase at a one-day pop-up shop tomorrow, at 1 Cascade St, Freemans Bay.

Printed T-shirts to Shop for Spring

Whether it’s a smart quip or pop-art print, wear your heart on your sleeve with spring’s medley of printed T-shirt...