In the old days - six months ago - Paris couture unfolded twice a year in the pomp and gilt of Parisian mansions, hotels and, in the summer season, embassy gardens or the parks of museums that had been closed to the public for the day. Access was tightly controlled - big-spending clients who had been vetted by the individual houses to ensure they weren’t too obviously linked to criminal activities, and influential media outlets with the “right“profile.

This time it all happened on a screen near you and everyone was invited.

Students of fashion would have recognised that the inspiration for these dolls came from the 18th century when mannequins de mode were dispatched from Paris to the courts of Europe. Before the introduction of the catwalk in the Thirties, this was how the super-rich saw previews. 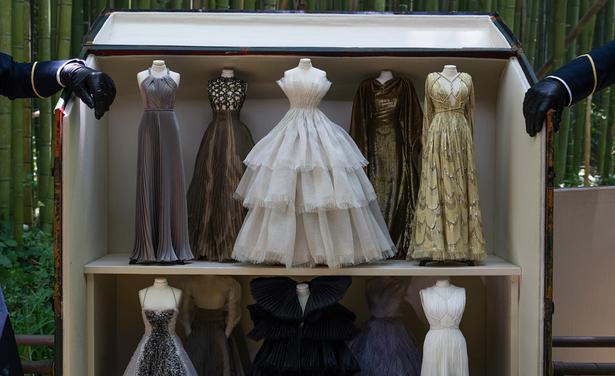 The doll idea was brought to life again in 1944, by a cohort of French designers intent on reviving the nation’s luxury fashion, after Paris was liberated. Their inclusion in Dior’s 15-minute online film was an inspired addition, creating a reassuring sense of continuity stretching back several centuries.

It isn’t easy communicating the unique, intimate appeal of couture, which takes months to make, on a digital platform destined to be consumed in minutes on a laptop or smartphone, particularly when so much of couture’s allure is about construction and what’s inside a piece of clothing.

But in just a few seconds, Dior’s film, made by the Palme d’Or winning auteur Matteo Garrone, gave a compelling account of the skill and dedication behind each item, while simultaneously providing an entertaining if weird romp with mermaids and nymphs.

Ralph and Russo, the Mayfair-based couture house designed by Australian Tamara Ralph, also produced a film that zeroed in on workmanship and Ralph’s painstaking illustrations, before segueing to the finished frocks. I’m not sure what the point of their avatar was - a computer-generated woman, who was conveniently very thin - other than to signal something vaguely futuristic.

But the billowing clouds of lilac and pink tulle were perfect for the digital world and the footage of masked make-up artists working with the models provided some interesting context that will be lapped up by future fashion historians.

Meanwhile, Julie de Libran, who until recently worked hard to modernise the ready to wear legend of Sonia Rykiel before its owners shut up shop, used this experimental fashion “week” to launch a modern-sounding couture project using dead-stock and left-over exquisite fabrics. Her film showed fragments of her creative life, which worked well, but it would have been good to see more of her clothes.

Alexis Mabille made the opposite error - attempting to graft a traditional catwalk experience on to film, which never works, even when the background is fuchsia.

Chanel also took a misstep, not with the clothes but with a blink-and-you’ve missed it film, horribly soundtracked, that failed to provide any backstory or context and left its audience with the distinct impression it’s not interested in challenging the status quo - unlike Viktor and Rolf’s witty presentation.

The latter’s film probably featured my least favourite clothes of the week - ball gowns embellished with what looked like M4 traffic cones. But it didn’t matter. The cod- Forties announcer with his tongue-in-cheek observations made me smile.

Until technology finds a way for us to touch clothes and see them in 3D, digital is self-evidently no substitute for a live show. But for those willing to push and prod its limitations, collaborate with exciting filmmakers and writers and address the here and now, it’s a way of directly reaching millions - fashion’s equivalent of printing the Bible in the vernacular rather than Latin, thereby bypassing the priests. Maybe this is the start of its long-awaited reformation.

As the fashion event adapts to global changes, we take a closer look at what to expect from this year's prestigious awards