Let’s face it, 1950s values are the antithesis of woke. That’s a potential minefield for certain brands — from James Bond and the Eames office chair; The Archers to Dior.

These are all ongoing entities striving to seem relevant and modern, because that’s what you do, without turning their backs on their own valuable heritage, because that’s also what you do. Dammit, it’s the history that fans so often secretly (and not so secretly) thrill to.

Take Dior’s wasp waists and full skirts. The so-called New Look debuted in 1947 but shaped, literally, the next decade’s fashion. For every designer who’s been in charge there since Christian Dior died in 1957, has found themselves entranced by the archives, but also tortured by the need to keep moving the brand’s aesthetic on.

“Honestly, for me, when I look at Dior pictures from the 1950s it’s not always the clothes that grab me, so much as the spirit,” says Maria Grazia Chiuri, Dior’s first female creative director, talking to me from Athens, where its Cruise 2022 show took place in a stadium on Thursday evening. 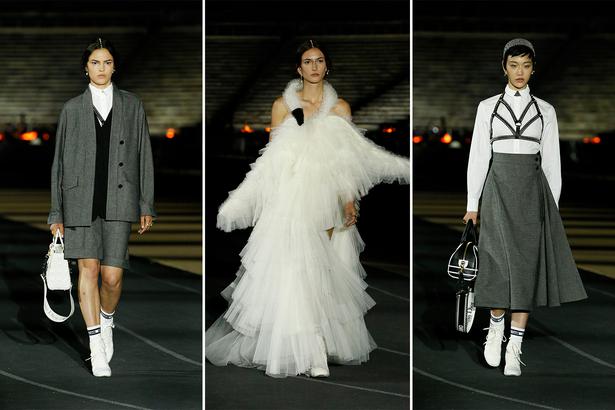 This show is a big deal — the first one Dior has done in front of a sizeable live audience since Covid shut down every fashion centre in March 2020. Sizable but nothing like the shows pre-pandemic — just 400 guests in the Panathenaic Stadium, built entirely of marble in around 100 AD. Given that it has a 50,000 capacity, there was plenty of room.

So why bother with a live show and transporting all that entails, from Paris to Athens, when we’ve all learned to live with digital presentations and when, by her own admission, she loves the intimacy of a small setting, where the audience can see the meticulous craftsmanship?

Perhaps because staging shows around the world is what this house has been doing since the 1950s. The Greek stadium also enabled her to hang on to some core Dior ideas — corsets (worn with shorts), gorgeous one-shouldered lame gowns reminiscent of the one Grace Kelly, a Dior fan, wore in 1955’s To Catch a Thief, cinch waist Bar jacket from Dior’s New Look and pleated skirts, and suffuse them with a sporty spirit. 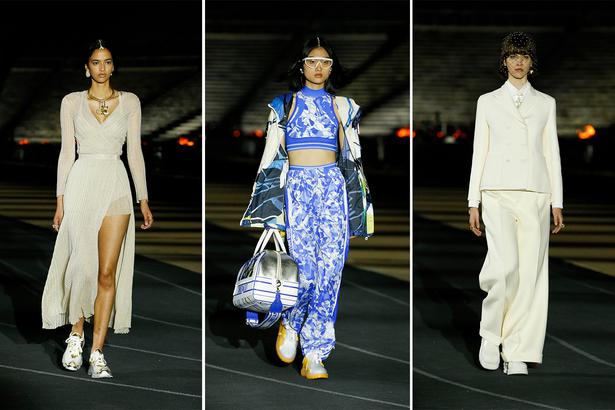 Those one-shouldered gowns were light as air and worn over fine sparkly stretchy knits. Skirts were worn with trainers. Suits with bowling bags. Two white trouser suits (there was a lot of white) had a looser, more androgynous jacket.

They were inspired by a 1930s photo of Marlene Dietrich and a reminder that much as the 1950s feeds some inner fantasies we may have about gender roles, even at the time, some 1950s mores and fashion were regressive.

The overt athletic references meant that Dior’s traditional emphasis on wasp waists became much more about celebrating a fit, strong body.

“The body’s always been so important in Greek culture," notes Chiuri shrewdly. “But it has never been about being the ‘right’ size, but about freedom”. Of course she can take the sting out of the 50s. This is the woman who turned a house that was almost suffocated under a froth of femininity into one that champions feminism.

The award-winning choreographer stars alongside a cast of creative powerhouse women for the house's new #DiorStandsWithWomen ca...