The grand finale at Dolce and Gabbana. Picture / Supplied Few other fashion houses have the resources of Dolce & Gabbana. Watching the designers at work for two days before their show, which took place this weekend, is instructive. A handful of house models practise their Dolce walk (a lady-like but purposeful sashay, rather than the depressed droop or aggressive posturing of other shows). They’re wearing semi-finished samples, over which Stefano Gabbana and Domenico Dolce cast a seasoned eye.

A silver collar-necklace with ribbon and crystal embellishment is placed over a silver sequined shift dress, then removed, then replaced. Another model appears in a silk cream dress with printed and appliqued silk and velvet flowers rambling across it. But are there enough flowers? Domenico Dolce reaches for a tray of flowers and places a cluster near the hem while Gabbana watches. A model, waiting to be fitted, plays with the gold frogging.

Jewelled shoes are added, from hundreds of different pairs lining the studio. Then it’s on to the bags, each a one-off and a mini work of art, featuring buttoned velvet quilting, jewels and castle adornments. 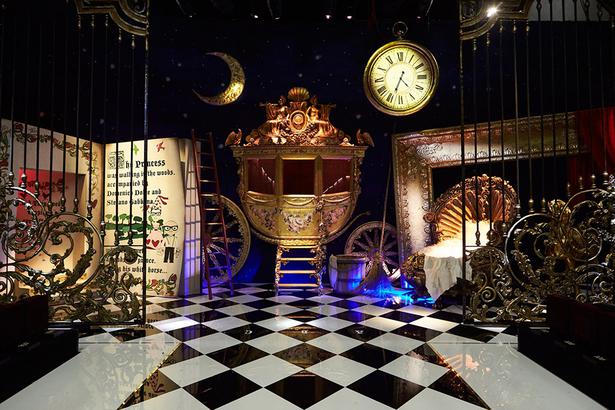 The set at Dolce and Gabbana. Picture / Supplied

Extraordinary as the accessories are, they are a relatively new segment of the brand’s business. The fact that women actually buy the crowns and tiaras which initially appeared in their shows as props surprised everyone. Among the global brands pumping out handbags and small leather goods, Dolce & Gabbana stands out as a label that has built its millions on selling actual clothes. “Fifty per cent of our revenue comes from ready-to-wear,” say the pair. At some big brands that figure is less than 10 per cent.

How do you sell a lot of expensive, beautiful, classic lace pencil skirts and floral dresses? By wrapping them in a fantasy. Dolce & Gabbana are old hands at this game: from the giant carved pumpkins at the entrance to yesterday’s show to the grand finale in which 95 besequined models flowed down the catwalk together in model formation, there is an unashamed, playful charm against which resistance is futile.

The inspiration was fairy tales. Embroidered castles, silk mice, at least seven dwarves and the White Rabbit’s pocket watch were embroidered, tapestried and appliqued across classic Dolce & Gabbana silhouettes - lovely Fifties-style fitted dresses and Sixties A -lines. Star pieces include houndstooth swing coats (very Cate Blanchett in Carol), Cinderella crystal shoes (or rather clear plastic), embroidered midi skirts and frilled jumpers and the 95 feather-light tulle-backed sequin dresses of the finale. The silver one from the preview appeared without the necklace. Even in fairy tales, less is sometimes more.