Once upon a time, a small girl so admired her creative and charismatic big brother she would do anything to please him, including morphing into his ideal woman.

Throughout her early teens and into her adulthood, Donatella Versace became a human avatar for the megabrand Gianni created, a vortex of 80s and 90s aspirations that could be summed up as: shorter, tighter, blonder, browner.

The pressure must have been intense at times. “I’m naturally a very disciplined person,” she tells me over FaceTime from her office. “I’m always the person who finishes their work before the deadline. But yes, I was the face of the brand — that’s what Gianni wanted — and I wanted to live up to that. My brother Santo was always working out, so that influenced me too. And I guess I wanted to reflect my inner discipline on the outside. I pushed myself hard. Any time spent not doing something — work, exercise — seemed like a waste. The gym became an escape for me.”

She says she literally sweated away some of the pain that washed through her after Gianni was murdered in 1997.

“I’m much easier on myself these days. I’ve realised that wanting to be perfect is like an illness. When it comes to looking after myself, that’s what I do.” No more flagellation. “I say, well done, even when I haven’t done brilliantly,” she says, laughing. As for exercise — punishing cardio or gym sessions are off the agenda. “When you’re 5ft 2in, building up a lot of muscle just makes you look shorter.”

It’s all about Pilates for her these days, and even some pasta. “Moderation stops you feeling deprived,” she says. Not easy for someone who for many years lived and partied hard.

At 66, Donatella’s as blonde, bronzed and glamorous as ever in a stretch, geometric print scarlet and blue top. But these days she looks markedly more relaxed than in the past — notwithstanding a pandemic that her company, like every other fashion house, has found challenging.

READ: Versace's 'Versacepolis' Was A Glorious Celebration Of Size

“My biggest fear was that people at Versace would lose their jobs. I’m glad to say that didn’t happen.”

Now she feels it’s time to get back to the business of dressing up — as rambunctiously and colourfully as before, hence the choice of Dua Lipa to star in the campaign. The 25-year-old British-born daughter of Kosovan-Albanian parents is one of the UK’s most successful and outspoken stars — one of the reasons Donatella wanted her.

“I love the way that generation is so engaged in politics. It reminds me of the sit-ins I used to take part in when I was at Florence University.” DV’s generation of students was protesting against university fees — plus ça change. 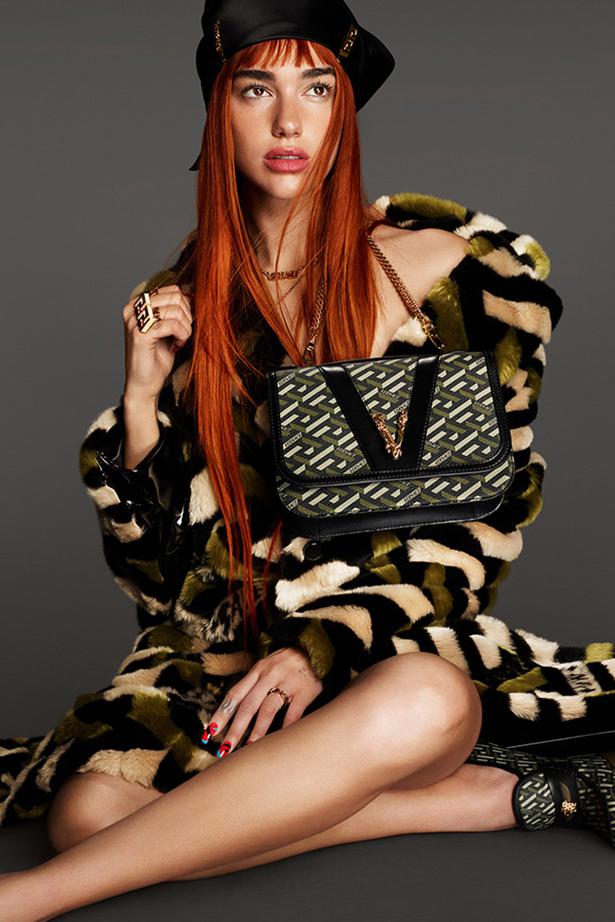 She also enjoys the way fashion has become fired up with political intent, even if she doesn’t agree with all the arguments. And she particularly likes the evolution she sees taking place in the way women’s bodies are being celebrated.

“Look at Dua,” she says. “There wasn’t a single moment on the set when she said, ‘oh, I like this because it makes me feel thinner, or that makes me look fat. She’s a girl who wants to look fit and strong. That’s it. She’s not obsessed with being thin, the way many celebrities and models were 10 years ago.”

As the mother of a 34-year-old daughter (Allegra, who inherited half the company when Gianni died but likes to live out of the spotlight that has focused on her family for almost four decades), Donatella takes her responsibilities towards promoting a sense of body positivity in everyone. Both she and Allegra know, to their cost, what it’s like to be intensely scrutinised and objectified.

“To be fair, Gianni was never into the cult of ‘thin’. The clothes were tight and sexy but they never took themselves too seriously and they always looked amazing on bigger women.” She doesn’t buy some designers’ defence that it’s hard to be size-inclusive on the catwalk because of the logistics of creating samples. “We always make the samples a little bit bigger because it’s easier to take in than to let out,” she says.

It must sometimes seem to anyone who doesn’t fit into fashion’s narrow precepts that changes are tectonically slow. Even Versace has only just expanded its range of sizes — up to an Italian 46, which is probably a generous UK 14.

This is where the argument gets sticky; brands claim the demand isn’t always there for larger sizes, but that may be because bigger women know they’re not going to find what they’re looking for at certain labels, so they don’t bother.

Maybe that will change with the phenomenon that is Precious Lee, the plus-sized US model who’s proving irresistible to the more culturally aware designers this year. Donatella worked with her on her catwalks and in this year's spring campaign.

“She’s not someone who wants to lose weight any time soon,” says Donatella. “She walks with such an attitude and such amazing posture — it sends out a really powerful message. It’s like that with Dua. She’s strong. My message is: girls, look at this!”

Perfumer Sophie Labbe Transports Us To The Italian Coast With Versace