I’ve always been fascinated by the way women look. As a young boy, I drew pictures of women — never men. I had a teacher in first grade who would wear long skirts and I could sometimes catch a glimpse of her slips poking out of the bottom of them. I was intrigued by the way women walked, how they sat, the secrets they might have. I’m sure you could have a Freudian field day with that.

My parents met in Geneva. My dad was Turkish, my mother was from Birmingham and they ended up settling in Montreal, so I grew up visiting grandmothers in foreign countries. I remember thinking they couldn’t be further apart culturally, except they both drank tea — one from a mug and one from a glass with sugar cubes on the side. Tea was a universal grandmother thing.

I’ve always thought that I’m a little bit tense-looking. But really, when I look at myself I see that I’m slowly morphing into my father.

It’s regrettable we aren’t living in a time of openness. I am a product of immigration. Not only that, but I’ve moved and settled in London. When we start becoming paranoid and not including certain groups of people based on where they’re from, it’s dangerous — not just for society but creativity.

One of the greatest satisfactions I get from my job is creating collections that work on lots of different bodies. It’s so important to me that people can actually wear my clothes: that they fit. There’s a vilification of the fashion industry when it comes to size, but actually I think it’s an overriding issue that has infiltrated into lots of the images we see. 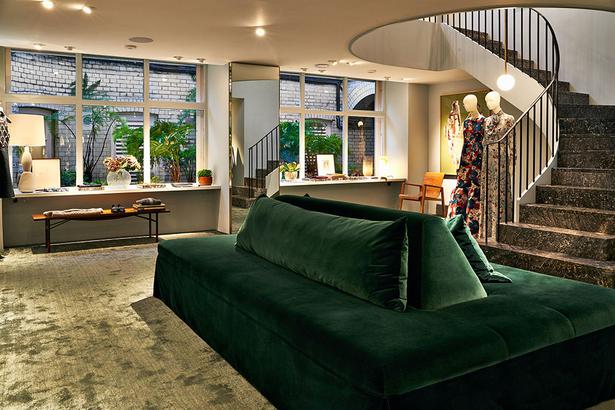 I came perilously close to death as a child, stepping on to a frozen lake that cracked beneath me. But in reality I’ve probably come much closer without being aware of it. The likelihood is that I would have been writing an email while crossing the road and was narrowly missed by a taxi.

It’s good to be a uniform dresser. I really am an incredibly boring person when it comes to what I wear: I like a T-shirt, navy blue trousers and some Stan Smith trainers. I have a collection of Stan Smiths in various states of decay lined up beside my desk.

The thing with loss is that it never completely fades. I lost both my parents when I was quite young, in my 20s, and though you heal, there’s always a scar.

Being a twin has had a huge effect on my life. From the day you’re born, you do everything with another person: go to school, ride a bike for the first time, learn to swim. My sister and I are very close.

Right now I’m feeling very happy. My partner and I are renovating, so home is a building site full of dust and boxes. We don’t have a kitchen sink and we’re eating takeaways on a makeshift bed, but the other day I woke up among the chaos and thought: “You know, life feels pretty good.”

• Erdem is available to buy at erdem.com and Net-a-Porter.com

Greta Villiger, head of womenswear at J.W. Anderson, likes to test boundaries — and break them.