The Perfect Raincoats for Fickle Weather

“We’ve been so lucky lately because it’s been grey and wet and windy most days,” says Nevada. “We see sun on the forecast and we’re like, ‘Nooo!’”

The couple are behind the label Okewa Rainwear, specialising in raincoats that won’t spoil the lines of a slick suit, waterproof trenches that can elegantly mask that gym gear (or onesie) beneath. A year since launching okewarainwear.com, they’ve opened a pop-up store in the windy city’s Dominion Building on Victoria St, where you’ll find their core designs, plus new collection Silk and Soul, until October 11. 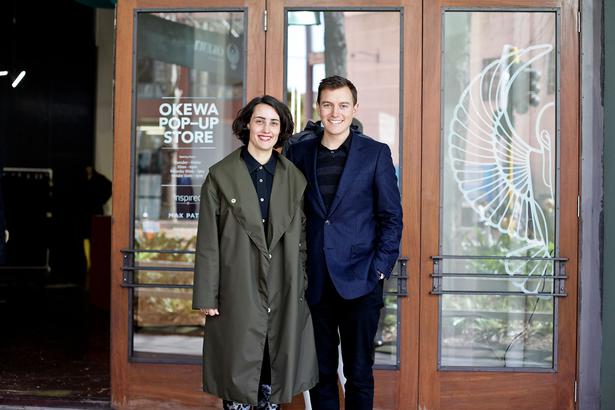 The couple has the inclement weather to thank for the concept; with no car, they’d often brave the waterfront rain and gales as they walked from their home in Oriental Bay to their jobs in town — fashion graduate Nevada at the Starfish and Alexandra Owen workrooms, and later the Andrea Moore store; Nick as an architect at Bell Kelly Beaumont.

“I was always looking for the right raincoat, something completely waterproof that looked great with the rest of my clothes and I just couldn’t find one anywhere,” says Nevada, who now works part time at Lululemon.

Nick was excited by the idea, knowing he could focus on the business side, while Nevada took care of the creative.
“I was always tramping around in my coat,” says the part-time architect. “I was well dressed underneath but I had to throw this unflattering thing over the top.”

They launched the label on Kickstarter, raising $50,000; limited production runs since have delivered Okewa raincoats to more than 20 countries.

Now, from this former Dominion newspaper printing press, with its distressed concrete floors and high ceilings, locals can see for themselves whether they prefer something classic or origami in style, hood-removable, pleated, with a special collar or buttons.

Nevada agrees: “People tell us they’ve waited 20 years to find a coat like this.”

How Men Should Dress

Bowtie or no bowtie? Our style panel weighs in on what to wear when the invite says formal