Sometimes an outfit has the power to make you smile. More often than not — particularly when that outfit incorporates a statement collar, leopard print, fluoro smiley faces, ruffles, lace, acid-bright plaids and/or ruffles — you can bet that the happy-making outfit in question includes a dash of Ganni.

Ganni is the Copenhagen-based fashion brand that has reshaped the way the world views Scandinavian style. It’s built very much in the image of its leaders, Ditte and Nicolaj Reffstrup.

Since they took over in 2009, they’ve defined the Ganni girl as someone who cycles between work and home and parties in a mix of animal print, bright knitwear and sparkly shoes. She’s fun, she’s empowered, she’s upbeat — not unlike Ditte, beaming through a video-conference screen wearing a Ganni-logo T-shirt with a huge smiley face.

"Every Ganni piece needs to be fun. It shouldn’t take itself too seriously — that’s really important. And it always needs an element of some contrast," she says from her bright, airy home office in Copenhagen.

Ditte oversees design and Nicolaj works on the corporate side, with a focus on sustainability. Before they were Copenhagen’s fashion power couple, they were ravers who met on the dance floor in 2004. "Like, literally," Ditte says. "We met at a party."

Ditte grew up in a small fishing village in the north of Denmark ("there wasn’t really a window to the outside, except MTV. I did a lot of daydreaming"), and at the time she and Nicolaj met, she worked as a fashion buyer.

When a gallerist friend started a cashmere brand as a side project, he asked if Ditte might like to help him. The barely-brand was called Ganni. "I was like, 'Yeah, why not?' So I kind of stumbled into it." 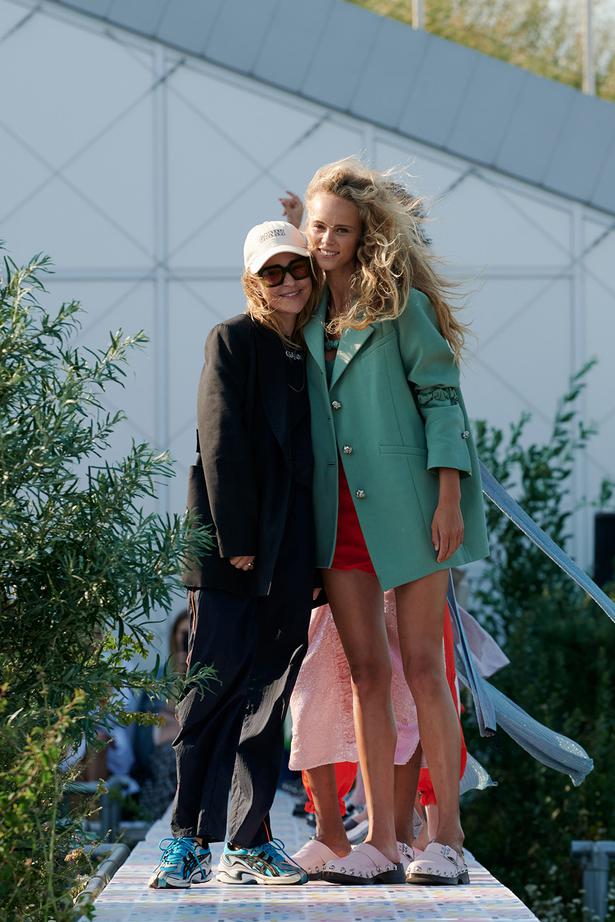 It went well — well enough that when the founder asked if the couple wanted to partner with him, they bought the company.

Nicolaj worked in tech and had never imagined joining his wife in fashion. "I thought that fashion was a little bit silly and shallow. I didn’t quite understand it, to be honest, but what I saw was that most Scandinavian fashion brands never made it out of Scandinavia."

In the couple’s analysis, Scandi fashion suffered from a bifurcated reputation. It was either very austere and minimal, or else a romantic, bohemian look "that we were throwing up over", he recalls. Ditte’s style represented a third way: a mix-and-matching, colour-clashing, high-low, vintage-inflected happy-fest. They called it Scandi 2.0.

"I didn’t dare to dream that it could be big," Ditte says. "But after a few collections, I could really see that we were on to something." The breakthrough came with the brand’s first show, in 2015. "We kind of came out of nowhere. I think a lot of people had very low expectations, and some were maybe hoping to see us fail," Nicolaj says.

They invited buyers and the press to a tired business hotel in the centre of Copenhagen that had a forgotten tennis court — akin to finding a court in the heart of Soho. There, rave-style waiters in tiny shorts served blended vodka cocktails, and models came out on to the court to pose with influencers after the show.

And they were off: influencers like Susie Lau and Veronika Heilbrunner hashtagged themselves as #GanniGirls, spreading the word about the brand’s bright, quirky aesthetic with every Instagram post. So did regular shoppers, drawn to Ganni’s sweet-spot pricing (most dresses cost between £100 to £300) and uplifting point of view.

Talking to Nicolaj, it’s clear that he identifies as an underdog — that he relishes reminiscing about those scrappy upstart days of proving people wrong. He laughs. "That’s totally right. I think we’re both what you’d call insecure overachievers — the kind of profile that’s constantly a little bit in doubt if what you’re doing is good enough, and then you compensate by working even harder. It’s a great person to have on your team because they are extremely productive and very ambitious. But being that person can be extremely stressful sometimes."

"It’s very much what drives us," Ditte agrees. "I always want to do better than the last show or last collection. The day you don’t feel like that, then you might as well just stop."

However, world domination is a matter of fact. A 112-strong team works at offices in Copenhagen, London and New York. The #GanniGirls hashtag has been appended to more than 77,000 Instagram posts.

Individual pieces, like the leopard-print rain hat and Chelsea-collar cotton-poplin shirt, have gone as viral as fashion gets, pushing the brand’s sales to about £50 million in 2020, with expectations for growth in 2021. A spokesperson for brownsfashion.com says, "Our customer loves the ease of the cool-girl aesthetic."

It resonates because underpinning the Scandi 2.0 cool is a sense of inclusiveness. "We all want to belong," Ditte says. "Fashion is a very closed world, and I really wanted people to feel welcome, that they’re part of our community. For me, fashion is for everyone."

Knowing what women are going to want to wear next is often instinctive. Although sometimes it’s accidental, as with last year’s horse print, which galloped across big-collared blouses and dresses and straight off every shop rail it reached. "It was something fun the print team came up with, just messing around."

Sometimes, she knows. Like with the first blouse with a Peter Pan collar. "That we really knew was going to be a hit. It’s easy to style with denim or a dress or knit; it’s cute and it’s feminine and you can mix or match it."

Ganni is not just a good-time brand — it has substance, too. It has mapped its carbon footprint and compensated for it since 2016. In 2020, it introduced an external responsibility board to help the brand become "the most responsible version" of itself, working toward 44 different corporate social responsibility goals.

It launched @ganni.lab, an Instagram feed dedicated to chronicling the brand’s efforts in this vein. An early post consisted of a red card with bold white text reading, 'Why we’re not a sustainable brand.'

"We are a fashion brand; we live off newness," Nicolaj explains. "And that’s a contradiction in terms. Because it’s real consumption, you can never really call that 'sustainable'. Ultimately we want to create a fashion collection that does no harm, or hopefully even has a positive impact on the world."

He has been able to focus more fully on the brand and its sustainability agenda since 2017, when the Reffstrups sold a majority stake in Ganni to L Catterton, the consumer-focused private equity firm. This enabled them to buy their forever home, a colourful villa in Østerbro, which they redesigned with parties and their busy family life in mind (they have three children, aged four to 11).

While many owners might have moved on, the Reffstrups viewed the partnership as a way to level up and build a global business. "For me it was like having a new, really good coach who could take the team to a different league," says Ditte, who used to play football.

All the grand plans came to a grinding halt last March, with the onset of the pandemic. As socialising and dressing up ceased, one of the first things they did was cut down the collection by half.

"It was like finishing a 300-page book, and then suddenly you need to cut half the pages, but still tell the same story," Ditte says. "It was difficult, but it was also like a good house clean. If you can tell the same story with fewer pages, it’s stronger, more powerful."

She seems relieved that good times are (cautiously) back. At every level of the retail-scape, brands are preparing for a wave of demand for party dresses. The Reffstrups love a party, so it’s no surprise that one of the main sections of Ganni: Gimme More, their new book, is a collage of photographs from past house parties.

The rules of successful party hosting are simple, Ditte says: "You need a good DJ. Someone who can play hits, someone who’s playing for the crowd, not themselves. That is number one. And then, if you’re the host, you need to open the dance floor — take off your shoes and go for it. And if you’re serving food, it should be a little bit laid-back, nothing be too ambitious or too posh."

But what’s a party girl to wear? Ditte peers through the screen towards me, assessing. "Are you up for short or long? Short? Then you should wear our short denim dress. It’s so cute and fun, but also casual because it’s denim. And you can still dance." All the way to the Ganni store, no doubt.

Ganni is available at Workshop.