In the crowded cafe at Tasmania’s Museum of Old and New Art (MONA for short) for the launch of David Jones’ autumn/winter 2019 preview, The Art Of Living, Australian supermodel Gemma Ward can’t help but stand out as she perches quietly on a bar stool among the throng of journalists, PR handlers and talent.

READ: 11 times Miranda Kerr Showed She Has Many Talents

Dressed in a cropped peach pant suit by Ellery, and still possessed of the pale, almost alien beauty that captivated the fashion world when she first stepped onto a runway, she is a breath of fresh air in an otherwise stuffy room.

Gemma is a seasoned pro when it comes to press junkets, but you’d expect nothing less from someone who’s grown up in the public eye. She was first discovered shortly after the turn of the millennium when she tagged along with friends to a casting call for the Australian TV show Search For A Supermodel at a mall in her hometown of Perth. 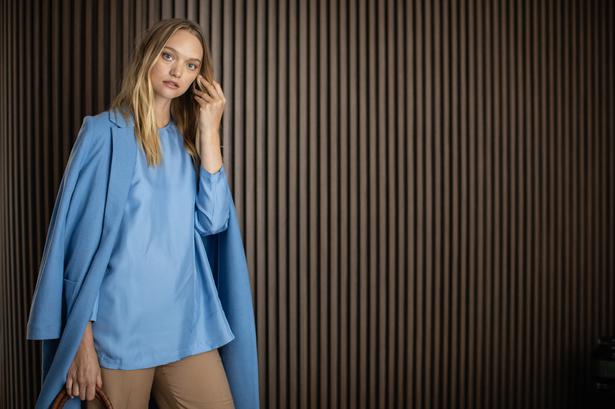 Approached in the crowd by an agency scout who was struck by her beauty, Gemma was too young to enter the competition, but signed to the agency straight away. Less than a year later, she was taken on by top modelling agency IMG, became Miuccia Prada’s muse and became the youngest model in history to grace the cover of American Vogue.

A slew of magazine covers followed, as did runway shows for the likes of Yves Saint Laurent, Chanel, Dolce & Gabbana, Balenciaga, Burberry, Louis Vuitton, Dior, Valentino and Hermès, to name a few.

Heralded as the Kate Moss of the mid-Noughties, Gemma took over as the face of Calvin Klein’s Obsession fragrance at age 17, from none other than the ‘90s waif herself.

Little more than half a decade after she was first spotted by the modelling scout at the casting call, Gemma had become Australia’s biggest modelling export, banking $3 million per year and securing her spot on Forbes’ annual list of the world’s highest-paid supermodels.

Tragedy struck in 2008, when her then-boyfriend Heath Ledger passed away at 28 from what was reported as an accidental drug overdose. Gemma disappeared from the modelling scene, although she made brief appearances in a handful of films, prompting speculation that she was transitioning to acting. But following a six-year hiatus, she made her runway comeback at Prada’s spring/summer 2015 show in Milan, and has continued to selectively appear in editorials, campaigns and shows since. Today, as she meets with Viva in Tasmania, it’s a long way from home for Gemma, who relocated from her native Australia to New York with her husband, fashion photographer David Letts, and children, Naia, 5, and Jett, 2.

The David Jones ambassador says her second home has offered her the change in pace she needed. “I’m not at break-neck speed as much as I used to be. I get invigorated by being able to walk everywhere — everything is so close. Every area you walk into has a different flavour,” Gemma says.

New York is unbeatable in the summertime, Gemma explains, especially with a young family. “We wander down to the park and stumble across a kid’s concert. Then we’d wander a bit further down to find someone performing Shakespeare to prelude a show, or people playing basketball or music they created off a boom-box. It’s so diverse,” she says.

In the early days of her modelling career, Gemma’s name was synonymous with the terms ‘pre-Raphaelite’, and ‘otherworldly’. And while these descriptors still ring true, Gemma holds herself differently now. She’s surpassed supermodel status by adding actor and mum to her repertoire. When asked about how she’s grown as a woman since having her daughter five years ago, she jokes she’ll get emotional.

“I feel like my daughter has taught me a lot,” she says. “One lesson she taught me is how special life is. How to see the world through a child’s eyes that is not jaded by what life can bring. She’s taught me to appreciate being a girl and a woman. I’ve learned how to harness my inner power, which has really helped me. Having a child fosters that protective instinct within. I’m always learning how to have patience with my kids and instill balance in our lives.”

Viva’s @ash_cometti shares a laugh with none other than Australian supermodel Gemma Ward @gemma in Tasmania for the annual @davidjonesstore autumn/winter launch. The event this afternoon focused on the art of entertaining, with the major fashion show happening tonight. See more from the exclusive event in our Stories, and keep a look out for NZ models @edenbristowe and @olivialefebre from @62management cameo takeover! ?? ???????? #TravelTuesday #Tasmania #DJsArtOfLiving

Routine is important in the Ward-Letts household, especially with Naia having just started school. “We keep to a good routine. My daughter has all her classes and I have mine — but it all goes at such a nice pace.”

She’s talking about her studies of traditional Ayurvedic medicine, which she now juggles with her work and home life. It’s been a balancing act for sure, Gemma says, with the shifting tides meaning she spends less time modelling and more time with her children. Her priority now is “spending time making sure that their lifestyles, memories and environment is stimulating and the best they can be.”

READ: Noelle McCarthy On Behind The Beauty Of Models

But like many 21st century women, she finds there are a number of competing factors that require her energy. “I feel like you have your work and your home life, but it can be difficult to carve out space for your creative pursuits. There are often areas of your life that you neglect, and you feel them calling to you,” says Gemma.

“It really is a juggle. It’s funny because it does make life more interesting and exciting, but you have to keep the pie chart in balance so that some areas aren’t getting too big or too thin.”

Nearly two decades on, Gemma’s still got it. Last year alone, she featured in a major campaign for Byron Bay-based label Auguste and on the cover of Harper’s Bazaar Australia. But the industry isn’t what it used to be, Gemma says, especially since the advent of social media. She’s been open about her struggle with body image previously, so is wary of Instagram’s influence on her mindset, and warns others to take care too.

“It can be challenging for certain people. But I think if you’re aware of where you’re putting your energy and what you’re letting into your life, you can curate your visual input to benefit you mentally,” says Gemma.

The idea of ‘visual input’ has been a golden thread throughout Gemma’s Ayurvedic training — which is about “making sure that the visual input that you’re having in your life is positive, because it can be very damaging to have too much negative visual input.

“It’s something people do have control over,” she heeds.

Instead, Gemma fills her feed with pictures from friends and family. But to Gemma, this visual input is much more than what she is exposed to on a screen.

“I like seeing great artistic films, paintings, museums and reading books. Using my imagination to create images rather than just taking in visual images on a screen.”

When asked about her thoughts on the hotly-contested topic of Photo-shopping, she says to a certain extent she disagrees with disclosing whether or not images are retouched. “I don’t think it’s necessary. I believe artists have been retouching forever. Photographers who used film also retouch. I think it should be looked at more as art.”

Despite being a little bit older and a whole lot wiser, Gemma says receiving any kind of negative press can still knock her self-confidence. Growing up isn’t easy for the majority of us, she explains, more so when you’re doing it in front of millions of people. Her coping mechanism? “Kick-boxing. Something releases inside me and I feel strong. It helps me reconnect with my primal self.”

She mixes up her fitness regimen with meditation, Pilates, yoga, swimming or “a really good butt crunch workout”, but says if she’s feeling low, kick-boxing is the one thing to give her a mental boost.

“There’s one particular class I go to in New York and it immediately boosts my mood when I walk out the door. It’s so challenging, I come out and feel like I can take on anything. It’s very empowering.”

Gemma’s holistic view of life now transcends everything she does. When she’s back home on Aussie turf, there’s nothing she loves more than waking up early and riding her bike to one of Sydney’s sprawling beaches, where she’ll meditate, run and swim. Starting her day with a little self-care has become top priority for Gemma, who says with a laugh that her children “kinda make me nuts”, but adds that she “can take that on because I’ve had this amazing start to my day”.

Eventually, Gemma has her heart set on moving to France where her parents live. “My mum has a house [in France], so we spend some time there every year. I spent two months there last year,” she says.

Her parents, who both work in the health industry, “fell in love with the way of life. [Mum] came from England and felt the French knew how to live. She’d go there and experience their long lunches with plenty of wine and lots of courses spread out over a day — the way they would experience that with each other and their families. She’s definitely incorporated that into her life and feels that it’s incredibly important,” says Gemma.

It’s something Gemma feels strongly about, too. Life for her now adopts a much slower pace, and she’s keen to keep “appreciating the beauty of the natural surroundings we have, the quality of the air we breathe and the water we drink – but also the relationships we have and the connections we make with others.”