Tributes are a strange business. A closure of sorts. Then again, there’s always the risk of reopening old wounds that may, more or less, have healed. Donatella Versace has been tussling with this dilemma for two decades.

It’s 20 years and two months since her brother, Gianni, was murdered outside his Miami mansion. At Milan Fashion Week last month, she finally tackled The Tribute. If you like your fashion shows with glitz, glamour and emotion, this was the mother of them all. Supermodels? She had them — today’s, and the originals.

Kendall Jenner and Gigi Hadid, Claudia Schiffer, Carla Bruni, Naomi Campbell, Stephanie Seymour, Cindy Crawford and her 16-year-old daughter, Kaia Gerber, wearing a crystal and embroidered catsuit with her mother’s image printed on it. Such a winning line-up, it was picked up by media and social media all over the world.

At the end, Donatella strode out, flanked by the supers, to the sound of George Michael’s Freedom — the favourite soundtrack to Gianni’s shows 20 years before. Her body as tiny and compact as ever but her face softer, her smile irrepressible.

At 62, the contrast she cuts with the traumatised, wrung-out pin-woman who tottered down the catwalk for the first time without her brother 20 years ago is a delight, especially in a business where, too often, the trajectory is from pomp to bathos.

“I knew if I was going to do it, I had to do it full-on,” she told me over breakfast (green tea and ... well, green tea) 10 days before the show. We were sitting in a cavernous penthouse hotel suite in London, where she had touched down for a couple of nights to show Versus, the “younger” Versace line, during London Fashion Week.

She visits London fairly regularly. Her 26-year-old son, Daniel, a musician, lives here, as low-key as his mother is not. “No one knows his background,” she says. “Not long ago, one of his friends said to him: ‘You know, I think I could get us some tickets for a Versace show’.”

Although The Tribute was clearly a huge deal for Donatella, she was relaxed and funny during our non-foodie breakfast — and shivering, unable to operate the air-conditioning off switch, but not surrendering in style terms.

A cardigan would have ruined the linear purity of that taut little black T-shirt, stripy, flip-hem skirt, sporty platform sandals and ruby antique ring that her daughter, Allegra, bought her in India.

Her excitement was contagious. Once she began showing me sketches of The Tribute collection, she couldn’t stop.

Many of the clothes aren’t merely timid nods to her brother’s genius, but unashamed replicas of some of his greatest hits: cacophonous baroque patterns, the Warhol prints that Andy gave Gianni permission to use, the crazily-embroidered leggings with matching mini-kilts (more is more, remember), the studded and fringed Wild West leather jackets and denim shirts, the leopard-print ball skirts ... they’re all here, ready to be dissected by a new generation.

“Before now, I felt I couldn’t really touch the archives,” says Donatella. “I always felt everyone would say, ‘Look, she’s copying her brother, and everyone knows he’s better than she is ... ’ I know he’s better than I am. But then Kendall [Jenner] told me she had been looking for some of Gianni’s printed jeans for ages, and that when she finally tracked down a pair online, she was so happy.” 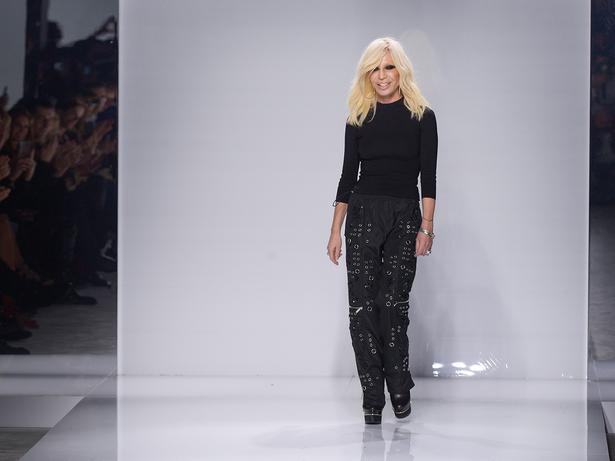 Gianni Versace’s provocative nose-thumbing at conventional good taste brought him attention, but the kitschy excess — the leopard-print ball gowns, slashed, safety-pin dresses and liquid metal columns that made many a starlet’s name, as well as his own — meant his genius took longer to be acknowledged.

Tailoring? He was a master. Princess Diana’s sleek new image in the final years of her life was down to Versace. Donatella says “he did everything first. In some cases, we hardly had to change anything for this new collection, because everything’s still so relevant.

And the construction ... The only thing we altered were the chain-mail dresses. The originals were so heavy. Now you can make them with a much lighter-weight mesh.”

It’s not just models and designers who have discovered an appreciation of Versace. When Donatella collaborated with H&M on a range in 2012, she was stunned by how youthful the crowds behind the crash barriers were. Probably as many of them wanted to see her as buy into a sliver of Versace history.

Yes, famous she is — so much so that she’s about to be portrayed by Penelope Cruz in The Assassination of Gianni Versace, the second season of Ryan Murphy’s critically lauded American Crime Story, based on a book by Vanity Fair writer Maureen Orth.

Cruz makes a convincing, albeit Hollywood-ised facsimile of Donatella, so with a degree of trepidation, since I know it’s a sore point, I ask her what she thinks of the casting.

“I’ve spoken to Penelope on the phone and she’s very respectful, but honestly, I wish of all the versions of what happened, they weren’t going with this one.”

For all the private jets, palazzos and major art collections, you wouldn’t have wanted to swap places with Donatella Versace for many years after her brother’s death. Divorce, drugs, creative insecurity, business restructuring, teenage children, the media ... all the souped-up, studded couture in the world couldn’t hide the fact that she was at sixes and sevens.

“I created a mask. I wore so much makeup, false eyelashes every day. My hair was so blond, so long. It was armour. I didn’t want to be seen,” she says.

I used to imagine she’d survived by blocking out the rest of the world. But it turns out she was acutely aware of all the speculation, going right back to the Mafia stories in circulation when Gianni was still alive.

“Of course we knew what they were saying. There have been, like, 250 books written about Gianni, about how we were involved with the Mafia. What Mafia? Why did they assume that? Because we were from the south of Italy?”

What upsets her most are the claims that Gianni was HIV-positive. “If he had been, he would have been honest and brave about it. He was one of the first designers to be openly gay. He was ill in the last year: he had cancer of the ear.”

He didn’t talk about his cancer; for a year, only a handful of family and friends knew.

Donatella, who had been his indulged, adored muse since they were children, would visit the office daily to go through the collections, then pop next door to her brother’s apartment to consult him. “It’s so strange to think about it now,” she says, “but it’s as if he was training me.”

Six months before he was murdered, he got the all-clear. “I remember us both taking a glass of Champagne — and neither of us drank, but we were just so happy.”

Donatella, her then-husband Paul Beck and their children, Allegra, then 11, and Daniel, who was 6, were staying in Rome for a fashion show when they heard about Gianni. They were a tight-knit clan, in the way Italian dynasties are. 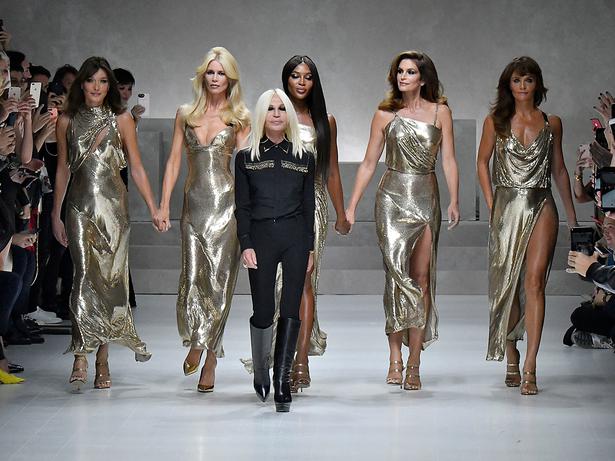 Gianni regarded Allegra more like a daughter than a niece; he left her 50 per cent of his company in his will (she now works there). “I took too long to go and tell the children,” Donatella says.

“They were watching Cartoon Network in the suite next to ours. By the time I reached them, they’d seen the news alert — their uncle on the street, the blood, everything.”

How do you move on from that? Professionally, Donatella’s collections were often strong — more pared back than her brother’s and more wearable. Financially, though, the luxury fashion groups LVMH and Kering were buying up family-run houses and pouring money into them.

Versace’s brand of hard, shiny glamour waxed and waned. The glamazon supermodel, which Gianni had helped cultivate, was replaced by a conveyor-belt of pale, meek, anonymous faces.

More problematically, the company was slow to come up with an It bag and a must-have shoe. Even after Donatella cleaned up her personal act, it took a long time to set the business straight. But then, two years ago, the Versace collection recaptured its old oomph while acquiring a sleek, almost minimalist gloss.

Gigi Hadid, striding forth in a slashed navy skirt and cropped jacket to a girl-power anthem by the Lisbon DJ Violet, became a feminist totem of sorts. Now that there’s a new CEO — Jonathan Akeroyd, who did an impressive job at Alexander McQueen — there’s palpable optimism about the company’s future.

READ: Power Dressing is Back

Donatella followed the gender pay gap furore at the BBC with interest. She says the idea of paying female employees less is “ridiculous”.

“I won’t stand for that in our company — even though the accountants would probably like me to. I wish women were more together, more honest with each other. I wish they would talk to me, but they think: ‘Oh, she’s Donatella Versace, she can’t understand the problems of real women.’”

What are her proudest career moments? “Keeping going, being open to new ideas and young people. I’m an old designer with a young mind.” At Versus, she has employed Christopher Kane and JW Anderson. Her latest discovery is Salehe Bembury, a sneakers nerd who’s giving her goosebumps with his footwear prototypes.

Donatella doesn’t come across as a wearer of trainers. “To be honest, I’m not. But I work out every day and I love hiking with my daughter.”

Now, there’s a metaphor: the woman who climbs mountains. Nor does she have any intention of stopping. For most of this year, the industry has been placing bets on another of her proteges, Italian Riccardo Tisci, who headed up Givenchy for 12 years, replacing her as Versace’s creator-in-chief.

“I can put that right,” she says. “It’s not happening. I don’t say never — but I’m not going anywhere right now.”