A new documentary takes a magnifying glass to the pioneering work of the late creative. Director Gero von Boehm talks about his friend’s unflinching point of view When you enter the red-carpeted entrance to the Helmut Newton Foundation in Berlin, you’re greeted by towering black and white photographs of women dressed in nothing but a pair of high heels.

“So much of what we do when we work in fashion is attractive and lovely,” explains American Vogue’s editor-in-chief Anna Wintour in the documentary Helmut Newton: The Bad and the Beautiful.

“Its what [the composer] Alexander Liebermann called ‘visions of loveliness’. But to contrast all of that, you need work that talks about the culture at large, is thought provoking and different — and sometimes upsets people.

“When you asked Helmut to take on an assignment for what fashion editor Phyllis Posnick and I would call a ‘stopper’ in the magazine — something that people would remember, that’s hopefully iconic, sometimes disturbing — you might consider it brave. I personally considered it necessary.” 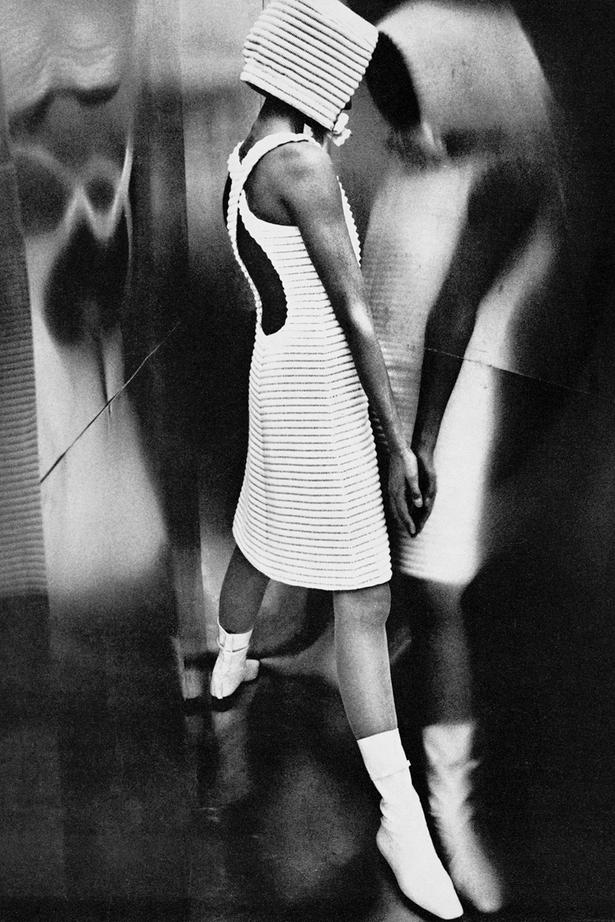 The film’s release coincides with a new exhibition at The Helmut Newton Foundation — Helmut Newton. Legacy, which features many of his more unconventional fashion photographs, marking what would have been Helmut’s 101st birthday. The exhibition runs from the end of October until mid-May next year.

“Helmut Newton can be grasped only with difficulty,” explains the director and curator of foundation, Dr. Matthias Harder.

“Most of us believe we know his work, at least its important aspects,” says Matthias.

“Yet the German-Australian photographer left behind an oeuvre so influential and iconic that every systematic effort to come to terms with it, with even the slightest claim to comprehensiveness, is doomed to failure. It is at once of our time and timeless; even today, it disturbs and enchants us.”

Speaking from his home in Germany, the film’s director Gero von Boehm says the documentary was a chance to impart to a new generation of creatives the danger of creating mediocre work. “I want people to understand how important a certain amount of provocation is,” says Gero.

“I think we need more provocateurs in photography and in the arts, and that could indeed be a message of the film, if you will. I would be happy if it encourages young photographers and artists to go to the limits, to push the envelope, to have the courage to be a little more anarchistic, and not to be politically correct all the time. It is important for the freedom of art, for the freedom of expression.”

During the process of putting this documentary together, what were some of the things you discovered about Helmut that surprised you?

In the beginning I wasn’t aware that Helmut’s formative years had influenced his work to such an extent — the wonderful intellectual atmosphere of the Jewish grand bourgeoisie in Berlin and the aesthetic surroundings in Berlin of the Weimar Republic, the movies, the cabarets, the cafes with their dancefloors.

Marianne Faithfull says in the film: “Helmut for me was Weimar, German Expressionism,” and she refers to Otto Dix and other great painters of the time.

When you’re interested in nothing but girls and pictures and all of a sudden, in 1933, you’re surrounded by nothing but Nazi imagery — by this cult of the body — it is only natural it leaves an impression.

You can feel hints of Leni Riefenstahl, Hitler’s star film-maker, in many of his pictures. He knew that very well and called Leni a bloody genius. He admired and hated her at the same time.

They came to know each other quite well at the end of their lives. He told me all that on our long walks through the Berlin of his childhood and adolescence, and all of that came as a surprise to me.

The criticism around Helmut’s work questions whether he was misogynistic. As a creative yourself, do you think it’s possible to separate the artist from the work?
No, of course not. How can you separate the two?

When you’re creative, the inner self speaks. That’s how Helmut’s fantasies came to the surface, and the admiration he had for strong women. Most of his pictures were not made just to shock. 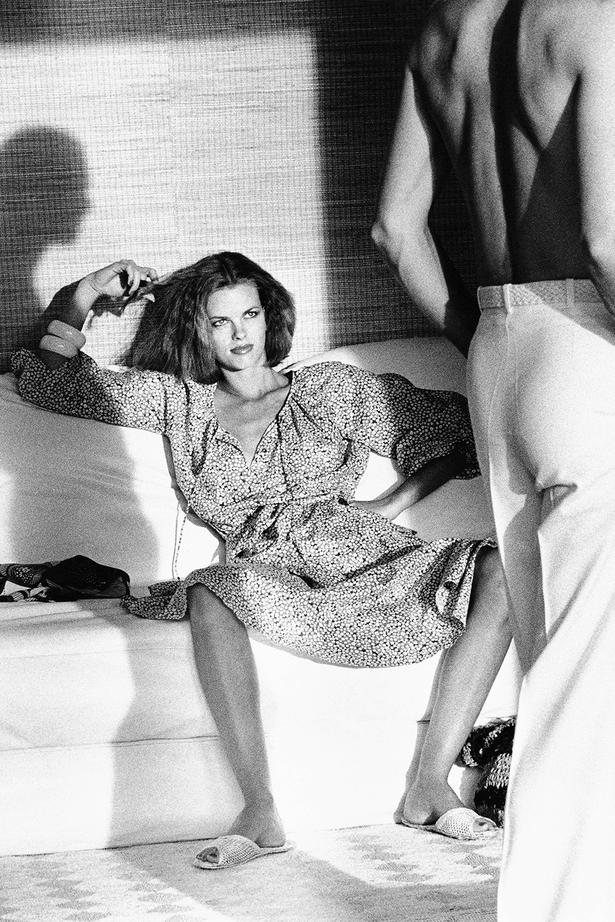 It’s amazing to hear from some of the famous women he photographed, including Charlotte Rampling, Grace Jones and Marianne Faithfull. What do you think Helmut would have made of fashion photography today in our digital age?

Many of Helmut’s pictures wouldn’t appear in magazines today. Some feminists would rather like to lock them away, just like other works of art. But it is a dangerous tendency. There can be too much political correctness.

Freedom of art, freedom of expression is something very precious. Censorship is a characteristic of dictatorship — in this case it’s about dictating taste. We should oppose that.

If Helmut were alive today he would probably continue to shoot what he liked, but rather for exhibitions and books. Fashion photography has become quite mainstream and often boring again — no place for Helmut. I think another revolution is needed.

There’s a lot of conversation about giving power to the subject. When it comes to the visual and psychological representation of the idea of power in Helmut’s work, what did you learn?

Many people think that the women he photographed were just objects, which is certainly not true. Everything in front of a lens becomes an object, but in Helmut’s work there is much more.

He is telling us stories, or to put it correctly, the beginning or the end of a story, and it is up to our fantasy to imagine what happened before or after the scene we see.

This is very cinematic, and he was strongly influenced by film. That is what makes his photographs so powerful in their own right, as art works (although he hated that term). But most of all he wanted to show us how powerful women are.

For example, there’s a famous diptych by Helmut featured in the film. Two separate photographs. On the left-hand side you see models beautifully dressed in haute couture clothes, and on the second photo, on the right-hand side, the same girls but totally naked in exactly the same poses. As if a magician had taken off their clothes.

What does the photo tell us? Strong women are strong even without clothes, without couture. They don’t need it. Then there is the really groundbreaking picture of the famous Yves Saint Laurent Le Smoking tuxedo.

Again, a naked woman next to the dressed one in the tuxedo — there is a strange kind of sexual suspense in that picture on a deserted street at night in Paris — but you also have the feeling that the two of them are powerful. 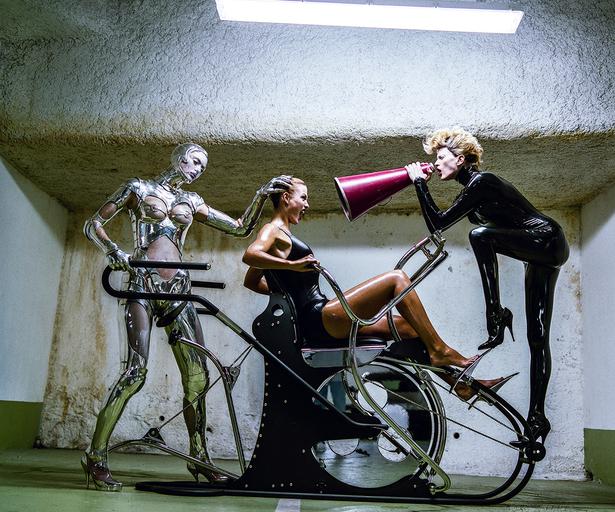 In the film, fashion editor Phyllis Posnick shares a memory of painstakingly sourcing dolls’ heels to dress a roast chicken photographed by Helmut for an American Vogue essay — that was a hilarious moment and speaks to the depths in which creatives go to create the perfect image. Do you think Helmut would have been able to create the same body of work if he had no sense of humour? Is his own “lightness” part of why his work stands the test of time?

Humour was very important to Helmut. You’re right. Humour always creates a certain lightness — and it also creates a distance towards life, the world, and yourself, your own actions and circumstances.

You don’t take yourself too seriously. Humour and irony — they also helped Helmut through very difficult times in his life.

There’s a great mix of visuals from the archives coupled with voiceovers of [Helmut’s wife] June. Where were these sourced from?

June accompanied Helmut to almost all of his shootings, and made behind-the-scenes clips with her video camera. She captured great and funny situations. She was generous enough to share that material with me for my documentary.

How long was the process of putting this film together and what challenges did you encounter along the way?

It took about two years altogether. The main challenge was the vastness of Helmut’s work. I had to choose from hundreds of thousands of photographs which are in his estate at the Helmut Newton Foundation in Berlin.

In the very beginning I established a close and exclusive co-operation with the Foundation and its curator, and that helped a lot. I had total freedom in my selection and could include the most meaningful pictures from each period into the film. I had access to notebooks, to contact sheets, to objects. The Foundation was very generous.

Another challenge was to convince people like Anna Wintour and Grace Jones to participate. They usually don’t give any interviews. But for Helmut they made an exception. The film features a talk show clip with Susan Sontag, from the 1970s, where she debates with Helmut about how his photos are misogynistic. Your film offers a more balanced conversation around Helmut’s work and why it can be polarising for people. Why was this clip important for you to include?

Because Susan’s viewpoint was shared by many women at the time, and it has to be taken seriously. The film also shows that Helmut was not just a fashion photographer but he wanted his photos to tell something about the society in which women live.

For a campaign for Blumarine with model Nadja Auermann on a hotel bed wearing a chemise, she looks like a Barbie left on that bed. In the film she says, “It may be a somehow sexist picture, but it tells men you want your wife to run around as sexy as possible but then you treat her like a Barbie doll. Helmut holds a mirror in front of the men in society and has a real message.”

The film also captures the special bond and love affair between Helmut and June, capturing the understanding and support of these two creative minds. Did June get a chance to see the film before she passed away?

Unfortunately, she was already too ill when the film was finished. But she had given me her advice in the beginning, and that was very precious. I am grateful to this extraordinary lady, and will never forget her.

What are you working on at the moment?

I’m working on a documentary for French and Italian television about Amanda Lear, the disco queen of the 70s and 80s — she had an amazing life. I am also working on a three-part series about the late Karl Lagerfeld, who was a mutual friend of Helmut Newton and myself.

Helmut Newton: The Bad and the Beautiful presented by Viva is showing as part of the New Zealand International Film Festival. For tickets and session times visit Nziff.co.nz

Dunedin’s isolation, remoteness and harsh winters have always bred creativity, from the city’s dynamic music history, to its co...