Vatican officials lingered over images of Balenciaga evening coats, Madame Grès capes and the Schiaparelli gown embroidered with the keys of St. Peter, pieces that clearly referenced the familiar silhouettes of their ecclesiastical and monastic garments, but flipped past the more risqué looks.

Ultimately, they agreed to lend 41 items from the Sistine Chapel sacristy to the Metropolitan Museum of Art. The Met would have been grateful for even six.

The items on loan, which include papal robes and accessories never viewed outside the Vatican, debut May 10 as a part of "Heavenly Bodies: Fashion and the Catholic Imagination." Organised by Andrew Bolton, head curator of the Costume Institute (the beneficiary of the famously fashion-forward annual Met Gala), the exhibit has drawn attention for its seemingly provocative juxtaposition of religion and fashion.

Church leaders have enthusiastically supported the celebration of Catholic art and fashion.

Cardinal Gianfranco Ravasi, president of the Pontifical Council for Culture, wrote an introduction to the exhibit's accompanying catalogue, referencing the mock ecclesiastical fashion show in Fellini's 1972 film "Roma," and reflecting on the significance of God clothing Adam and Eve in the Garden of Eden. The Rev. David Tracy, one of the most significant Catholic theologians of the past half-century, wrote a preface. And local Catholic schools have been clamouring to schedule tours.

"I almost fell out of my chair when they told me they had gotten David Tracy writing for them," said the Rev. James Martin, a Jesuit priest and the author of several popular books on Catholicism. Martin had been invited to preview some of the exhibit earlier this year to give the team a sense of how various pieces might be perceived by Catholic groups. 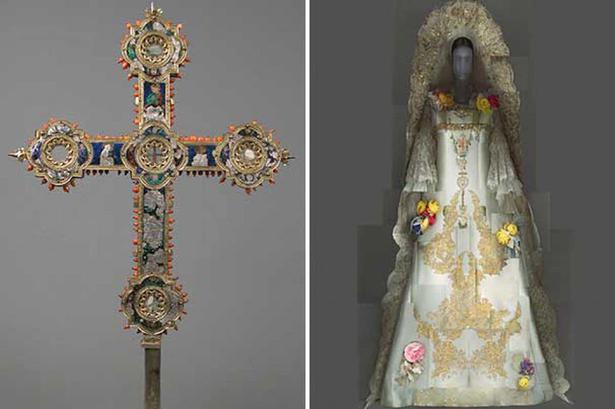 "They have been exquisitely sensitive to Catholic sensibilities," he added. (Martin himself suggested Bolton contact Cardinal Ravasi and facilitated the introduction through Bishop Paul Tighe, secretary of the Pontifical Council for Culture.)

To coordinate a loan from the Vatican, Bolton queried the Vatican museums director and papal officials before finally reaching Paolo Benedik, custodian for the sacristy at the Sistine Chapel. Unlike Vatican museums collections, items still used in liturgical celebrations are kept in the chapel's sacristy, an adjoining room housing vestments and other ecclesiastical items.

Bolton met with Benedik to discuss and view the pieces, and then again with Archbishop Georg Gänswein, the papal household prefect, who asked that the Met formally send a letter to Monsignor Guido Marini, master of Pontifical Liturgical Ceremonies, asking his approval for the loan.

For some garments, like a particularly delicate suite of vestment sewn by 15 women over 16 years, the Met agreed to help with conservation. All told, Bolton made 10 trips to Rome, including a two-week visit where photographer Katherine Jebb beautifully scanned the pieces into dynamic images for the catalogue. The process was both exciting and, at times, intimidating.

"Oh, gosh, yes, I was nervous," Bolton recalled about those early visits to the Vatican. Raised Catholic, Bolton was awed to visit a place he had heard so much about as a child. "These are extraordinary men of faith. They have this gravitas, not only because they are holy men, but because they are also incredible theologians."

The only condition the Vatican made was that the pieces be displayed separately from the fashions, which was Bolton's plan from the beginning. They also preferred the pieces be shown in a simple white cube, so that people could focus on the craftsmanship and the quality of the items. This, too, was already the plan.

The exhibit will be staged over three locations, forcing a process Bolton likens to a pilgrimage: The Vatican pieces will be displayed in the minimalist Anna Wintour Costume Center, while the modern fashions inspired by mosaics, iconography and the ecclesiastical garments of the Catholic Church — including some stunning Dolce & Gabbana gowns and Versace ensembles embroidered in iconography — will be displayed throughout the Byzantine and Medieval galleries; those modern pieces with monastic influences will be displayed uptown at the Met Cloisters.

Bolton's palpable enthusiasm for the theological stakes of the show surely enamoured him to church officials. He attributes the very idea for the exhibit to reading theologian Tracy's "The Analogical Imagination," which he encountered through the works of the Rev. Andrew Greeley, both of whom argue for the primacy of imagistic narratives for Catholicism. Greeley introduced the phrase "the Catholic imagination" into American vocabulary.

"The thesis of the entire exhibition is the idea that metaphor is the driving force behind the Catholic imagination," Bolton said on a recent afternoon, more giddy about the intricacies of theology than one might expect from the world's leading expert on high fashion.

"The show is about Catholic symbolism and Catholic iconography, but it really is about how these designers and artists, raised Catholic, were impacted by that in their creative life, and how that has expressed itself in their works."

Initially, Bolton considered organising the show around the influence of five major religions on fashion writ large. But working late one night, staring at the storyboard of images he had pinned to the walls, he was struck by the sheer number of major designers who had been raised Catholic.

From Schiaparelli to Prada to Chanel to Valentino to Thom Browne today, these designers were also masterful storytellers, and he wanted to emphasize the relationship between their use of narrative and their Catholic upbringing.

In organising the exhibit, Bolton worked closely with C. Griffith Mann, head curator of the Department of Medieval Art and the Cloisters, and Barbara Drake Boehm, senior curator for the Met Cloisters. Both Mann and Boehm spent months working with Bolton to plan the exhibits.

The depth of the Met's collection allowed for careful and evocative pairings. Boehm described how a Balenciaga wedding dress in the collection, famous for its minimal use of seams (lore has it as one-seamed, but Bolton concedes there are at least five) will be displayed in the chapel of the Cloisters, under a large crucifix. This placement references both the sacraments, but also the story from the Gospel of John that Christ's tunic during the crucifixion was of one cloth and had no seams.

The Met hosted a press presentation at the Galleria Colonna in Rome, Italy, ahead of the spring 2018 Costume Institute exhibition, "Heavenly Bodies: Fashion and the Catholic Imagination." The exhibition will be presented in two of The Met's locations: The Met Fifth Avenue and uptown at The #MetCloisters. The thematic exhibition will feature a dialogue between fashion and masterworks of medieval art in The Met collection to examine fashion's ongoing engagement with the devotional practices and traditions of Catholicism. Mitre of Pius XI. Courtesy of the Collection of the Office of Liturgical Celebrations of the Supreme Pontiff, Papal Sacristy, Vatican City. Image courtesy of The Metropolitan Museum of Art/@sgpitalia @metcostumeinstitute @themetcloisters #TheMet #MetGala #MetHeavenlyBodies

"When I was in Jerusalem, I loved walking next to the Franciscans, because they carried this kind of quiet authority in their brown robes," said Boehm, comparing the symbolic power of clothing in both monastic and secular settings. "And when I look at these gowns, I wonder, 'Wow, if I could wear one of those I might have that quiet authority.' "

For visitors, the opulence of the religious items on display and the excesses associated with the world of high fashion might seem counter to the values expected of a religious organisation, and even to the messages preached by Pope Francis himself. Others see this reaction as an inherently non-Catholic lens through which to view faith.

SEE: The Coolest Red-Carpet Looks from The Met Gala 2018

"Religion can occur through beauty, just as it can occur through morality. One should keep both," Tracy said. For him, beauty remains a valid and important way to express a religious worldview. "A lot of theologians don't realise you can think through image, and not only through concepts."

Claiming he knows nothing about fashion, he was nonetheless delighted to contribute to the catalogue.

Morgan pointed out that in the thought of Plato, Plotinus and early Christian thinkers like Pseudo-Dionysius, beauty in the ancient world often functioned as a source of spiritual elevation.

READ: Meet The Next Generation of International Fashion Talent

"Beauty remained one of the great expressions of divine love, with an attractive power that pulls human beings out of the mud and out of the selfishness and toward a cosmic return to God; and that's how the universe works in the Catholic imagination," said Morgan, who also contributed to the catalogue.

The influence of Catholicism throughout the show extends beyond the use of iconography and monastic silhouettes to an entire way of thinking about beauty.

"The Met exhibits often tackle themes that deal with religion, so the notion of having objects that speak in a deep way to religious themes is not unusual," said Mann, the head curator of the medieval collection. "I think what is unusual is asking people to think about this commutation of contemporary design and modern design with religion. And this is the mission of Andrew and his colleagues, to ask people to think of clothing as an art form."

And for this exhibit, Bolton is also asking people to think of clothing as a theological argument about the world.