A woman's dress should be like a barbed-wire fence: serving its purpose without obstructing the view."

So said Sophia Loren, and we all know the sort of vista she was talking about: a generous swell of cleavage, hip and bottom that leaves stylish women awestruck and strong men faint.

Never was the look better demonstrated, or the view clearer, than in 1994, when Elizabeth Hurley donned Versace's scrap of fabric held together by safety pins, before sashaying her way down the red carpet into instant stardom.

The Italians have never shied away from a little, or even a great heap, of vulgarity. From Bulgari to Roberto Cavalli, more is always more, and bling and bosoms rule the roost. So it gladdens my heart to know Britain's Victoria and Albert Museum is paying homage to the magnificent spectacle of Italian costume with a glitzy show,The Glamour of Italian Fashion 1945-2014.

From the seminal Sala Bianca catwalk shows held in Florence in the 1950s (organised by Giovanni Battista Giorgini to propose Italy as a rival to Paris) to Gucci, Pucci and newer talents such as Pierpaolo Piccioli, this will be the most comprehensive exposition of Italian style ever staged.

More than that, it should prove to be joyous, because pure, unadulterated lust for life is what Italy exports best to the rest of the world.

The Italians gave us the Renaissance, then followed that with the world's finest cars, women and cuisine - all these pleasures are linked.

Ferraris demand a beautiful co-driver, while the curves of Sophia Loren, Gina Lollobrigida, Claudia Cardinale and Monica Bellucci suggest both an Alfa Romeo's flanks and a spot of peasant cuisine.

When the Naples-born Loren was asked the secret of her figure, she replied: "Everything you see, I owe to spaghetti." No wonder then, that Italy, in 2006, became the first country to ban size zero models: this is a nation that worships food, flesh and sensuality.

The carefree voluptuousness of Italian starlets proved infectious in the 1950s and 60s, when their American counterparts crossed the pond to Rome's Cinecitta Studios to take advantage of the romantic setting and cheaper production costs.

Audrey Hepburn filmed Roman Holiday there in 1953 and looked every bit the native in her tight white shirt and full skirt, perched on a Vespa. Canny Salvatore Ferragamo arranged for her to be photographed visiting his Florentine store to buy shoes.

Elizabeth Taylor looked even more at home a decade later when filming Cleopatra. She was pursued by the press pack along Rome's Via del Babuino, sporting both beehive and opulent gems. So fond was Taylor of her favourite jeweller that Richard Burton once joked: "The only word Liz knows in Italian is Bulgari."

It's no surprise that the word paparazzi (named for the news photographer in La Dolce Vita) was coined during this age of ostentatious glamour.

Like Taylor, Hepburn and Loren, I have a deep-seated faith that Italian style flatters the form like no other. Anyone who's ever tried on one of Dolce & Gabbana's slinky, corseted frocks will know how it feels to move from mortal to goddess in 10 seconds. 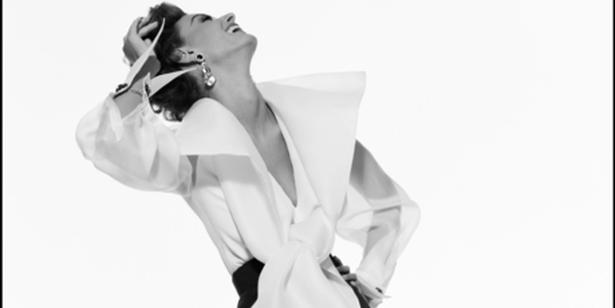 The March issue of Vogue carried a glorious advertisement for Dolce & Gabbana that shows four laughing, leggy, bosomy models being offered oranges by a couple of lascivious tradesmen. The symbolism is obvious - a sort of reverse Nell Gwyn - and utterly delightful: my ripe fruit for your ripe fruit.

Contrast all that lush sensuality with the three scowling, slouching waifs in one Chanel ad, or the sexless man and woman wearing pristine white in a Michael Kors image, disembarking from a plane while they studiously ignore one another. Call me tacky and obvious, but I don't want to live in a world where fashion is about looking a part, but not about living it.

The most stylish woman I know, the novelist Christobel Kent, who owns a flat in Florence, declares that she owes everything to Italy: "When I went to live in Modena in the 1980s, I was a standard issue English Lit graduate. I wore grubby plimsolls, socks and dungaree dresses and went braless.

At that time, the extraordinary Italian tradition of the passeggiata was at its height: every evening between four and seven, the crowds would parade up and down the Via Emilia checking each other out, and all the women would be dressed to the nines - pompadoured, high heels, skin-tight skirts, hoiked bosom - and men would blow them kisses and tell them their breasts were like doves.

"They would stare at me, on the other hand, as though I had escaped from the lunatic asylum. By the end, I had conformed, quite happily, and was wearing body-con dresses in jewel colours, high-heeled sandals, push-up bras and low-cut tops."

She points out: "Age is absolutely no barrier in Italy. Even elderly women will wear fitted skirts and have cascading, highlighted hair.

"Women in Italy are for being sexy; once you stop making that effort, you might as well creep off and die."

This philosophy is evident in Paolo Sorrentino's stupendous extravaganza, La Grande Bellezza, which took the Oscar for best foreign language film this year. Almost all the coiffed and couture-trussed female characters are in their 50s, including the buxom pole dancer Ramona.

The movie is set in a Rome that's half Spanish Steps and half nightclub. Vulgarity is both a source of terrific vitality and looming ennui, as Sorrentino documents the beguiling contradictions of the Italian soul. But then, this is a nation that promotes extravagance and piety on equal footing.

Of course, gaudy glitz isn't the only note to Italian fashion, even if the more restrained (some might say dull) taupe pant suits of Giorgio Armani and witty conceptual flair of Miuccia Prada often seem more the exception than the rule.

When you buy Italian, you buy into an extraordinary heritage of artisanal skill. The painstaking arts of leatherwork, embroidery, knitwear and fine fabric manufacture have been preserved across the country to an unrivalled degree.No one disputes that if you seek the most exquisite shoes, belts and bags in the world, they will be made there.

The solidarity of national style is such that Italian women will never be seen dashing around en masse in ballet flats or, heaven forbid, Converse sneakers.

Stephen Bayley, the style guru who wrote La Dolce Vita: The Golden Age of Italian Style, perhaps puts it best: "The Italians, it is often said, have not separated art from life. The concept of bella figura confirms this: everyone is on parade all the time and everywhere. In Verona or Catania, bedroom and the catwalk, the street and the salone are not so very different."

Which is why women who love sex, stockings and spaghetti will always worship at the shrine of Italian glamour.

Professional & Transeasonal Looks For Every Moment