This time last year, one couldn’t move for Marie Kondo. Known as KonMari to her fans, the Japanese pop-guru of minimalism was given a Netflix show that split the Western world squarely between those inspired to chuck away anything that didn’t “spark joy” and those who couldn’t bear to rid themselves of books they’d never read.

The KonMari method, with its moral imperative to declutter, feels a little old hat now. If 2019 showed us anything, it was the extent to which our addiction to throwing things away is suffocating the planet. Apart from the plastic bottles and nappies, 100 million kilos of textile waste from New Zealand alone end up in landfill each year. At a time when we are increasingly conscious about what we consume (meat, air miles, bamboo toilet paper), fashion has been catapulted into the sustainability debate.

Thus, How to Break Up with Fast Fashion, the second book from journalist and self-confessed fast-fashion addict Lauren Bravo, explores how we got into a situation where we are buying 60 per cent more clothes than we were 15 years ago and keeping them for half as long, and what we can do about it.

It may sound like a zeitgeisty concept dreamed up by a publishing house to tap into a frenzy of “New Year, New You” customers, but textile production produces more carbon dioxide than international flights and maritime shipping combined (1.2 billion tonnes annually).

Our enslavement to having the latest new thing, as Bravo deftly points out over the course of this witty, persuasive book, is costing human lives — among them, the 1134 killed in the 2013 Rana Plaza disaster, when a garment factory in Dhaka collapsed — and the planet dearly. It’s about time we paid attention.

Part grim awakening, part practical guide, How to Break Up with Fast Fashion knows its audience — millennial and Gen-X women with too many clothes. Bravo writes with the wry verve of a viral tweet and this book, like her 2018 What Would the Spice Girls Do? How the Girl Power Generation Grew Up, is littered with entertaining references to pop culture and online flotsam.

The whole thing is pertinent and funny, but its power rests in Bravo’s refusal to preach. How to Break Up with Fast Fashion charts a year in which she kicked the habit of a lifetime and stopped buying brand-new clothes. Instead, she fed her hunger for novelty by eBay, charity shops and dress rental agencies. She swaps and lends, alters and mends (not so much as a would-be seamstress but simply “in really desperate times ... sewing my bra into my dress to keep everything safely contained”).

She speaks to designers and influencers, and addresses the merits of eco-friendly fabrics. Crucially, Bravo examines just why we buy so many clothes in the first place, a heady maelstrom of big business and ever-cheapening supply but also emotions. Bravo reflects with poignancy on how new clothes can make the struggle to accept oneself easier.

The fast-fashion industry is a complex one, spanning transcontinental trade structures, thorny environmental issues and intricate social mores. This book shouldn’t be treated as an in-depth study of any of them. Its greatest weakness is that legitimate objections — such as what would happen to the economy if we all stopped shopping from the high street, with fashion contributing $64 billion to the UK’s GDP, for example — are skimmed over like the hem of a bias-cut silk skirt: with grace, but all too swiftly.

Still, it is not easy to weave a gripping narrative out of grim statistics, far-off case studies (such as the children who develop skin and neurological problems from dye run-off along the Citarum River in Indonesia) and homespun tips about stain removal, but Bravo succeeds. She makes her readers care — a real feat, at a time when we are saturated with climate-crisis reportage — and she triumphs in encouraging them to follow her lead.

After reading 50 pages, I found myself admiring a stripped-back wardrobe, having neatly folded less-favoured clothes into two big bags destined for the charity shop. After 100 pages, I was delighting in wearing things I had forgotten I owned. Several weeks after finishing the book, I haven’t strayed into a high-street store once, but after days of consideration, I caved for some vintage Laura Ashley on eBay.

For those old enough to have worn that Laura Ashley skirt the first time around, this attitude to clothes will sound normal, but to women of Bravo’s generation, of which I am one, it feels bold and revolutionary. We have grown up against endless persuasion to want more, want new and want cheaper when it comes to clothes. But, as Bravo argues, if enough of us rail against how fashion is currently made and sold, the industry will have to change, too. That can’t happen quickly enough. 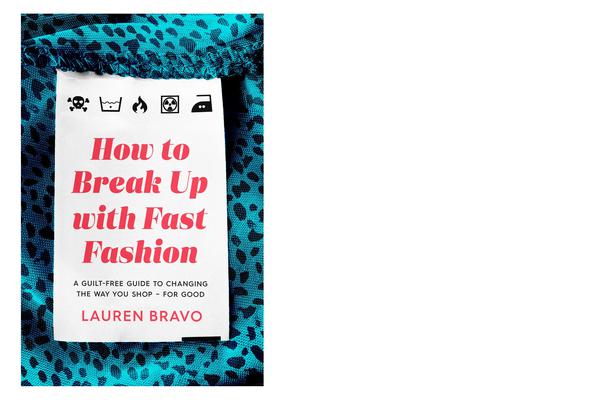 • How to Break Up with Fast Fashion by Lauren Bravo, published by Headline, hardback $31, or buy the e-book ($17.50) from Google Play, iBooks or Booktopia.