Known for his explosion of colour and print, the fashion world mourns the loss of a pioneering designer who put Japanese and French fashion on the map

Kenzo Takada, who has died of Covid-19 aged 81, was the Japanese fashion designer whose use of bold, bright colours and flower prints, often jarring in their juxtaposition, was matched with a theatrical delivery in his shows.

He was known throughout his career simply as Kenzo, a diminutive that belied a flamboyance which marked him out as one of the leading innovators of couture to have emerged from Asia during the 20th century.

Making Paris his home in the mid-1960s was to shape his vision as much as his Japanese heritage.

“I am Japanese. But the company is French and I operate in France, so I consider myself a French designer,” he stated. From the early 1970s, Kenzo developed a strident approach to imagery in his collections, drawing on the flower-power motifs of the 1960s and the block-colour screen printing of his home country.

His breakthrough came in 1970 when he staged his first show at the Galerie Vivienne, the 19th-century passage running between the Palais Royal, the Grands Boulevards and the city’s stock exchange. He set up his first shop, Jungle Jap, in a former antique shop in the Galerie and renovated it himself, painting the Second Empire walls with huge murals of trees, lotus flowers and reclining nudes. “Nature is very important to me,” he said. “Part of me is an ecologist.”

Kenzo created an environment for buyers and fashion critics that was a heady mix of the tropical paradise of Henri Rousseau and the chic urbanity of a young designer with an Eastern vision. The following year his designs first appeared in American Vogue. It positioned him firmly on the international fashion stage, and for three decades he was a popular fixture on the couture circuit.

“I cannot change the image that I have created very much,” he acknowledged shortly before retirement. “I find minimalism rather difficult.” Certainly, his catwalk shows were not modest in their ambition. In 1978 and 1979 he hosted two celebrated extravaganzas in a circus tent with models mixing with a ringmaster, horses and an orchestra. The show stopper was Kenzo circling the arena on an elephant.

His signature brand proved both commercially and critically successful, resulting in his eponymous Kenzo label being sold in 1993 to the LVMH group, the luxury marques company that also includes Louis Vuitton, Givenchy and Donna Karan in its portfolio. He continued at the company as its chief designer for a further six years.

Kenzo Takada was born on February 27 1939 in Himeji in the Kansai region of Japan, where his parents were innkeepers. He gained an early interest in fashion and design from reading his sister’s magazines and yet felt, in 1958, an obligation to enrol at the University of Kobe to read Literature.

A literary career did not beckon. He soon became bored and, against the wishes of his family, moved to Tokyo to study at the Bunka Fashion College, where he was one of the first male students.

In 1960 he won the prestigious Soen Prize, awarded by a Japanese fashion magazine of that name to an emerging designer of distinction. On graduation he worked for the Sanai department store as a designer of girls’ clothing, creating up to 40 designs each month.

But it was in Paris, to where he moved in 1964 and would live for the rest of his life, that his work settled into a cohesive style. On arrival he immediately tried to break into its cloistered fashion scene. He attended shows, networked furiously and sold his fledgling designs, mere sketches, to contemporaries such as Louis Feraud.

After the Galerie Vivienne shop made his name he moved to new premises on Passage Choiseul in the second arrondissement, at which point his clothes drew more attention from the trade and the public. His distinctive appearance, which morphed over the years from mop-topped bohemian to the baronial gent, made him an ideal ambassador for his designs and found him in the company of Elton John and Alain Delon. And the extravagance of his shows continued, flavouring the pomp of the pret-a-porter industry with the spice of trapeze artists and cabarets.

Kenzo in 2008: 'I cannot change the image that I have created very much,' he once said. 'I find minimalism rather difficult.' 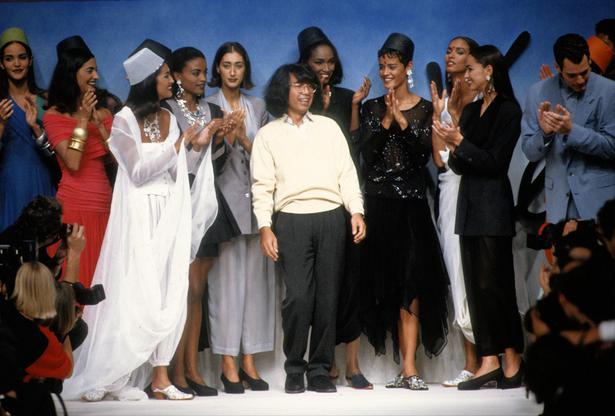 Once again he blended the old and the new with moddish suits and overcoats dashed with vivid hues. “Since men must work, they must be classy, but they also must be traditional as there is much resistance to change,” he explained. “I will maintain the classic base and maintain the fibres to match the times.”

As with many fashion labels, he expanded into the lucrative world of perfumery (in his case in the late 1980s). His inaugural line was Kenzo de Kenzo, and further scents followed, including Parfum d’été, Le monde est beau, L’eau par Kenzo and, in 2000, FlowerbyKenzo, which was to become the brand’s signature scent. A men’s fragrance, Kenzo pour Homme, arrived in 1991, followed 10 years later by a skincare line, KenzoKI.

He retired from his eponymous house in 1999 and passed over management duties to his two assistants. In 2003 the Italian designer Antonio Marras joined the Kenzo brand and, in 2008, was named creative director. By then, however, the legacy of the LVMH buy-out had soured for Kenzo himself. In 2005 he sued his former employer for illegal use of the Kenzo logo and requested 6.4 million euros in unpaid royalties. LVMH settled the case out of court.

Kenzo came out of retirement in 2005, with a focus on objects and furniture. His new brand, Gokan Kobo, meaning “workshop of the five senses”, saw his trademark brilliant bouquets emblazoned on ceramics and glass instead of cloth. His last passion, having distanced himself from the high stakes of international fashion, was for the smaller canvas of portrait painting. The artists of his adoptive country had always been an influence on his ready-to-wear lines.

“In France I have seen the works by painters. France is the most suitable place to view beautiful coloured objects, which have inspired me greatly, and also changed and nurtured my eye.”

In 2010 he showed a series of eight self-portraits at Studio 55 in Paris. “Art and fashion are really not that different,” he declared at the opening. Illustrating the point, all eight works featured the designer in various flower-printed kimonos. In 2019 he designed costumes for the production of Madame Butterfly by the Tokyo Nikikai Opera Foundation, and in January 2020 he announced that he would be launching a new lifestyle brand named K3.

He was made a Chevalier of the Légion d’honneur in 2016.

The death of the progressive judge who advocated for gender equality, abortion rights and same sex marriage will set off a tita...

The legendary designer’s final collection was delivered with a tribute, but without sentimentality — as he would have wanted it...