James Scully is an advocate for diversity and protecting the rights of models in the fashion industry. Picture / Jesse Dittmar for the Washington Post

James Scully did not intend to become the public scold of a global fashion industry — one that views models as interchangeable widgets, that strong-arms them into unhealthy weight-loss regimens and insists on referring to them as “girls”.

Nonetheless, the veteran casting director has emerged as one of the most vocal agitators for change. He wants the fashion industry to treat models like human beings rather than commodities.

READ: Why Carb-Free Diets Aren't Good For You

Earlier this year, several models came to him complaining about their treatment at an audition for the Fall 2017 Balenciaga runway show — the kind of prestigious booking that could pave a young model’s way in the business.

Not only had some 150 hopefuls waited hours for the chance to be one of 47 chosen to walk in the show, they had been left languishing for hours in an unlit stairwell while the casting directors went out for lunch.

Incensed, James took to Instagram to call out the Balenciaga team. But he wasn’t done yet. In that same post, he claimed that representatives of the French fashion house Lanvin told model agencies not to send black women to its auditions.

Finally, he voiced his suspicions that underage models were being booked in Paris, where 16 is the standard minimum. “I made the post out of personal outrage,” James says.

His alert led to apologies from Balenciaga, as well as denials and explanations from Lanvin and the casting directors accused of wrongdoing. But more than anything, James’ words — a rather modest call to arms, on the face of it — managed to add fuel to an ongoing conversation about the often unprofessional, disorganised and offensive treatment of models by their own industry.

The frock trade has always been far grittier — and seamier — than its glossy trappings would suggest. There have been dramatic examples of drug abuse, deaths from eating disorders and sexual misconduct. But there are far more stories of mistreatment by omission or disregard.

Models are expected to wait hours at an audition. They have fittings that last until the wee hours of the morning for which they receive no overtime pay. Sometimes they are paid for their services in clothes, not currency. They can wind up as nearly indentured servants — working to pay off debts to their agencies.

And often designers and their staff even fail to recognise that models need water — as became clear during Kanye West’s presentation on Roosevelt Island last summer, when unpaid models collapsed in the September heat.

“I’m trying to make people realise the human cost of this behaviour,” James says. “We have normalised it and become desensitised to it.”

The Council of Fashion Designers of America offers some guidance — all of it optional — about providing food and water backstage and at long fittings, about not booking unhealthily thin models, about striving for diversity. The New York legislature passed a law in 2013 giving models under 18 protections similar to those that govern child actors, such as limits on work hours and regulations regarding pay.

But there are loopholes. And models aged 18 and over are essentially on their own, says Sara Ziff, who in 2012 founded the Model Alliance, an advocacy organisation for models working in the United States.

“I make sure parents understand that their child might be pressured to miss school,” says Sara, a former model. “There are a lot of adult pressures that come with working in the industry at a young age.” 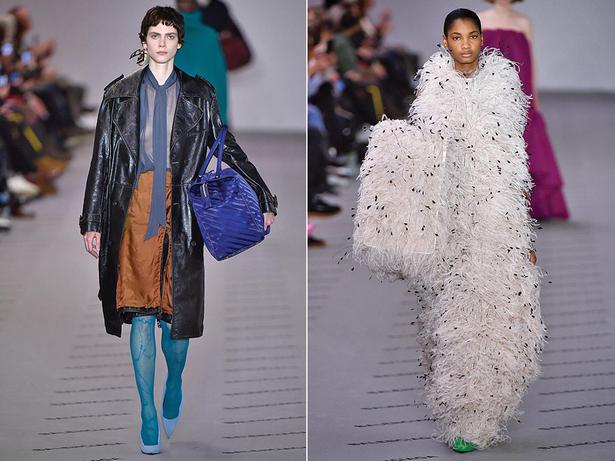 Models on the runway at the Balenciaga Fall/Winter 2017 collection. Pictures / Oliver Claisse for the Washington Post

In the past, models were typically in their 20s, with a sense of how the industry worked, by the time their careers gained traction. “Now it’s all accelerated,” James says. Today’s models are “being asked to do a woman’s job, and they’re kids”.

The potential for abuse has grown with practices such as street casting, in which designers invite everyone from friends to their favourite bartender to participate in a show. The philosophy suggests that almost anyone can be a model — at least for a few hours. The churn of fast fashion means that not just clothes are disposable; people are, too.

“Girls are seeing this big dream world through social media. They think they can be a model and don’t realise what they’re getting into. The turnaround now is so fast; it’s almost like trafficking,” says James, who sits on the Model Alliance advisory board. “They’re pulled in and traumatised and then spit back out.”

James, in his early 50s, is tall and slim with neatly trimmed salt-and-pepper hair, a jutting jaw, and a resting expression that is pleasantly sombre — supporting-actor handsome. His Manhattan apartment is filled with calming earth tones and nubby textures. He is the picture of earthy serenity by way of Architectural Digest.

But when he speaks, it’s at full gallop, his voice filled with the agita of someone whose childhood fantasy-come-true has gone bad.

One of 10 children in a working-class family, he spent his early childhood in South Amboy, New Jersey, a small city about an hour outside Manhattan that was almost all white and largely Catholic. “It was the smallest town with the most bars,” he says. “I’d never been around an Asian person. I didn’t know what a Jewish person was.”

READ: Why Fashion is No Longer Child's Play

He was transfixed by acting after an aunt took him to see Pippin on Broadway, but he loved fashion, too, thanks to an older sister with a stash of Cosmopolitan magazines.

He enrolled at the Laboratory Institute of Merchandising (LIM), where he took a class taught by Audrey Smaltz, a former host of Ebony Fashion Fair and founder of the team of backstage dressers and assistants called the Ground Crew. James became her intern.

His freelance work with her helped pay his way through school until he was distracted by jobs in retail and nightlife. His grades fell, he lost his scholarship and dropped out.

He got a job at the influential fashion boutique Charivari, later worked for the production company Kevin Krier & Associates, and then Harper’s Bazaar. James’ career helped him see the fashion industry from virtually every angle.

“He’s been a part of fashion shows since the early 90s and he’s seen a lot in that time,” Audrey says. “He’s seen all that’s happened and how it’s changed. It’s not nice.”

She recalls when a runway show featured 10 to 15 professional models, and each would make three or four changes in a single show. Today, a show hires 50 women. Mostly, anonymous. No clothing changes.

“How can you pay all those models? They try to pay the models in clothes,” Audrey says. “You don’t need anyone with experience. They’re like robots. Some directors tell the girls: Do not smile. Do not clap. It’s one model after another.” It’s a human conveyor belt.

James’ foray into activism began in the mid-2000s, but the seeds had been planted earlier. As a teenager, his vision of fashion was shaped by images of the multicultural aesthetic of Saint Laurent and Halston in the 1970s — an ideal he continued to carry into his career.

He went on to work on some of the most influential runway shows of the late 1990s, including those mounted by Tom Ford for Gucci and Yves Saint Laurent, whose casting was particularly diverse.

Ford’s shows helped turn the Ethiopian-born model Liya Kebede into a star. In 2003, she became one of the faces of Estee Lauder — the first black model to represent the beauty brand. 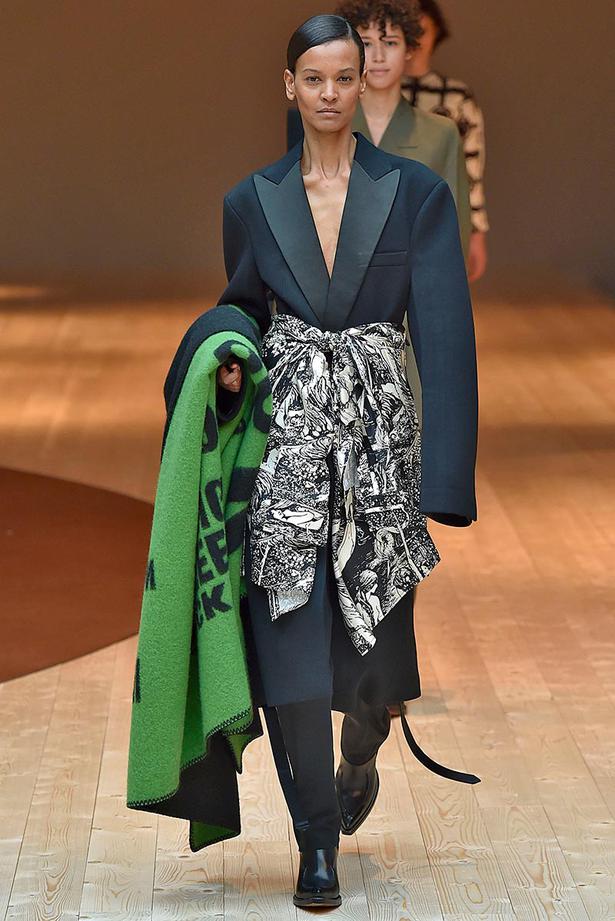 But the prejudices Kebede faced along the way exasperated James. A few years later, after taking time away from the industry, he joined activist Bethann Hardison, models Naomi Campbell and Iman in industry town halls, panel discussions and a media blitz to highlight the lack of black and brown models on the runway.

Bethann, a former model and agent, worked to mentor more women of colour, and men. James pushed to cast more of them in shows.

“He speaks his mind. That’s who he is,” Audrey says. “I just thought, ‘Good for you, Scully. Take care of these young girls.’ “

In May, he was honoured by the Black Alumni of Pratt Institute for his efforts.

In the winter of 2016, James delivered an impassioned talk at a Business of Fashion conference in Europe about labour practices that include bullying young women and treating puberty like a career-killer.

His February Instagram post, with more than 9700 likes, received overwhelmingly positive feedback. “Change is on the way thanks to you,” wrote model Karolina Wallace.

“It gives me a lot of hope to know that there is someone like you fighting for better treatment of models,” wrote Gwen Van Meir, a young model. “I once [was] in Milan, waited at a casting for almost four hours in the hot sun, with no water available ... It seemed like a lot of the models were afraid to say anything.”

Over the years, the very nature of what it means to be a model has shifted, from one of performer — and experienced professional — to that of an anonymous, pre-pubescent-looking mannequin.

Only a few savvy young women of this era — Gigi Hadid, Karlie Kloss, Kendall Jenner — have successfully positioned themselves as full-fledged personalities with the potential for professional longevity. That’s largely thanks to their diligent off-the-clock efforts on social media.

But models have few work protections. They’re not unionised. Financial agreements with agencies can be opaque. Pressure to lose weight is not just a medical concern but also a labor issue, says Sara of the Model Alliance.

“I think that many of the problems James called out — models waiting an inordinate amount of time, working through the night, not having breaks — all of that is a symptom of a bigger problem,” she says. “And that’s a power imbalance.”

Modelling has always been unregulated. And a model’s career was always relatively short and reliant on a certain amount of good timing and genetics. “But there was a code of ethics and on some human level, you did care” about models, James says.

“Now it’s really about being clothes hangers,” he says. “They’re disposable and replaceable.”