On the surface they are striking images of fashion designer Karen Walker modelling for the first time ever as she becomes the face of the campaign for her latest eyewear collection, Transformers. Dig a bit deeper and this campaign sets out to explore the many guises all of us create to face the world. Shot, appropriately enough, in Hollywood — the home of glamour, transformation and reinvention — it takes inspiration from populist artists such as Cindy Sherman, Robert Mapplethorpe and Andy Warhol and, as Karen explains, reflects her own life in the need to be “more than one woman” on a daily basis.

Expand on the idea of needing to be “more than one woman” — what does that mean and why explore it through the campaign?
This is just a reflection of people I know and myself — we’re made up of many different identities and have many different roles that we push to the front when appropriate. Being yourself isn’t as exciting as being lots of people. I don’t know if people really know who “themselves” are actually. I think most of us have many versions of self.

This is relevant to this eyewear campaign because we find that when people put on eyewear they feel transformed into a new role or new character or a heightened version of some element of themselves. Of course, all this is especially apparent in the world of social media — where people have an edited/perfected/controlled/filtered version of themselves (and what they eat and where they travel) that they’re prepared to present to the world. Conversations around women and their influence, power, vulnerabilities are especially topical right now, following the Women’s March — something passionately supported by the fashion industry. How can fashion as an industry acknowledge these conversations and movements in a way that feels authentic?
First of all, the best way to feel authentic is to be authentic. And I think the best way for the fashion industry to acknowledge the conversation around women and their influence, power and vulnerabilities is to embrace the multiple possibilities that women can be and are.

You’re front and centre in the campaign, something you haven’t done before — why cast yourself?
We felt that for the idea to work there needed to be a certain amount of familiarity — a base from which to create all these different characters that would disorientate/surprise/amuse the viewer.

James Dean, Dolly Parton, Princess Margaret — how do these various personas reflect the message behind the campaign and how did you settle on each? Why not all women?
This isn’t about masquerading as these people. The characters we created are all fictional using a bunch of different people, real or imagined, as jumping off points. They represent the heightened reality you feel when you put on a new pair of shades. The idea of masculinity and femininity colliding has always been at the core of the Karen Walker brand — we always look to both the masculine and the feminine in our work and love it when the two collide. 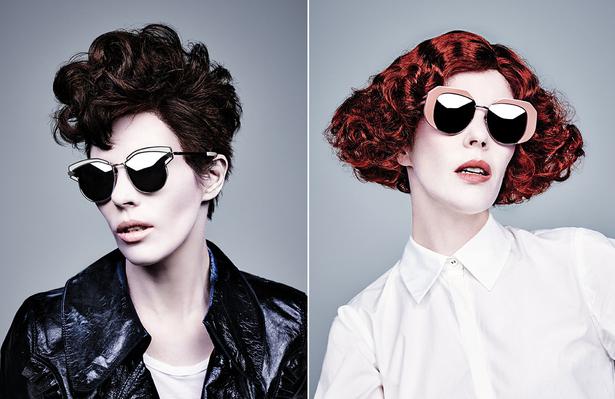 You were part of a panel at the Cindy Sherman exhibition in Wellington last year, how did that — and Cindy’s wider work — influence the campaign’s message?
I’ve always been a big fan of Ms Sherman and what I love about her work is the idea of manufacturing characters and vandalising popular culture. Another thing I really love about her work is that she predicted the idea of the selfie and the edited version of self, which is exactly what social media has brought to the everyday and every person. This campaign was shot a couple of months before the exhibition opened but Ms Sherman, alongside Mapplethorpe and Warhol, was very much part of the idea.

Self Portrait, one of fashion’s favourite new cult brands, moves into accessories