There is a reason people are drawn to Kelly Slater. Aside from his obvious merits — sporting prowess, savvy business acumen and piercing good looks — and despite a reputation that elicits awe, he’s the kind of laid-back guy you could imagine sitting on a beach in Baja with, drinking Coronas and musing on the meaning of life.

This 11-time world surf champ, both the youngest and oldest person to win the world title, attracts a universal following — from the many sponsors and charities he’s endorsed over the years to the famous women he’s dated, including Cameron Diaz, Gisele Bundchen and Pamela Anderson.

At 44, he continues to inspire a legion of fans across the globe — some die-hard surf fans, and others who simply admire his consistency and commitment to the sport. He is idolised, with an impressive social media following of 500,000 Twitter fans and 1.6 million on Instagram. In January, Slater rescued a couple and their infant child from a rogue wave on the Kamehameha Highway in Hawaii — an act that reinforced his heroic aura.

He’s appeared in films, modelled for Versace and was photographed by Bruce Weber for the May 1996 cover of Interview Magazine under a cover line that might sum up his life story: “Half Fish, Total Dish — This Guy Could Save Our Water”.

In Garbage’s 1999 music video You look So Fine, Slater lay unconscious on the seashore like a tragic Adonis, his Floridian tan the perfect foil for frontwoman Shirley Manson’s pre-Raphaelite red hair and porcelain skin.

Slater has written two books, plays golf with a four handicap and can play the guitar with equal finesse — a guest appearance on stage with Pearl Jam in 2006 just another tick on an impossibly cool bucket list.

Last December he revealed the Holy Grail for surfers — an artificial wave pool he’s been working on for the past decade, its solar-powered technology an example of Slater’s commitment to the environment. His other ventures include a sustainable surfboard company (Slater Designs) and an organic energy supplement business.

“Surf culture represents individuality. I think back to the early days of surfing, like the early shortboard period in the 60s and 70s. It was a real counter-culture revolution. There were peace-loving hippies who hated war and loved surfing.

They became expats and travelled around to just surf and get away from the war. That was a real part of the surf culture in my mind.”

Speaking exclusively to Viva from Sydney, at the Australian launch of his fashion lifestyle brand Outerknown, Slater explains how his approach to everything stems from his passion for surfing.

“To most people, surfing’s not really a sport. It’s an art form or a way of life. It speaks to everyone from different walks of life who are passionate about it and spend their lives planning around it. It’s a very diverse culture,” he enthuses.

Surfing, of course, has been the backbone of brands such as Billabong and Rip Curl. (The latter was forced to apologise in February after being accused of manufacturing garments in North Korea under “slave-like conditions”.) But it was the longstanding relationship between Slater and American surfing giant Quiksilver that dominated the surfing world for 23 years until 2014, when Slater announced he was leaving to start work on his own lifestyle brand. As with the end of any lengthy relationship, fans were shocked. 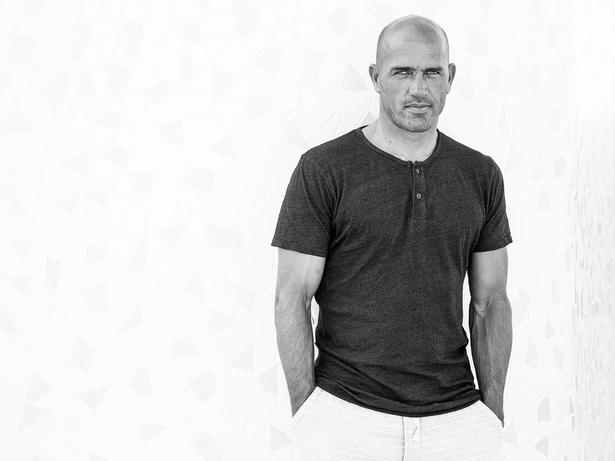 Outerknown is described as an eco-conscious casual line, with a mantra based on having a strong social responsibility. The Culver City-based brand partners with the Fair Labour Association (FLA), and uses organic cotton and fishing nets in its designs. Its commitment to the environment has been its objective from the beginning. It was crucial to the brand to deliver a clean supply chain at a time when other celebrity brands are easy targets for unforgiving critics.

“We have the advantage of building this sustainably from the ground up. There is a saying that you are what you eat, but you also are what you wear and you are what you say and you are how you act,” says Slater. “Shelly Gottschamer, our sustainability officer, is the one who really knows the ins and outs of every supplier and has instilled those values into our code of conduct.

“She always says true sustainability comes through transparency, so we aim to be completely transparent with our supply chain — and that’s better for everyone involved.

“It’s interesting for me, not being a fashion guy and coming from outside that world, because I’ve been able to question parts of the process to see if there is a better way to do it. And a lot of the times there is. We aren’t 100 per cent sustainable yet, but that is our goal.

“We had to make those decisions early on about how far do you go into the supply chain in terms of ethics. Do you just care about using organic and recycled materials or do you care about the people who make the clothes? We voluntarily chose to get FLA certification, which means that every person who works on an Outerknown garment is being treated fairly.”

The brand's debut in 2015, however, was met with outrage from some fans who had grown up watching Slater wear more accessible, affordable brands. All they saw was their hero being aligned with a premium-priced range of clothes.

The fact its backer is Kering, the Paris-based luxury group that has also invested in Gucci, Balenciaga and Stella McCartney, sat uneasily with those unfamiliar with the luxury world and its prices.

Slater was quick to respond and explained via an open letter to the public on the official World Surf League website.

“People were surprised, as our prices were higher than typical surf brands,” he explains. “We don’t want these clothes to be out of reach for people but it costs more to produce clothing in an ethical way. Our pieces are really well made and we are finding once people buy the clothes they keep coming back. Right now we are tiny, so our orders with our factories are small, which contributes to higher prices. We know that as we grow, we’ll eventually be able to make bigger orders and our prices will reflect that.” 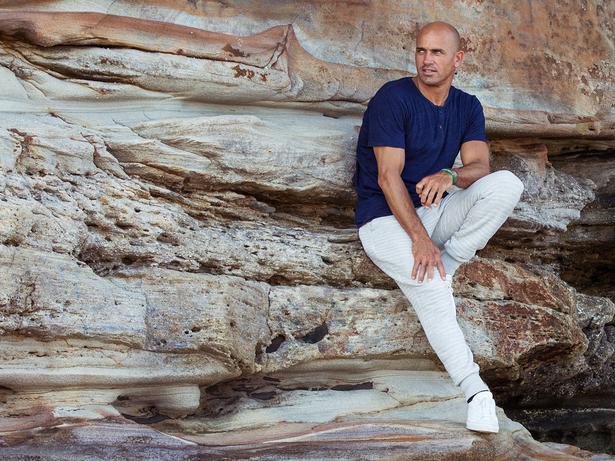 Living between Florida, Hawaii, Australia and Southern California, Slater is well-positioned to create a lifestyle brand that appeals on a global scale.

The creative director for Outerknown is his close friend, menswear designer John Moore, whose work is complemented by another business venture, POP studio, a multidisciplinary design studio that works with clients such as Pepsi, Quiksilver and the Beverly Hills Country Club.

With Moore, who also previously headed retro surf brand M.Nii, Slater wanted to create a brand built on connecting like-minded consumers who had grown up with the surfing way of life.

“Outerknown is infused with surf culture in subtle ways. It definitely informs our mindset,” he says. “It’s pretty easy working with John, as we had worked together before we started Outerknown.

“A lot of times, it’s just me sending him an idea I have in my head and he runs with it, then sends me some kind of picture about what I’m talking about. Like the other day, somebody had sent me a map of the way currents work in the Pacific Ocean, and I sent it to John and said, ‘This would be a great print for a trunk’.

“Most of those things are going to be some subliminal message around either health or surfing. Or politics,” says Slater, laughing. “Those are even more subtle.”

And he’s thrilled by technological advancements the brand is making, for example working alongside high-tech companies such as Aquafil, a world leader in nylon manufacturing.

“It’s cool, man. We visited the factory in Slovenia that makes the recycled nylon we use in our trunks and outerwear.

They make it from recycled fishing nets that are taken out of the ocean, so that really connects back to the water for me.”

“When we started Outerknown, we knew we were doing something different and it wouldn’t be easy, but man, we were surprised by how challenged we were. I think it’s evolution and an awakening for people. With the wealth of information through the internet now, it’s easy to research things for yourself and get unbiased information. I think all different industries are starting to fall in line with that same kind of belief.”

For the foreseeable future, Slater is enjoying the projects he has on the go, while still finding time to pursue his number one passion.“I feel like the last couple years I have been planting seeds, and now things are growing for me. So I’m really looking forward to stuff with the wave pool and more of the board.

“I had a taste of it in January where I won 2016 Volcom Pipe Pro in Hawaii. It was the first event I’d won in two years, and also the last event I had won two years ago. I’m looking forward to making that happen again.”

My heroes are: It would probably embarrass him, but Jeff Bizzack (my business partner) is one of my heroes. He has worked with me on a number of different businesses, and he is great influence, personally and professionally.

I have heroes in surfing, in culture and throughout history. I’ve been a huge fan of Nikola Tesla for over 20 years now. I’ve been reading about him and studying what he did in his life.

As a kid, my all-time hero was Tom Curren, who I felt was the greatest surfer ever. Tom and I are good friends to this day. I like people who aren’t afraid to think differently — out of the box — and I admire people who are comfortable with conflict because I’m not super comfortable with conflict. People who will get right in someone’s face to try to make things right in society or politically, I think are cool.

My favourite Outerknown pieces are: the Evolution Pocket Trunk is definitely my go-to. It’s made of recycled nylon and it’s just a great amphibious trunk that I love. If I could wear those every single day I would. Then I like having a hoodie for flying. That’s my go-to travel piece — the Reflections Sweats and the Carry-on Hoodie.

My favourite places to surf in New Zealand: There are a tonne of great waves in New Zealand, especially along the East Coast that only work on cyclone swells. You’ve got to be there for a few hours or a day here and there. I actually want to rent a campervan and travel around New Zealand for six weeks or two months at some point and really explore the South Island, too. Raglan’s the spot everyone knows. Also Shipwreck Bay up north is where people mark on their destinations of places to go at some point in their lives. But yeah, there are tonnes of beautiful places in New Zealand.

The last song I downloaded was: Cool by Anthony Hamilton. I love this song.

I’m currently reading: Old School Kung Fu that my friend Eric Hunstad wrote. He had studied and was a master of kung fu. He was scared he was going to forget it after 25 years, so he wrote down everything he knew.

Waking Up at 6.30am with Professional Surfer Paige Hareb

In 2008 surfer Paige Hareb became the first New Zealand woman to qualify for the ASP Women’s World Tour. She takes us through h...

If environmental activist, artist and educator Peggy Oki cares about anything more than surfing and skateboarding, it’s whale...