The drag star divulges why she's wearing the T-shirts, and how they'll help the local queer community Kita Mean is used to young queer people coming to her to “spill the good, the bad, and the ugly”. The drag star, who hosted TVNZ’s House of Drag, won Ru Paul’s Drag Race Down Under last year, and has gone on to become an uplifting local icon in the rainbow community both here and overseas, says there’s something about drag queens that makes people feel safe to open up.

Now Kita is putting her contagious smile, outlandish sense of style and natural charm to good use in the fashion world, as part of a campaign for London-based brand COS for the release of limited-edition T-shirts designed by creatives from the queer community. Lensed by Karen Inderbitzen-Waller and Delphine Planqueel, Kita dons each design from the new ‘Love for All’ range – available at COS’ Newmarket and Commercial Bay stores. The ‘Love for All’ collection has been designed by US-based designer and creative director Zipeng Zhu, UK-based performance poet, trans-visibility campaigner and model Kai-Isaiah Jamal and French musician and award-winning actor, SOKO. One hundred per cent of profits from the T-shirt sales will go to OutLine Aotearoa, an all-ages LGBTQIA+ organisation providing mental health support to the rainbow community, their friends, whānau and others.

The fact that locals in the rainbow community stand to benefit from the international collaboration is what made Kita enthusiastic about the campaign, she says. “COS genuinely want to support a community and for all of the profits to go to a local charity, that’s stunning.”

She was also blown away by the designs. Rather than “slapping a rainbow on something,” the gender-neutral t-shirts are an expression of the designers’ individuality. Zipeng’s bold typography forms a colourful rainbow smile Love emblem, while SOKO embraces the title of her powerful pride anthem, ‘Oh, to be a Rainbow!’ Kai-Isaiah has written an original poem, putting words to experiences that can be hard to express.

The sartorial expression is all about celebrating Pride, the community-led movement against discrimination. “Just because we’re lesbian, gay, bisexual, trans or any other orientation, it doesn’t dictate our character whatsoever,” says Kita. “We are declaring to be seen as equals.”

She’s used to people asking her if Pride month is necessary these days given homosexual law reform, legal same-sex marriage, and an ever-growing global shift towards a more inclusive society. But humanity will never be perfect, says the drag star, who says she sees evidence of the “massive prejudice” that’s still out there. “If you look at the suicide rates of queer youth or the murder rates of transgender people you know it’s outrageously off the charts,” she explains. “You have to ask yourself why, because biologically there’s nothing wrong, it’s the fact that society is dragging these people down, and there’s still such a fight to be had.” While Auckland Pride month is traditionally held in February (and at different times of the year throughout the country), Kita says the frequency of celebration is positive and necessary, as it keeps the values the movement strives towards – inclusion, equal rights, respect – front of mind.

At the heart of the COS ‘Love for All’ campaign is OutLine, the confidential, free, 24-hour phone service that provides counselling to those in the queer community. It’s a long-established service that Kita says she wished she’d known about well before she came out at the age of 21.

As a teenager, there was a large part of her identity that she kept suppressed, through fears about what people would say or friends she might lose. “I had no understanding of the support that was out there, I was just in the dark,” she says. “You feel very alone but when I finally discovered these things like OutLine, you realise the work they do is so important because everyone needs someone to talk to. You’re not alone.” 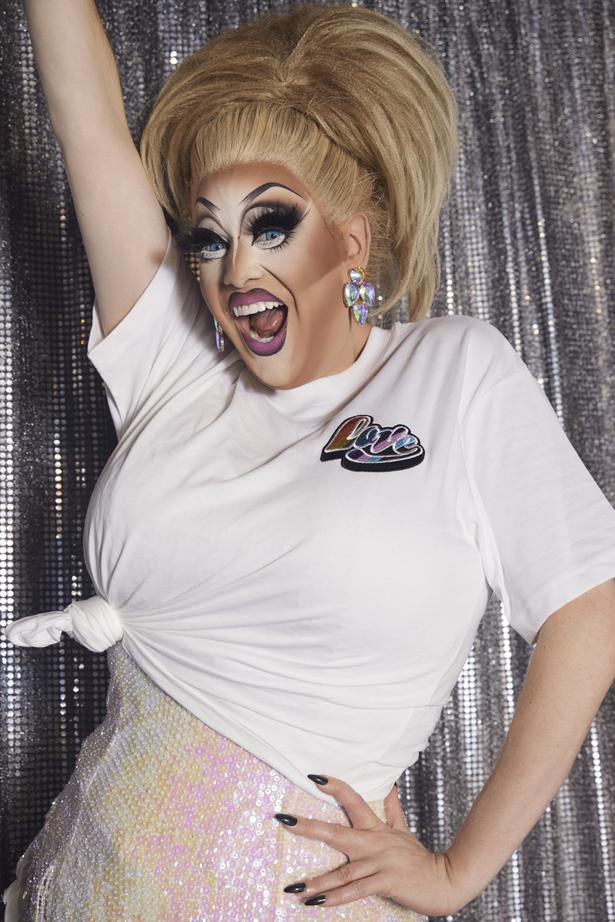 Her life today is something she couldn’t have envisioned as that anxious teen. Since winning Ru Paul’s Drag Race Downunder, Kita is about to embark on a two-month tour of the US with several other drag stars, in what she says will be a once-in-a-lifetime opportunity. She has also recently spent a hugely rewarding two months in Australia, performing her one-woman show. And she continues to inspire others through her job as a drag queen, a larger-than-life vocation she says ensures that her permanently happy, “brows-up-to-my-hairline” expression is genuine.

“It took me to 21 to start changing my life, but I can only imagine what things would have been like if I was doing that when I was 13, 14,” says Kita. “I always say, everybody’s journey is different. But the best thing that I ever did was just to live authentically. It wasn’t an overnight process but as soon as I decided I wasn’t going to worry about that stuff, my life changed and things started happening for me. The biggest barrier in my life became the biggest catalyst for change.”

Kita says she always encourages young people who come to her to prioritise their safety – physical and psychological – particularly when considering coming out to friends or family. She also acknowledges that this is where charities like OutLine are vital for those who need them, as they provide support for anyone experiencing loneliness, confusion or isolation that can come with grappling with gender identity, along with advice on healthcare and meeting people.

Given OutLine is a charitable organisation that relies on donations, the COS ‘Love for All’ campaign has the potential to make a meaningful impact. “It’s always important to remember that Pride doesn’t stop,” says Kita. “It’s not just a once-a-year thing, and it’s not just a t-shirt. It’s something that’s very real, and there’s no harm in reminding people we shouldn’t be hating on others. We should absolutely be loving everyone unconditionally.”

The COS ‘Love for All’ Pride T-shirt capsule is available in limited quantities at COS Newmarket and COS Commercial Bay.
Learn more about OutLine’s work and show your support via Outline.org.nz and @OutLineAotearoa on Instagram