Alexandra Byrne might live in our modern world, but it seems she is almost as familiar with that of 16th-century England. An Academy Award-winning costume designer, she is responsible for the incredible clothing seen in the anticipated historical drama Mary Queen of Scots, which has just been released in cinemas in New Zealand.

The film tells the story of two of Britain’s most significant female rulers, Elizabeth I of England and Mary Stuart of Scotland, as they both seek to assert their claim to the throne. Starring Margot Robbie and Saoirse Ronan, it is a visually stunning tale helmed by two headstrong women.

READ: How 'A Wrinkle in Time' Dressed Oprah, Reese & Mindy

Alexandra found she responded instinctively to the script, thanks to her prior work on films such as Elizabeth, starring Cate Blanchett, Elizabeth: The Golden Age (for which Alexandra won her Oscar), and Hamlet. “It’s a period I’ve worked in before and like very much,” Alexandra says, speaking from London. Searching for a single material to tell the story in a controlled way led Alexandra to denim, which formed most of the film's costumes. Photo / Supplied

Growing up in Stratford-upon-Avon, a medieval town in England and the 16th-century birthplace of William Shakespeare, meant she spent much of her early life in the world of Shakespeare and theatre, so feels somewhat at home with the era.

Although she has worked with another version of Elizabeth previously, the stories are completely different, she says. “We’re not making drama documentaries — how you make the clothes starts as a response to the story, from the script and how the director wants to tell that story.” This particular story, she says, is about two queens and how they manage to maintain their royal status in a world of predatory men.

When designing their costumes, Alexandra focused on each queen’s journey of how they came to throne. Because the film's aim wasn't to be 100 per cent historically accurate, she was able to use her own creative licence to interpret their wardrobes.

“Elizabeth was very bright and well educated — as a child she was declared illegitimate, so she learned to be strategic when she grew up. She also knew the power of her appearance,” she says. “Elizabeth executed one of the earliest PR moves, I think, in that she understood the power of her image in newly Protestant England, and she used that image to replace the iconography of the Virgin Mary.” Alexandra wanted Elizabeth’s dressing style to be strategic for each occasion, and used colour changes to frame her journey, from when she is a youthful queen to after she contracts smallpox and survives but is disfigured.

“At this stage, she was ill and undermined by reports of Mary’s beauty. She had a loss of self-esteem, and that’s where I take the colour out of her clothes as she goes under the radar.”

Mary’s roots were very different, says Alexandra. Named Queen of Scotland when she was six days old, she married King Francis II of France at 16 and a year later was widowed, after which she returned to Scotland in mourning, stripped of her titles and her lifestyle.

Mary is the more practical of the two queens, and figured out how to make her situation work to her advantage upon her return to her homeland. Alexandra used blue, the colour of Scotland, as the key shade in many of Mary’s costumes, increasing the saturation as she grows in her authority and self-esteem. 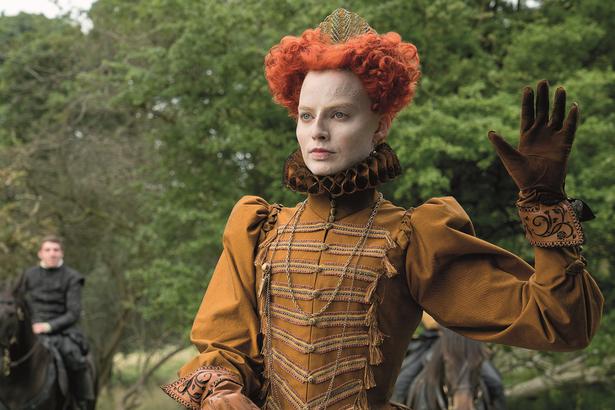 Alexandra wanted Elizabeth’s dressing style to be strategic for each occasion, and used colour changes to frame her journey. Photo / Supplied

In the pivotal scene of the film, the two queens meet face-to-face in a fraught and dramatic exchange, something that didn’t happen in real life, but is an essential part of this interpretation. “I didn’t want the costumes to be distracting at this point in the story,” says Alexandra, “so having figured out their story arcs within the film, it was important to work out the tone for the meeting and work in reverse.”

She also wanted to avoid the film becoming an endless parade of different dresses. Limiting the materials to one fabric meant Alexandra could tell the story in a more controlled way while manipulating this single material. This led her to choose denim, which was used in myriad ways for the main characters’ costumes as well as most of the background extras.

“We filmed in Scotland and weather is a huge factor. Mary was living there and she was a vigorous, outdoor woman, so I wanted a fabric for her that actually got better [with wear]. The dirt and the patina became the decoration on her clothes; mud, salt from being on a boat and rust from the armour on her body.”

Using denim and reinterpreting it in 16th-century detail and silhouette was more challenging than Alexandra had anticipated. “Particularly with the men,” she says. “We have so much denim in our language today. What I realised as we started working with it was that I had to balance that modernity with the 16th century and balance that juxtaposition. I wanted the accessibility and modernity that denim brought, but that became a very finely tuned balance to get right.”

It’s not unusual for film-makers to add modern elements to films inspired by historical events; Sofia Coppola did it with the soundtrack to Marie Antoinette, incorporating contemporary music from New Order and The Strokes; Yorgos Lanthimos’ new film The Favourite, centred on Queen Anne, employs satirical modern catchphrases in its script; and Alexandra’s designs in Mary Queen of Scots avoid stiffness thanks to her innovative use of denim.

Most importantly, she says, it’s about creating a world that has credibility through which the viewer can easily transport themselves into the story. Mary Queen of Scots, with its epic landscapes and inspired clothing, is a feast for the eyes.