The Michelle Obama portrait is striking — and so is the gown she wore for it. Picture / Getty Images Designer Michelle Smith was standing in the middle of a jean shop in the Marais neighbourhood of Paris when her publicist called to tell her that Michelle Obama's official portrait had been unveiled at the National Portrait Gallery and the former first lady was wearing Smith's dress in the painting.

"I just flipped out in the middle of the store," Smith says. "I didn't know it was going to be unveiled today. Did everyone else know? Was I the last to know?"

Yes, Michelle. You were.

The dress has caused a stir not simply because it will be enshrined in history but also because it has such a central place in such a non-traditional portrait by artist Amy Sherald of a singular first lady. The full-length dress is enveloping, but regal and reassuring.

The dress, Smith said by phone from Paris, is based on one that was in her spring 2017 Milly collection. That season Smith was inspired by a "desire for equality, equality in human rights, racial equality, LGBTQ equality," she says. One of the recurring elements in the collection were various forms of lacing and ties; the details were meant to suggest a "feeling of being held back. . . . that we're not quite there yet." The finish line is still off in the distance.

Although Smith offered Obama many iterations of the original dress, ultimately she chose the runway version with only a slight alteration. The runway gown was open in back. The one Obama wears is more discreet, but includes the same corset-style lacing.

Milly is not a rarefied brand. While it's designer driven, it's rooted in American sportswear and with cocktail dresses priced at US$850 or so, it falls into the fashion category of affordable luxury: Aspirational, but not impossible.

"People have been describing the dress as couture, but the fabric is a stretch cotton poplin," Smith says. It could be called a worker's fabric, she adds. Part of the beauty of the dress is that it looks "like couture but it's made out of something spartan." 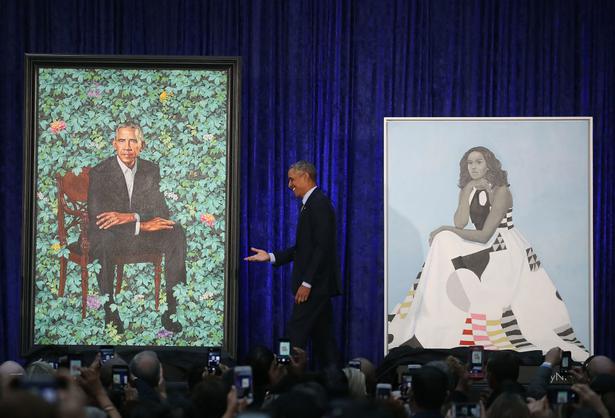 Smith, who co-owns Milly with her husband Andy Oshrin, manufacturers her collection in New York. The dress was chosen months ago, Smith says, and since she already had Obama's measurements after having created things for her in the past, it was easy to work long-distance.

The choice of a Milly dress mimics, in some ways, Obama's first significant fashion choice as the First Lady. The suit she wore to her husband's swearing-in was designed by Isabel Toledo, an independent female designer working and manufacturing in New York. Smith is similarly situated.

READ: Melania Trump and The Politics of Airbrushing

Still, it manages to draw attention to one of the elements that made her tenure in the White House so stylistically memorable: Informality mixed with protocol.

"I think what makes [the dress] so modern is the element of comfort - there are pockets in the side seams - and of being confident," Smith says. The dress is sweeping and grand, but not precious. "It's very much of our time."

As Sophie, Countess of Wessex, hits her mid-fifties, Bethan Holt takes a look at the older royals every bit as stylish as Megha...